The first stop on our big trip was French Polynesia, specifically Tahiti and Moorea. Since we didn't visit the most spectacular Islands in French Polynesia, we can't really judge its merits fully. However, nothing we saw on this trip give us any reason to prefer French Polynesia to the Cook Islands. The Cooks are just as beautiful, a little less hot, a lot cheaper, and have much better beer. Still, our stay in French Polynesia was nice enough and not a bad way to start the trip.

We arrived in Pape'ete surprisingly well rested given the long overnight flight. We had decided to start our trip on the beach, so we went directly from the airport to a ferry to Moorea, only stopping for breakfast along the way. The ferry ride was our first introduction to how things can go not quite as planned on a trip like this. We decided to take the slowest ferry, thinking it would be a pleasant ride to Moorea. The ride was pleasant enough, but the slow ferry is the only ferry not met by a bus. We spent several hours at the ferry terminal waiting for the next ferry to arrive and the buses to come to meet it. Luckily, it was a pleasant place to wait, with a nice view and a decent cafe, at which we had lunch. We finally arrived at our bungalow after two in the afternoon. We had booked into a place called Fare Manuia, and we were pleased by what saw. We had the front bungalow on a nice beach. Janine, our host, was nice as well, and drove us into town to allow us to purchase groceries at the shop. 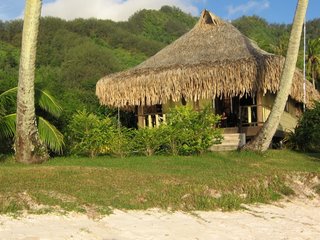 We probably would have enjoyed Moorea more had we spent more time at our lovely bungalow. Instead, we decided to spent the majority of our one full day on the island taking a walk to one of the fancy resorts at the other end of the beach. This was not necessarily a bad idea, but was made less pleasant by the surprising lack of beach along which to walk. We walked half of the way to the resort picking our way around palm trees and avoiding very non-island like guard dogs. We had to wade in the water at several points. Eventually, we gave up, and walked the rest of the way to the resort and all the way back on the road. Our discomfort level was increased by the fact that it was quite hot and humid, a condition to which we would acclimatize later on the trip, but still found unpleasant on day two. However, we did have a very good lunch at the Hotel Inter-Continental and my husband got to try the local raw fish dish, poisson cru. We were more than ready for a swim by the time we got back to our bungalow. I remember this swim in particular because while floating/sitting in the warm, shallow lagoon water, I had a moment of great happiness when I thought of the four months ahead of us and the amount of time we would spend like this. It turns out that I was not quite right about how we would spend our next four months, for although they were wonderful, we didn't spend all that much time swimming. Still, the joy of that moment is one of the best reasons to take a long trip like this.

After lunch on the following day, we took the ferry back to Pape'ete. Pape'ete is definitely not the stereotypical Polynesian beach town. It is a big city, and I found it interesting to see a big, cosmopolitan city Polynesian style. We spent one afternoon sitting on the outdoor patio of a little restaurant called La Terasse Api, watching the city go by. We particularly enjoyed our location when it started to rain, as it often did during our stay in Pape'ete. Our table was undercover, so the rain didn't bother us at all. In fact, we appreciated its cooling effect on the air. We watched the city's inhabitants and visitors go about their business, some scurrying to get out of the rain and others completely unconcerned by it. There were people from all over Polynesia, with the women often in traditional flowered dresses. There were also a range of Asians and Europeans. On the whole, the Asians looked far more comfortable in the climate than the often red-faced and sweaty Europeans did. Some of the Europeans looked so miserable that you couldn't help but wonder why they were in Pape'ete.

Our hotel, the Royal Pape'ete, was nothing special, but did enjoy a central location near the waterfront. Also lining the street facing the waterfront were several bars. We were lured into one of the bars by the oddest musical moment of our trip: the sound of "Midnight Special " done island style, complete with ukuleles. We sat down at an outside table and ordered two Hinanos (the only beer available in Pape'ete), hoping to hear some more fantastic island interpretations from the jukebox. Sadly, the music never approached the initial level of surreality again.

One of the other highlights of Pape'ete is the food. We could not afford to eat at the fanciest restaurants recommended by our guidebook. However, we still had some very good food. We ate one dinner at local pizzeria called Lou Pescadou's, which is apparently a bit of an institution. Its walls were decorated with old newspaper ads, some of which were quite funny (assuming we translated from the French properly). We ordered the Pizza Royale, which was topped with tomato sauce, ham, cheese, and an egg. The egg was on the runny side of sunny side up. The pizza was actually quite good, but not something I'll be asking for at a local pizzeria here in San Diego. The highlight of the restaurant, though, was the chef, who whistled and hummed along with most of the cheesy songs that were playing on the sound system.

Our favorite meals were at the mobile cafes that parked in the central square and night. These vans are called roulottes, and they serve surprisingly good food. We ate at the roulottes on both our first 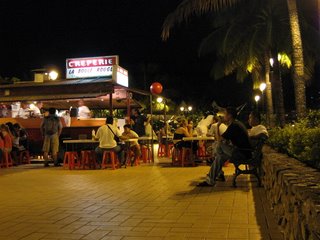 and last night in Pape'ete. We had crepes the first night and both enjoyed them greatly. My husband also enjoyed his dinner on the last night, a large and delicious steak frites. My chicken gingembre was certainly edible, but was far from my favorite meal in Pape'ete. The truly great thing about the roulottes, though, was the atmosphere. The square was full of people of all ages, locals and tourists alike, enjoying the cooler night air, the food, and the company. On our last night in Pape'ete, there was even live music on the outdoor stage next to the square. After dinner, we went over and enjoyed the music and watched the local children running around on the large cement "dance floor" in front of the stage. Eventually, some teenage couples began to dance, demonstrating that the Polynesian dancing skill goes beyond 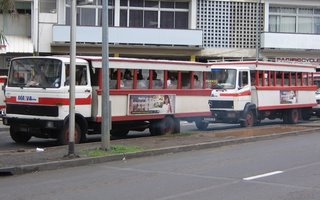 traditional show dancing. We had not tired of this show when we had to leave. We collected our bags from our hotel, caught "Le Truck", the local public transit, to the airport, and spent the next several hours waiting for our flight to Easter Island.
Posted by Cloud at 5:09 PM