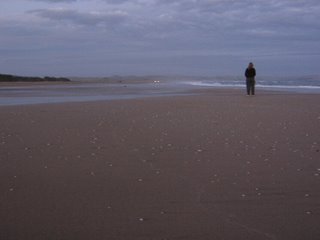 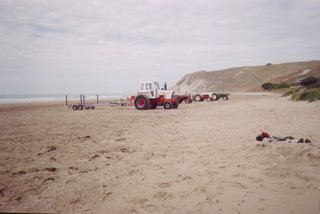 I spent quite a bit of time one day standing in the shallow water, watching little fish swim around my ankles. There were at least three different varieties, but all suffered from the same tendency to get caught by surprise when a wave receded, causing them to suddenly swim like mad back toward the deeper water, occasionally jumping out of the water in their haste. I found this hugely entertaining to watch. At one point, while chasing after the panicked fish, I realized I had gotten the true New Zealand beach holiday experience despite the sub-standard pies and limited ice cream selection. The most essential part of the New Zealand beach holiday is the long stretch of days with nothing much to do except sit on the beach, walk on the beach, or, in my case, stand in the water and watch little fish get surprised by the way receding waves make the water suddenly get shallower. Our trip to Porangahau had been a success.
Posted by Cloud at 9:32 PM