I had planned to go play fiddle tonight, as part of my attempt to find a new normal that includes more of my pre-baby interests. Pumpkin had other ideas, though. She didn't want her final nursing until almost 7:20, which meant that even if I'd left right when she finished, I would have gotten only an hour of fiddle time unless I decided to stay out past my usual bedtime. Some other week, I may have decided to do just that, but I'm pretty tired tonight, due to a particularly wakeful night last night for Pumpkin. She was awake from 3 until almost 5, and I was up with her from 3:30. She nursed a couple of times, but mostly she was just awake, periodically pointing at her bedroom door, trying to convince me to let her go out to play. This is proof of karma, since I apparently did the same thing to my mother when I was Pumpkin's age.

So here I am, writing a blog post instead of playing fiddle tunes. I don't have much to write about. I'll point out that Cara Mama has some very cute stories about her Pumpkin up on her blog today. I'm trying not to be too jealous of the words... we're still limited to "Da!" here, which is applied to anything Pumpkin is curious about. I haven't even heard "Mama" for almost two weeks (although I remain convinced that she really did say it a few times two weeks ago). My Buddy Mimi had a delightful word post last week, too. I'm looking forward to having cute word stories, too, but if I continue to suffer from my baby karma, Pumpkin will soon be talking up a storm but thw words will be incomprehensible until she is almost 4. Maybe we'll get Hubby's karma on this one.

Of course, Pumpkin is still wonderfully cute and a delight to watch. She has recently forsaken her beloved ducks for my plastic measuring cups. This started when I gave her the half cup measure after I made my oatmeal in the morning, in a futile attempt to buy myself a peaceful breakfast. She plays with it for a little while, but quickly wants me to pick her up again. However, on Monday I showed up at day care to find the quarter cup measure in her car seat. I suspect she had refused to give it up when Hubby was getting her ready for day care that morning. She had been pretty much inseparable from that cup for most of Sunday, even crawling around outside with it for awhile. 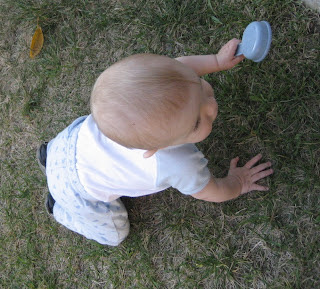 If we were more energetic parents, we'd give her two cups at once, to encourage her nascent walking skills. But we're not 100% convinced we want to do that!
Posted by Cloud at 8:35 PM