I had better finish writing up our Oregon trip before the details fade completely from my memory.... The first two posts, on Mt Hood and the Columbia River Gorge and Salem and Newport were written much closer to the actual trip.

We started and finished our Oregon vacation in Portland. Overall, we were impressed with the city. Of course, we had ridiculously (and unseasonably) nice weather- so we got to enjoy the greenery and plentiful flowers without enduring any of the rain that made it all possible. We started our stay with some family friends who live in the area. We enjoyed lounging on their balcony (with a view of three mountains!) and catching up with them. They took us on a great driving tour of Portland, which gave us a feel for the different neighborhoods and a chance to visit some of Portland's wonderful gardens.

My favorite part about the return visit to Portland at the end of our trip was getting a chance to browse at Powell's bookstore. This was our first touristing stop upon arriving back in the city from Newport. I bought several books, all of which I could probably have found at Borders. But the browsing was a lot of fun. I had to limit my time, though, because I needed to catch back up with Pumpkin and Hubby (who had gone to find a park) so that we could go get dinner.

Dinner was at the Portland branch of the Deschutes Brewpub- recommended by a friendly Dad who Hubby met at the park. Hubby was definitely impressed. We went back the next day for an afternoon snack, after first visiting Cupcake Jones to pick up some cupcakes for Pumpkin's snack. I felt a bit cheated- Hubby had his beer, Pumpkin had her cupcakes, and I had... well, they have a nice lemonade there. 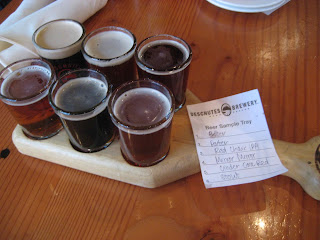 That morning, we had taken Pumpkin to the zoo. It is a nice enough zoo- definitely smaller than our San Diego Zoo, but also a lot cheaper. Pumpkin liked seeing the penguins and otters (we don't have any of those at our zoo). She enjoyed her first trip on a zoo train (another thing noticeably missing from the San Diego Zoo experience)- or at least she has enjoyed telling us about it later, particularly when the song about riding "the choo-choo-choo and the zoo-zoo-zoo" comes on her Noodlebug Animal Friends

DVD. At the time, she seemed more concerned about the little boy sharing the train car with us, who didn't like the noises and "was sad". The only time she got excited on the ride was when we saw the elephants. 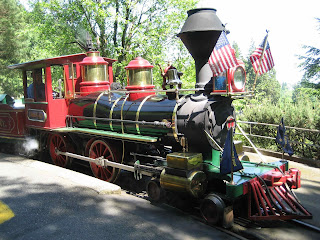 Perhaps the best part of the stay in Portland came after our cupcake and beer snack. We went to the Jamison Water Park, again on the recommendation of the friendly park Dad. The water park is like a big, flat fountain- water comes out from an artificial waterfall like structure, and floods the square. Kids splash about happily. The water drains away periodically, causing the kids to chase it and demand that it come back, which it does. Some of the bigger kids climbed on the big square "boulders" that form the "waterfall". Pumpkin never did that, but she did splash A LOT. She was clearly thrilled to be there, even after a bit of drama where a big girl kept splashing her beyond when she was enjoying it. (I just picked her up and moved her away- I am never sure what to do when an older kid isn't behaving in a way I don't really like. I certainly don't expect Pumpkin to be able to confront an 8 year old. But should I? I didn't.) She got over that quickly, and was in fact more upset when we made her leave. 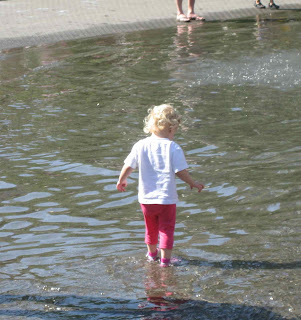 We left Portland the next day, wishing we had just a little more time to explore. Which, really, is the best way to leave a place.
Posted by Cloud at 7:12 PM