I have even more to say about food, but before I do that, I thought I'd take a little break to gush about my children. Yesterday was Pumpkin's 3rd birthday. We've been having an extended celebration. She got her first gift on Sunday, because we wanted her to have time to play with it. My parents bought her a little tricycle. 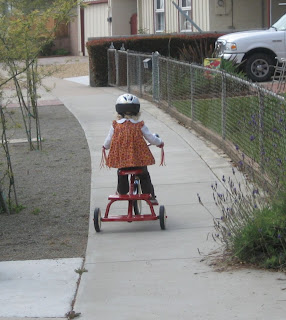 We had her open her gifts from Hubby's parents on Sunday, too, just to space out the gift bonanza a bit. Besides, it was her birthday in New Zealand (they're on the other side of the international date line). And we needed some new books to read at bedtime, and they can always be counted on to send us some fun New Zealand kids books. They did not disappoint.

Pumpkin told us (several times) that she wanted an umbrella and a computer for her birthday. So, her baby sister got her an umbrella, and we got her a computer. 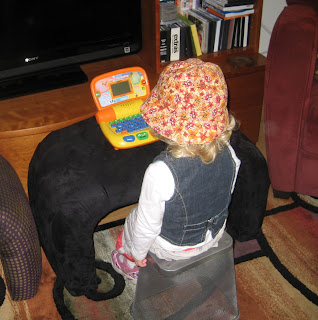 (That is the a little toddler computer

. The screen is a little old-school, but Pumpkin loves the computer. It is going to stretch her skills a bit- the games are little advanced for her. She has already learned how to use the mouse, though, and is getting the hang of a couple of the games.)

We had a family-only party for her last night. My Mom made her cupcakes (yellow cake with yellow frosting, as requested) and hung a "Happy Birthday" banner with dinosaurs- Pumpkin is currently fond of the T rex. Whenever she sees one, she says "that's a T rex!" So the birthday banner was a hit.

We opened the rest of her gifts after dinner. She liked everything she got. Several people gave her money for her college fund. She had a lot of fun putting that in her piggy bank- it is full now. We need to pull some out and deposit it in her actual college fund! She solemnly rolled up the bills to stuff into the piggy bank. Her GiGi and Great-Boppa (my grandparents) sent quarters, which are always a favorite. Unprompted, she decided she wanted to share some with her little sister. Don't be too impressed with her generosity, though- she still got to put them in a piggy bank, which is her favorite part.

My favorite part of the evening came when we sang her happy birthday. She was so happy that it erased any worries or annoyances that were in my mind from the day. I just looked at her big smile and smiled, too.

Pumpkin's day care party was delayed to today, due to a miscommunication between Hubby and the teacher who was in the room when he dropped her off yesterday. She was sad when she realized the party hadn't happened yesterday (we'd taken some cookies and party hats in), but was easily mollified with a promise of a party today- and today, she was bouncing around telling me about eating cookies when I got to day care to pick her up. So I think the adults all felt worse about the mix-up than she did.

Her final birthday party is Saturday, when we're hosting a bunch of her friends at an indoor playground. (The idea that it is easier to have a birthday party at the park and that it is silly to hire a place like this for a party is one of those little misconceptions I had before I had kids- this is actually FAR easier.) I am making a cake for that party. I have been instructed to make a chocolate cake with chocolate icing, with a fishy on top.

Petunia's half-birthday was last Friday. She didn't get a party- she got a trip to the doctor's office for her 6 month check up. She is about average height (25.5 inches, 43 %), a bit chubby (18.2 lbs, 88 %), and has a gigantic head (18 inches, 99 %). The doctor checked a few milestones- the fact that she's rolled over was duly noted, even if she's done it exactly one time. She uses both hands to grab at items, which is good (it means the two sides of her brain are talking). And just recently, she's gotten really into sitting up. She even likes to sit upright in her bouncy chair, which has got to be an awesome abs workout. She sat like this for about 20 minutes after we got home today, while I cooked dinner. 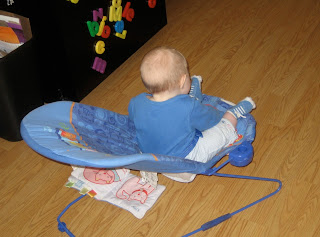