A Quick Update Because I Know My Parents are Worrying, Too

Petunia's doctor could find nothing wrong with her, except for a slightly runny nose. So we're going with the hypothesis that this is a standard day care illness, that she just reacts to most illnesses by getting a high fever, and that it is nothing to worry about. If her fever isn't gone by Wednesday or if she gets sick again next weekend, we're probably going to go see an ear, nose, and throat specialist.

Pumpkin reported playing with her friend "E" and a little boy "A". She and "A" apparently dug in the sand with one of the littler kids, and "threw sand up in the air". That last bit is usually a big no-no at the school, so I'm guessing it was more vigorous digging than actual launching of sand into the air. But who knows. Hubby says it was a really rough drop off, though, because only "B" and another little girl were there. Pumpkin didn't want to let go of Daddy, and one of the teachers had to come hold her for awhile so he could leave. So a mixed day. No word yet from the managing director. If she doesn't answer my email tomorrow, I guess I'll just have to call. They had the Lions in today doing vision testing, so she was probably pretty swamped. (Pumpkin's vision is excellent, in case you're curious.)

Pumpkin was in a pretty good mood tonight, as was Petunia, so I'm off to bed feeling a little less worried. I'll share one last thing: 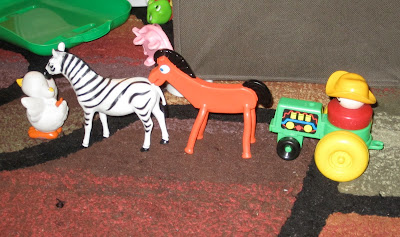 That is Santa in his sleigh, being pulled by his reindeer.
Posted by Cloud at 10:12 PM