In the summer of 2003, Hubby and I took a trip to England and Wales. This was back before we had kids, so we managed a full three week vacation, but still only scratched the surface of the things we wanted to see. Some day, maybe, we'll get to go back- but then again, I have yet to see France at all, and only stopped over in Germany on my way to Spain (that's a long story). And I've always wanted to see Scotland, and have heard that Holland is nice....

We knew that we wouldn't be able to really "do" London- we had a little less than a week there. Still, one of my favorite things to do when visiting a city is to walk some neighborhoods, so I was determined to spend one of our precious days just exploring. We had a guidebook with several different walking tours, and we picked one out and went on the tour one morning. I think we picked that particular tour because it included both a church designed by Sir Christopher Wren (the Church of St. Stephen Wallbrook, which was indeed beautiful) and a half-timbered house originally built in 1595 (the Gatehouse of St. Bartholomew the Great, which had to be restored in 1916 due to damage from a zeppelin bomb). I still love the image of the half-timbered house squashed in between more recent buildings: 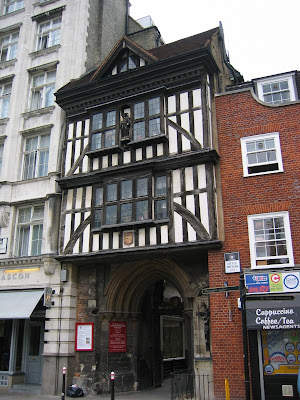 But the highlight of the tour turned out to be a park included primarily as a resting point. The park included a statue that is a tribute to John Heminge and Henry Condell: 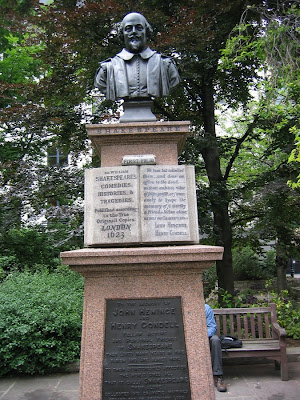 They were actors and friends of Shakespeare who saved his work for posterity. They collected all of his known plays and got them published. I was struck by this statue, and the idea that without these two men- whom I had never heard of before that day- we would not know some of the greatest plays ever written.

Between the lay off and the life reorg I was working on before the lay off, I've been thinking a lot about what it means to be "successful". Then the Tiger Mom thing blew up all over the internet, and I was struck by what a narrow view of success some people have. And I remembered that statue and those two men.

I have written before about how I define a successful life- it is about happiness more than money or fame. But I also believe that we should all try to make this world a little better for having had us here. Too often, we think that the only way to achieve this is to do something big and splashy that makes future generations remember our names. But that statue in the park reminds us that there are other ways to make a difference, and that even people whose names disappear into obscurity can have a profound impact on the lives of future generations.

If you think about it this way, the possibilities for having a successful life multiply. In fact, we may not even know what act in our life will have the most impact on the future. I wonder if Heminge and Condell gathered Shakespeare's works and published them because they thought they were important works of literature that needed to be saved for future generations? Or because they thought they could make some money by publishing them? Someone out there has probably researched that question and knows the answer, but I don't think it really matters- regardless of their motivation, the world is better off for having had them in it.

The lesson I take from that statue in the park is that the actors in the limelight in life may not be the ones remembered by history, and that what I think of as my life's work may not be my biggest contribution at all. Very few of us will get the chance to do something that will make future generations know our name, and even fewer will know at the time that their actions will be remembered. Did Shakespeare himself suspect that his plays would still be relevant so many centuries after they were written? I certainly won't be writing any great literature. I may or may not contribute something truly lasting to the advancement of science. Perhaps something I do outside work will have an impact- but maybe not. I hope to raise kids who will themselves go on to make the world a little bit better, but there are no guarantees. All I can do is try to use my skills on projects that seem worthwhile, and try to spread a little happiness in the world. And if I can do that, I will count myself as successful, even though the schoolchildren of the future will never learn my name.
Posted by Cloud at 10:16 PM