Princesses Are Not The Problem

I shouldn't really be writing a post tonight. I should be working on getting ready for Christmas. But I had a rough day. First, I wasted half of the day tracking down a bug in a data loading script that turned out to be a "feature" of the vendor-supplied database into which we were loading- a feature that the vendor damn well should have told me about when they suggested I load my data in this particular way. Then my day ended with a contentious meeting that ran 30 minutes late and made me late to pick up the girls at day care, which made me late to get home, which made me have to change my dinner plans. Then both girls had spectacular meltdowns around bath time- Petunia because she wanted to wear her (cloth, not water safe) butterfly wings in the bath and Pumpkin because she didn't want to take a bath for some reason.

So anyway, I'm thinking that maybe ranting some more about toys will be therapeutic. Or maybe not- but these thoughts have been bouncing around in my head and they are distracting me from the things I should be doing, so maybe by writing them down and asking you all what you think I can get on with finishing my #&%$! project at work and getting organized for Christmas at home. As usual with this sort of post, I make no guarantees for a coherent argument. This is a dump of my thoughts on the topic, and I am very interested to read what you think in the comments.

I continue to see reactions to the new "girl" Lego sets I wrote about in my last weekend reading post, and so I continue to think about them. I may not have made this clear in my last post, but I am not exactly thrilled by the idea of gender specific Lego sets. However, I think that the decision to have gender specific sets was made several years ago, when Lego decided to start making a lot of battle-themed sets. Now, I didn't have kids then, so maybe there was an outcry similar to what we're seeing now about the "girl" sets, but I doubt it- which I think is interesting, and says a lot about our culture.

I also think it is worth remembering that Lego started bringing out those "aggressively boy" sets not because they are an evil company intent on reinforcing gender stereotypes, but because they were fighting to survive, and those sets were part of the strategy that brought them back to profitability.

I think that sometimes we forget that toys are mostly made by companies, which exist to make money. They sell us what we will buy. Toys are an interesting consumer item, though, because they are simultaneously a mirror for our culture, showing us through our children's eyes what we are, and a tool by which our culture indoctrinates its newest members.

The frustrating thing about cultural norms is that they are incredibly pervasive and hard to avoid. You would never know it from looking at the amount of Disney Princess crap we now own, but those Princesses were not invited into our lives by me or my husband- or any other adult, really. They came in because of day care. Specifically, because of what the other little girls at day care were talking about. Pumpkin knew all the stories from her friends, and she wanted Princess underwear and Princess bandaids because those are what her friends had. She could show the other little girls her Princess bandaid and they would be impressed, in their three year old way. I didn't really see the point of having a huge fight over bandaids- or underwear, for that matter- and so the Princesses came into our house.

Eventually, I felt bad that Pumpkin seemed so left out of the mainstream of her day care culture, and we decided to get a Disney Princess movie for her to watch. We settled on Cinderella, because it is the least scary- and she is still a child who would prefer her entertainment to be largely free of any tension. We had to talk her through the scene in which Cinderella gets locked in the tower, but once she made it through, she loved that movie, and we made peace with it.

And now Petunia asks for "Rella" and knows the names of the main mice in the movie. This is not something I ever expected to have happen in my household.

Given all of that, I certainly don't expect parents to fight the cultural norms all on their own. I think it is reasonable to ask for some help from the rest of society. In fact, if I were making the rules, I would require that every ad for a toy show an equal number of boys and girls. There would be girls in the ads for the latest battle toy and boys in the ads for that Barbie head that you use to practice doing hair and putting on makeup. And the toy packaging would have to do the same.

But I'm not making the rules, so I have to navigate the current environment as best as I can. It would be easy to despair, but I think that would be both wrong and defeatist. Our culture is pervasive, but I, as a parent, have a huge role to play in helping my daughters learn how to navigate it. To that end, I try to remember that my end goal is not to raise daughters who hate princesses, but to raise daughters who have the skills and confidence to pursue their interests, whatever they may be.

I will not tell my daughters not to like the Disney Princesses, but I also will not roll over and let Disney tell them what it means to be a princess (or, for that matter, a girl) and I will not let their interest in princesses and other "girl" things deprive them of the chance to play with toys that help them build all their skills.

I will confront the stereotypes, by doing things like reading them The Paper Bag Princess 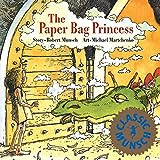 And I can subvert the stereotypes, by finding toys that fit their interests and stretch their skills. This isn't as easy as I want it to be- but it also isn't as impossible as some people make out. We adopted a family for Christmas this year, and one of the kids was a six year old girl. She asked for a "flying unicorn toy." As I expected, My Little Pony makes one of those. I was pleasantly surprised, though, to find that they also make a radio-controlled car (which is another great toy for stretching spatial reasoning).

I think it is a stroke of genius that the radio controller looks a bit like a magic wand, which is another thing that princess-obsessed girls love. The store I was at had a two-for-one sale on My Little Pony toys, so the little girl got the car as well as the (to my eyes) less interesting flying unicorn toy.

I love the look of the Castle Logix

set, and will probably get that for Pumpkin or Petunia eventually.

(Thanks to FeMOMhist for bringing it to my attention.)

And yes, I may well buy Pumpkin a "girl" Lego set when they come out- it will depend on what the set actually looks like.

If I have to work a little harder than I'd like to find toys that stretch my girls' spatial reasoning and math skills- well, I think it is worth it. And I think that I can I do that with the imperfect toys available today, even while I also speak out to try to change our cultural expectations about what boys and girls like and are good at. In fact, I think that I owe it to my girls to do both of those things. They can't wait for our culture to change, but wouldn't it be great if they don't have to work so hard at this when they have kids of their own?
Posted by Cloud at 10:07 PM