Anandi had a post up today about her "vacation limit"-  which got me thinking about our "big trip," when my husband and I took four month sabbaticals from our jobs, bought a "Circle Pacific" airfare, and backpacked (in fairly luxurious style, for backpackers) around the pacific and Asia. It was a great trip, one of the highlights of my life. As I said in my comment on her blog, I was ready for some easier traveling (and familiar food) at the end of our Asia leg, but I was really sad to get on the final flight home from Honolulu. So I guess my vacation limit is longer than four months.

I came home from work and dug out the journals I kept on that trip, and read a few entries, including the ones about our stay in Taman Negara, in Malaysia. We were coming off of a few days in Kuala Lumpur, which we enjoyed, but found a bit difficult, mainly because we stubbornly refused to move when we discovered that the hostel we'd booked into sucked. Its air conditioning was out, I kept waking up with new bug bites on my legs, and there was a car alarm going off outside our window literally the entire time we stayed there. I have no idea why we didn't move. We could easily have afforded a better guest house, and we walked past several on our way to do just about anything. I think we just kept convincing ourselves that the air conditioning would be fixed when we got back to the hostel, and that surely that damn car's battery would die soon.

Anyway, we loved Taman Negara, starting from the boat ride you take to get there. (You could, in fact, go via bus, because that is how we left, but the boat ride is much, much more fun.) You ride in a low, long boat, sitting on wooden seats that are essentially in the bottom of the boat, so you feel like you are practically in the river. 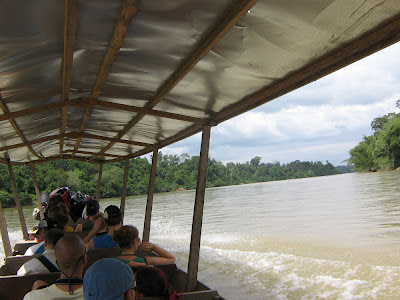 It is a leisurely ride, giving you a chance to enjoy the scenery and even catch site of some animals.
Still, we were quite ready to get out of the boat at the end- the seats were getting rather uncomfortable after 2.5 hours. We had to cross a rickety gangplank to get from the boat to the shore, an then hike up a small hill to our lodging. I was pretty fit by this point, and had no trouble, despite my big pack. I doubt I'd do so well now. 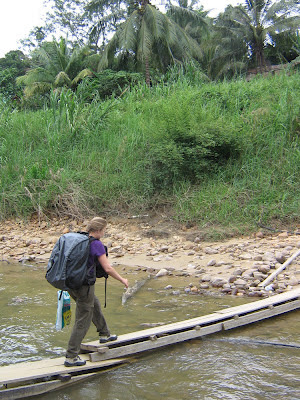 The motel we'd booked into was basic, but comfortable and we were thrilled with it. It had an awesome hammock with a view of the river, and every afternoon, the owner fried up bananas and sold them for a ridiculously low price given how delicious they were.

We did not try to do a night hike out to a hide to see the big animals- we had heard that it was likely that the only wildlife we would see would be rats attracted by the food that careless people left around the hides. But we did go on a "night safari" in a 4x4 truck, which gave us the chance to see some of the smaller animals that are no doubt boringly common to the locals, but seemed exotic and cool to us, like a loris. I imagine it is like going to Colorado and taking a tour out to see some raccoons, but we still had fun.

We also really enjoyed the canopy walk. We were too tired from our poor sleep in Kuala Lumpur to get up super early and do this hike when there was a better chance of seeing the birds and other animals of the park, but even with a late start, the walk was amazing, affording beautiful views. 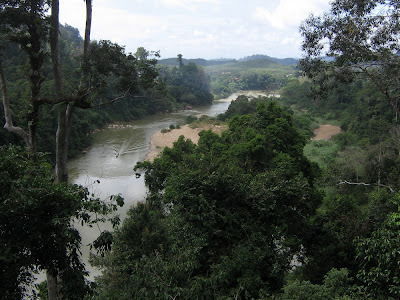 You climb up a ladder and then you can explore the tree tops, via a walkway that is suspended from the trees. It is supported by iron cables secured to large trees (with spacer blocks in place to minimize damage to the trees). A net-like thing is hung from the cables, and a metal ladder lays flat at the bottom of the net. Wooden planks lay on top of the ladder to make the walkway. It feels both secure and adventurous- perfect for tourists. 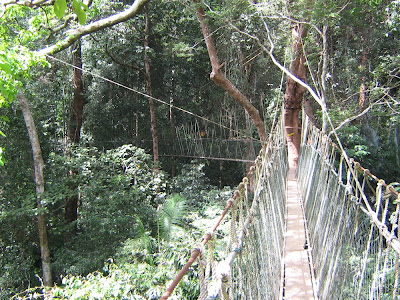 We ate dinner both nights in one of the restaurants floating on the river. The food was good, and the view was better. There was no alcohol available- Taman Negara is in one of the Muslim areas of Malaysia. But I really enjoyed the ginger "tea" that I drank instead- it was made by pouring hot water over minced ginger, and then adding sweetened condensed milk. At the time, I was sure I'd try to make it when I got home. I never have.

My favorite thing about our stay in Taman Negara, though, was the swim we took on the second afternoon. We had gone on a moderately strenuous hike in the morning, so felt we had earned some time lounging around. There is a spot on the Tahan river, approximately 1 km from the resort, which the locals and some tourists use for swimming. There were locals swimming when we got there, so I did not strip down to my swimsuit- I only zipped off the legs on my hiking pants to make shorts, and even that felt a little risque. But it felt wonderful to be in the water, which was cool and clear. 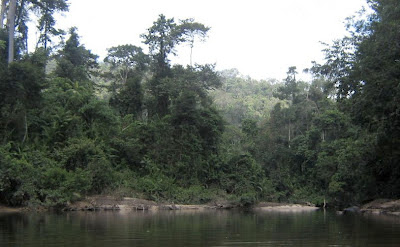 The swimming spot is at a gentle curve in the river, which meant that we looked back over the river to a bank lined with lush trees while we soaked. It was one of those travel moments that feels almost too perfect to be true- and it lasted for over an hour. Then we got out, dripped off a bit, put our boots (and my pants legs) back on, and headed back to our motel.

That trip was not all good times. Sometimes, travel is difficult and annoying, and traveling with a big pack on your back through countries whose customs you understand only from your guidebook and whose language you understand not at all can be tiring, to say the least. But there were enough experiences like that swim to more than compensate for all of the indignities of travel. My husband and I both came back from that trip convinced that eventually, we'll find a way to do something similar again.
Posted by Cloud at 10:11 PM