I have a couple of serious posts half-written in my drafts folder, but I feel like writing something happier today. So I'm going to give you a progress report on how we're all doing with the transition to Kindergarten. The short version is: we're doing well.

Everyone was excited on the first day of school last week. Pumpkin could hardly wait to put her backpack on and head out to school. She insisted I take this picture, showing her backpack:
Petunia was excited, too, and insisted on putting on her "pa-pack" and walking along with Pumpkin- she didn't want to get in the stroller for over a block.

We deposited Pumpkin in her spot in line on the playground. I hung out next to her for awhile, and watched as she met the two girls on either side of her in the line. Then I gave her a big hug and retreated to the sidelines to watch the scene and blink back tears until it was time for the kids to go into their classrooms. 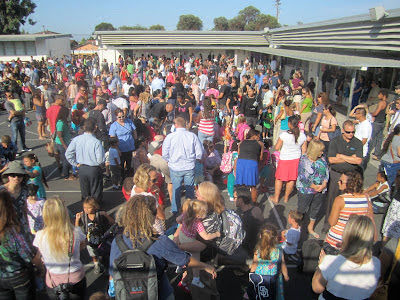 I left work early that day, excited to go hear about Pumpkin's day. She had done great. She didn't seem too concerned by the fact that she couldn't understand everything the teacher said. For the most part, that has continued, although Sunday night during bath she said she wished she went to a school where the teacher spoke English. We talked a bit about why we're going to this school, and she moved on to other subjects. Yesterday, she was excited to go to school, just like usual.

She brought home her first stack of worked papers yesterday, and she is doing well with the writing practice, coloring, and basic numbers work- which isn't surprising, because she knows her numbers well and likes to write and color. There are several papers with Spanish words on them, which we'll practice at home, both to help her and because we want to learn Spanish along with her as much as we can. I've also put "listen and learn" Spanish CDs in both cars, and now spend my morning commutes repeating Spanish words rather than listening to news or music. I spend my afternoon commutes listening to whatever music Petunia picks out.

Petunia has had no problem adjusting to going to day care without Pumpkin. She got a new teacher at about the same time as Pumpkin started school. The previous teacher in her room had left to go care for her elderly mother. Petunia has really taken to her new teacher, who has lots of interesting new activities for the kids. I am more determined than ever that we should keep Petunia in this day care, even when my company moves to new offices in a less convenient location. I have a lot of thinking to do about how we'll make that happen and how I'll respond to the upcoming office move, but the move is at least a year away, so I can postpone that for now.

Mr. Snarky and I are probably the ones struggling the most with the transition. The school's schedules things at mildly inappropriate times- a back to school picnic by the bay started at 4:30. We left work early and got there at 5:30. The open house night, which will be our only chance to talk to Pumpkin's teacher in English*, starts at 5:30, which will also require leaving work a little early. Having talked to our coworkers with older kids, though, we feel fortunate- a lot of schools start things like this at wildly inappropriate times for working families.

We're slowly finding new routines. It turns out that picking just Petunia up from day care is much faster than picking both girls up was. I haven't really been able to pinpoint why, but the net result is that I think I can still get home in time to make dinner at the usual time, even with the double pick up. The double drop off is harder, and the morning commute for the parent doing drop off now takes at least 45 minutes, sometimes an hour. Mr. Snarky is getting up 15 minutes earlier, and we're all working hard to get him out the door by 7:45, so that he can be in his office for his 8:45 morning meeting. I am trying not to schedule anything before 9:30 on Thursdays, which is the day I have to do drop off.

The hardest thing, though, has been absorbing the extra chores into our evenings. The paperwork from school will stop soon, I hope. But I'm now packing a lunch and snack for Pumpkin everyday. I do as much as I can during evening snack the night before, and then make the sandwich in the morning. Pumpkin likes butter, strawberry jam, and gouda cheese in a pita pocket, and that doesn't really keep well overnight in the fridge. It took quite a bit of effort this summer to find a combination that was acceptable to her, though, so mostly I'm just happy that I have a reasonably healthy lunch I can pack for her. I've signed up for the system that lets her buy lunches some days, but so far, she hasn't wanted to try it.

So all in all, the transition is going well. Pumpkin is happy at her new school and learning Spanish. Petunia is still happy at day care, even without her big sister there. Mr. Snarky and I are figuring out the new routines, and hanging in OK.

And now I had better go get started on that new morning routine. How has back to school gone for you?

*All the teachers are fully bilingual, but the K-2 teachers do not speak English in front of the kids- this helps with the immersion program.
Posted by Cloud at 6:44 AM