Parenting is sort of kicking my butt these days- we are definitely muddling through. I am always tempted to let these rough times go unremarked- why dwell on the hard times?-  but occasionally one of the kids will do something that I want to remember and I'll feel compelled to write a post about it.

This was a good weekend, but a trying one. Petunia got to bring the class stuffed animal Pete, a penguin roughly 2/3 the size of Petunia, home from day care. She was very excited to have Pete with us. Unfortunately, so was Pumpkin, who almost immediately started to whine about how she never got a chance to play with Pete. This wasn't really unexpected, but it was fairly annoying and resulted in a few timeouts and a few dramatic flounces down the hall, complete with slammed bedroom door. 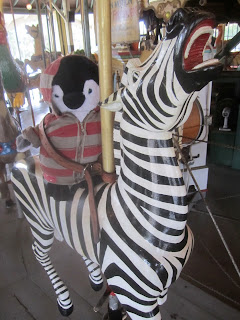 We still had fun with Pete- we took him to a merry-go-round and Mr. Snarky strapped him onto his very own horse, much to Petunia's delight. She insisted that both she and Pete should ride on horses that went up and down, so Mr. Snarky had to stand there and ensure Pete held his seat. It was pretty amusing, really.

But by this evening, I was tired. I was tired of refereeing disagreements between the girls. I was tired of explaining things to the girls- they are both in explanation-intense phases, I guess, and both Petunia's incessant asking of "why?" and Pumpkin's less frequent, but more complicated questions sap my energy. I was tired of paying attention to Petunia's potty needs and cleaning up potty accidents- we've decided to get serious about potty training, which may be my least favorite parenting task, and one that I readily admit we suck at. (On the plus side- this is the last time we'll have to do it!) And I was annoyed that we had managed to get through a rather impressive list of household chores, but that I when I'd finally gotten the chance to sit down at my computer to do the work I needed to complete this weekend I had been interrupted in 15 minutes. To be fair, Mr. Snarky had tried to take Pete and the girls out for a walk with our wagon, but it had started raining and they'd had to come home. That extenuating circumstance is completely irrelevant to the state of my bug database, though.

After bath, I was trying to get the girls dressed and on to snack- I was definitely in the "just plow through until we're through bedtime" mindset and not in a playful, "let's make this all a game" mindset. And Pumpkin just would not cooperate. She was bouncing around on the sofa half-dressed, giggling and cavorting and not listening. I snapped and gave her an ultimatum, which she ignored, and then Mr. Snarky marched her down the hall to her bedroom, wailing. Petunia started crying, too. Neither girl likes to see the other upset, unless, of course, the reason for the upset is that one is being punished for an infraction against the other, in which case the observing child tends to think that the wailing is just the natural course of justice. In this case, Pumpkin's shenanigans had not disturbed Petunia, so she added her protest to her sister's.

I finished getting Petunia into her PJs, and then I went after Pumpkin. She was contrite, and gave me a long hug. I've been trying to give her more of those, since I know that kindergarten is harder than she expected it to be, and the hugs seem to help. I told her I was tired, and we just needed to go have snack and get to bed. She agreed and said "I don't know why, Mommy. I'm so tired, too. I don't know why my body made me bounce around like that."

How could I not smile?

So then I told her that was OK, but that I'd tried to tell her that I was getting mad, and she didn't seem to hear me.

"Oh, I heard you Mommy. I just wasn't listening."

But it cleared the mood, and we went out and had snack, and then headed to bed, all in a good mood. Until, that is, Petunia insisted I come in and finish getting her down. It was Mr. Snarky's turn, but I am often the required "closer" these days. Luckily for Petunia, I remember when Pumpkin was about the same age, and I was also the required closer for her bedtimes. This may have been what eventually led me to break Pumpkin of the habit of needing company to fall asleep. I suspect a similar fate is in store for Petunia soon. I'm debating whether or not to wait until potty training is further along. Regardless, tonight I just went in and snuggled her, and tried to appreciate the quiet time and the chance to snuggle.

And now I'm off to bed, roughly 30 minutes later than I should be. But I feel better for having written this. Perhaps I should take the time to capture the tough days more often!
Posted by Cloud at 10:59 PM