In my last post, I started to write the trip story for our time in Auckland on our recent New Zealand vacation. I only covered the first two days in that post, and we were in Auckland for four days. Here's the rest of the story:

Our third day in Auckland was sunny and a little warmer- which was lucky, since we'd planned to take the ferry across to Devonport. We thought the kids might enjoy the boat ride, and we were right- although there was some disagreement about whether we should sit inside or outside. (In the end, we split up.)

Once in Devonport, we did a little shopping- there was a toy store, and we needed to get some toys to entertain the kids in hotel rooms. We usually buy a new toy or two on vacation, because we find that this keeps the kids happier, and the toys make somewhat useful souvenirs (as opposed the the pack of 10 cheap souvenir keychains Petunia picked out at the Sky Tower... I have no idea what she intended to do with them, but she was adamant that they were what she wanted, and we had said they could each pick something.) Mr. Snarky and the girls checked out the local playground, too, while I did a little shopping without distraction. It was a good one, and the kids had a lot of fun.

I didn't buy much shopping on my own, but ended up going into a shop on our way to lunch, with kids and Mr. Snarky in tow, and bought a dress from a New Zealand designer that is probably more expensive than any other piece of clothing I have ever bought, except my wedding dress- but I love it and can't wait to wear it on our next date night. Or, if I get the right shoes at some point, I could even wear it to work, which would surprise my colleagues used to seeing me in casual pants and t-shirts! (Here's the dress, if you're curious.)

After a so-so lunch whose highlight was the fact that Petunia briefly liked pies- she was all smiles eating her mince pie until she got to the mince- we headed back to our hotel for a rest. After nap and rest time, we went to the Lumsden Free House for afternoon snack and drinks with some good friends of ours and their two kids. The kids loved running around the grassy area and fountain in front of the pub, and Mr. Snarky loved the generous tasting flight of local beers. 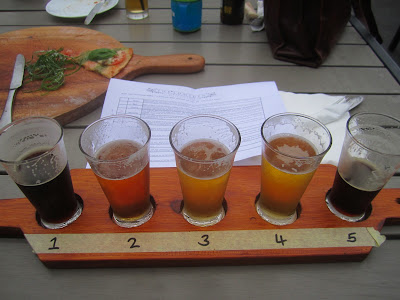 It was so generous that I had to drive the next leg of our outing, which was to our friends' place for dinner.

The next day, I got to pick what we did, and I gambled on doing what I actually wanted to do- which was stroll down Queen Street. When Mr. Snarky and I were first getting together, I flew to New Zealand to see if the relationship would work out. I stayed in a hotel at the top of Queen Street, and Queen Street was the first part of New Zealand I felt I sort of knew. When I came back to work for a month (Mr. Snarky and I met through work, and that is all of that story I'm telling here), I stayed just a little bit away from Queen Street, and again spent a fair amount of time in its shops. So I have a lot of fond memories of strolling that street, and wanted to do it again.

Unfortunately, my plan of starting with a nice morning snack in the Robert Harris on Queen Street enjoying the second story view out over the street was ruined by the fact that it appears to be gone. We had to find another place for snack, and that took a little too long. And then Pumpkin ate nothing but sugar (a rather yummy cookie), and that set her up for a meltdown later.

But the day was not a complete wash. We ended up walking up to Albert Park, another location of which I have fond memories. An Island dance troupe practicing in the park, and we enjoyed watching that for awhile. Petunia was even inspired to put on a dance show of her own, which was unbelievably cute. She also collected a bouquet of leaves, as she is wont to do, and carried that around for the rest of the outing, much to the amusement of many passers-by. Pumpkin liked the park until Mr. Snarky didn't want to walk back to the far end of the park after we'd started to leave so that we could get a particular picture she wanted to take... and then the meltdown occurred. In retrospect, we should have gone and taken the picture she wanted- there was no real reason not to other than laziness and the fact that we'd already started to leave. She didn't get to dictate much on the trip, and we should have let her dictate this. But we didn't, and so she was pretty angry with us for awhile.

We'd walked up to the park past the Auckland Art Gallery, and through the windows, had glimpsed the gigantic flower chandelier/installation currently on display. Pumpkin had seemed excited by it, so we headed there, hoping for a recovery from the meltdown. That was not to be, but the rest of us enjoyed looking at the chandelier, which is a piece by Choi Jeong Hwa.

Pumpkin secretly enjoyed it, too. We know this because she was quite animated when she later told her grandparents how it moved. But at the time, she pouted, which, I suppose, was an improvement over the loud crying we had in the park.

We tried to rescue things by getting the kids a familiar lunch. Auckland now has a Carls Jr, right on Queen St. That helped... and I realized that we needed to carry healthy snacks with us at all times. Pumpkin is not an adventurous eater at home- it was probably a bit much to expect her to happily try new things on the trip, even if those new things were very similar to things she likes at home. So from then on, I kept snacks we knew she'd eat in my purse, and that helped keep outings fun.

(Pumpkin and I had a talk about this incident the next day, when we were discussing what snacks to buy for my purse, and she was quite surprised to discover that I have had my share of meltdowns while traveling, too, and that the root causes were usually pretty similar- I was hungry or tired or feeling just a little too far out of my comfort zone. I had a spectacular meltdown at that botanic gardens in Penang that still makes me a bit embarrassed to think about!)

We did a little bit of shopping after lunch, as we walked down Queen Street towards our hotel. Then we had a short rest- but not a nap- before loading everyone into the car for a "nap drive" around Titirangi and out to Kumeu, where another good friend of ours has bought a house. His house came with some cows, which Pumpkin enjoyed visiting. Unfortunately, it had gotten quite a bit colder, and Petunia found it a bit too cold to walk out to see the cows and the horses that they also own, so only saw a hedgehog. She thought the hedgehog was pretty cool, though, and made me run and get Pumpkin to see it, too.
We had a nice visit and dinner with our friends, and then drove back to our hotel, reasonably happy with how our first stop on the trip had gone. We got up the next morning, packed up, and headed out for Taupo... and I'll pick up the trip story there some other time.
Posted by Cloud at 10:18 PM