I've got a new Ask Cloud question from an anonymous reader we'll call "Moving to CA."

I'm moving to an urban area in California.  I don't have access to any information about school districts other than the official information online.  I also know that there's a lottery in March and the "best" schools (and in-school programs) in each district fill up and get wait-lists at that point, and that living across the street from a district school in no way guarantees being able to go to that school... even though there's no busing.  (This is all really bizarre to me.)  On top of that, the district boundaries seem to have nothing to do with say, town boundaries.  In fact, it looks like there are a lot of bizarrely cut up districts with all Great-school "9s" and "10s" in their district and some with only "2s" and "5s".

We are trying to figure out where to live.  We're moving well after the March lottery date and will probably end up at a local school that doesn't have a waitlist, preferably one in walking distance to wherever we end up.

I've heard you say many times that your school is great even though it's known as "rough."  My question for you:  Is the school rated on Great Schools more in the "2" range or more in the "7" range?  I notice that there are some districts where the "7s" are much more ethnically and racially diverse (minority-majority districts) than the 9s and 10s, and I wonder if that's the kind of school that's considered scary and rough by people with implicit biases.  Essentially, I'm wondering if we should avoid the "2" schools at all costs (thus avoiding an entire district if it has a "2") or if they're likely ok too.

This is a tough one. I don't know much about how Great Schools does its rankings. I looked up our school and it is an "8." I also skimmed their rating methodology, and it looks like in California it is almost exclusively on test scores, which are of course an incomplete metric at best. I think you'd be better off looking at the data directly from the state, particularly if you are inclined to do your own analysis. Up until 2013, the state testing here was called STAR. Now it is the much less catchy CAASPP. Bad Mom Good Mom, whose child attends public school in the LA area, has some really good posts about interpreting the test results:
I don't have the patience to dig through the testing data as carefully as she does, but I also had the luxury of having the time to do onsite school visits, which you do not. Even if you don't want to crunch the numbers yourself, you should be able to get access to more data than the single rating Great Schools uses. For instance, you can get the Performance Level Reports for the various tested subjects, which shows you the breakdown of the scores. Here is a screenshot of the Math Performance Level Report for our school: 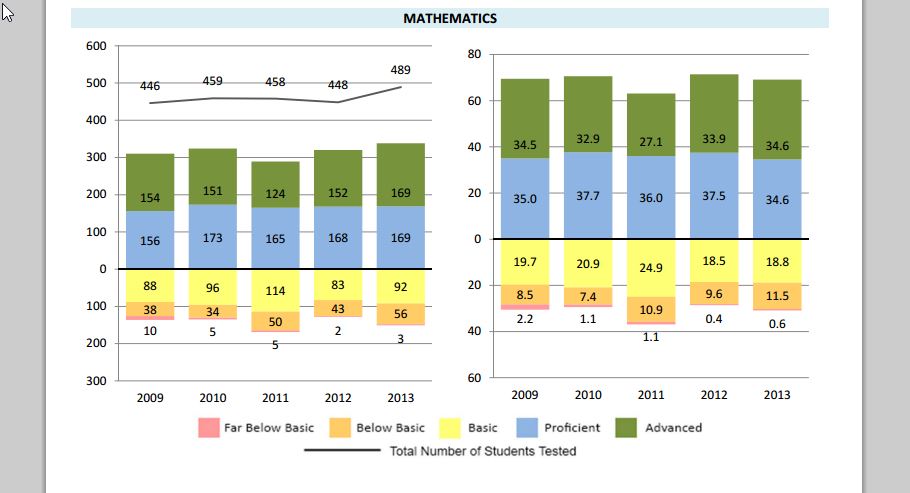 You should also be able to get the School Accountability Reports. These are required for all public California schools (I think). According to my district's website, these reports cover:
Another option to keep in mind are charter schools. Charter schools in California don't tend to be the big corporate charter chains that are common in some other states. I don't know why. You can get information about charter schools in California from the state education department. For your purposes, it is important to know that the lotteries for admission into charter schools are separate from the lotteries for placement in magnet schools (district run schools that pull students from a distributed area) or for school choice (wherein parents can try to "choice in" to a school that is not their neighborhood school).

The Los Angeles Times has a schools site, which might be a convenient way to get a short list of schools to research further.

I wonder if you could get email answers to some questions from a short list of potential schools. You should be able to find out about GATE (Gifted and Talented) programs, for instance- different districts and even different schools within a district approach GATE instruction differently. We had no luck getting useful info about GATE programs when we were researching kindergartens, but that is because at that point no one knows which kids are likely to be considered GATE, and the school officials tend to assume that parents have an over-inflated opinion of their kids' genius. If your child is past the 2nd grade, though, you should be able to get them to take you seriously and answer questions. GATE programs start in 3rd grade here.

Another question that might be informative is to ask about music programs and other non-essential enrichment activities. The presence of these indicates resources and time to spend on things other than just the basics. I'd also ask about the PTA and any donation expectations. I've mentioned before that some of my friends at wealthier schools have rather high "recommended donations." I recently heard of one school at which the people who did not make the recommended donation were publicly named. That sort of thing would make me furious, particularly if the kids heard about it. There are also some charter schools I know of for which the parents are required to donate a certain amount of time. That would also not work well for me.

I'd also check vaccination rates. I just saw that we're about to have another measles outbreak here in Southern California. That makes me angry, but I'm not particularly worried about my kids this time, because they are vaccinated and they are at schools with relatively high rates of vaccinated kids. There's an "alternative" school here in which something like 50% of the kindergartners are not vaccinated. THAT would worry me.

That's all I have. Readers, how would you evaluate schools from a distance? I'd be particularly interested to hear from readers in other urban areas of California. "Moving to CA" didn't indicate which urban area is of most interest, and I can obviously only speak from knowledge about San Diego.
Posted by Cloud at 7:27 PM