I have several unrelated things I want to share, and rather than try to force a connection, this is going to be a post in parts.

Part 1. There is a new Tungsten Hippo taster flight post.

Over the weekend, I posted a taster flight of short ebooks that are mashups of science fiction or fantasy and detective stories. I really like this subgenre, and should look for more stories in it.

Part 2. I have questions.

I have some questions for you guys.

(1) Do I know anyone who studies frogs? Or just knows a lot about them? Bonus points if you have kids (or otherwise read a lot of picture books). I have a children's book story about a girl who loves frogs that is almost ready for beta readers, and I'd like to have at least one of them be someone who knows a lot about frogs.

Other beta readers are welcome to volunteer, too. I'm not sure when I'll get the story to you- maybe within the next month. It is really close to ready, but I am really busy right now...

(2) Do I know anyone who is an illustrator or knows an illustrator? I have a business idea (no, not publishing children's books) and I don't want to pursue it unless I can convince myself it is economically feasible, and that involves talking to an illustrator about rates, compensation options, and the like. Any help finding someone to talk to would be much appreciated!

I've picked the winners for my mailing list promo, so if you haven't gotten an email from me by now, you didn't win. I'm still waiting for one of the winners to reply with an address, though, so I guess there is a still a slim chance...

Thank you to all who helped spread the word. I've decided that reaching certain mailing list milestones will trigger a celebratory walk on the beach. I didn't hit any with this promo, but I got a heck of a lot closer, so I'm happy.

Part 4. Parenting is hard, but the beach is awesome

Now that my kids are older, I'm on a quest to recapture a little bit more of our old spontaneity. After the success of the late afternoon walk on the beach a few weeks ago, I got in my head that we should be able to do an actual late afternoon trip to the beach, with swimming and everything.

It was super hot (for San Diego, so high 80s) on Saturday, so we decided to give it a try. It went pretty well, but there are still a lot of kinks to work out. We stayed in the water a little too long, and Pumpkin and I got hangry. I'd forseen this, and had brought a bag of chips. That sorted me out quickly, but Pumpkin was a little bit past rationality and was freaking out about sand getting in her mouth. Eventually, we found a way to get a few sand-free chips in her, and she calmed down and started eating them on her own.

My original plan had been another low key Rubios dinner, but Pumpkin has decided she doesn't like Rubios anymore, and we've decided to humor her on that for awhile. (I suspect that eventually her love of their churros will override her distaste for their quesadillas, and we'll be back.) But we struggled to come up with something else. We ended up at a restaurant in our neighborhood, which would have been really good except it took way longer than anticipated to get there because there was traffic out of the beach area, and when we got there they had the Chargers game on ridiculously loud. I am getting crotchety about needlessly noisy restaurants in my middle age.

We had a hard time figuring out where to go because Pumpkin is a really nervous eater. I understand- I have a lot of the same tendencies to be really afraid to try new food- but I think we need to work on expanding her horizons a bit. She and I have talked about this from time to time, and tried to come up with ideas for how to get her to try new things, but none of them have stuck. I'm frankly stumped on how to handle this one. (Note: I've read Ellyn Sater. I know her advice. It works on Petunia, who is a fairly normal picky eater who is slowly outgrowing it. It has only ever partially worked on Pumpkin, who is perfectly happy to eat nothing but bread or go hungry, but will get upset because she knows that she's upsetting other people... and then spiral into a hangry, miserable mess.)

So anyway, I was thinking about this new phase of parenthood, when the challenges are much more intellectually difficult than they were in the baby/toddler stage. Parenting remains hard, but at least I get to sleep through the night now.

I may eventually write a bigger post about how overwhelming parenting can seem sometimes... but for tonight, I'll just note that hangriness and restaurant difficulty aside, the beach was pretty awesome.

Pumpkin learned how to boogie board and had a blast doing it. Petunia frolicked in the waves. Really frolicked. She was so happy. The grown ups all cooled off and chilled out a bit.

Sure, we have some kinks to work out, but we'll do this again. 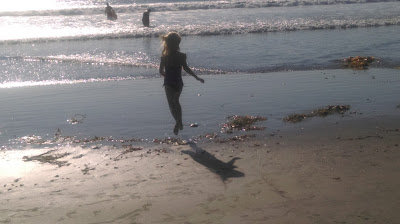