Let's Ignore the News and Talk about Disneyland

I am a bit overwhelmed with all the news right now, and so I'm going to ignore it and talk about going to Disneyland.

The promised Disneyland trip happened last weekend. That is why there were no weekend links: I was too busy wringing every last second of fun out of our two day park hopper passes.

I’m exaggerating, of course: we left a lot of fun behind. There’s only so much Disney a person can take. Still, we did have two full days in the parks, and I feel like we got our money’s worth. Or, at least that we got our money’s worth once you factor in the Disney premium. So if you ignore the egregiously high room rate for a pretty standard hotel room (but it came with Magic Hour!) and the fact that a single serving bottle of Diet Coke (needed to restore equilibrium after I braved a roller coaster) was $4… we got our money’s worth. And I’m not even joking: Disney does a really good job of delivering the fun, particularly if you’re willing to shell out for the premium experience of Magic Hour and pay the extra $10/ticket/day to get MaxPASS on the phone app,

After we got home, we talked about what our favorite part of the two days was. Petunia loved the roller coasters. She didn’t brave the really big ones — the biggest we did was Thunder Mountain (which necessitated that Diet Coke for me), but she went on the little one in Toontown over and over, and she liked Goofy’s Sky School a lot, too. We did the Radiator Springs Racers as the first thing on our first day, and she looooved it. Thanks to the magic of FastPASSes, she and Mr. Snarky rode that ride two more times. She also really liked the Grizzly River Run water ride. She enjoyed the tamer aspects of the visit, too — her top priority was visiting Minnie and Mickey’s houses in Toontown again, and I have the best photo of the look on her face right before she met Minnie. She knows Minnie isn’t real… but still the magic lingers.

And that was the best part of the weekend for me. I wanted to take Petunia back to the park before she aged out of the magic, and I got my wish.

This is the third time we’ve taken the kids to Disneyland, and I’m not sure if there will be another. We made the first trip to celebrate Pumpkin’s 6th birthday, mostly because the idea of figuring out what to do about the kindergarten birthday party stressed me out. Then we did the same for Petunia’s 6th birthday, because that was only fair (and figuring out the kindergarten birthday party didn’t sound any more appealing the second time around). Somehow, the kids decided that this meant that they got a trip to Disneyland on birthdays that are multiples of 6, and we thought “hey, that’s not a bad way to deal with our proximity to Disneyland, so why not?” But I started to suspect that Pumpkin won’t really want a trip to Disneyland to celebrate turning 12. She’s aged out of the magic, and doesn’t like roller coasters or “scary rides” and so Disneyland’s not really the place for her.

I was right about that: she didn’t have nearly as much fun on this trip as Petunia did. Her favorite part of Disneyland was the canoe ride (in which you actually paddle the canoe). She found a lot of things too noisy and I think overwhelming. She’s more a National Parks girl than a theme parks girl. I think that we’ll let her pick a different way to celebrate turning 12. I’d still like to make it a special trip somewhere (I rather like the idea of having a special trip for your 6th, 12th, and 18th birthdays… with the 18th birthday trip marking the end of the childhood vacations) but she can pick a different destination. And if she decides she just wants to stay home and celebrate with friends, I’ll let go of my idea about the special trips and do that.

As for the grown ups: Mr. Snarky’s favorite part was finally getting to do the Radiator Springs Racers ride. He loves the attention to detail at Disneyland, and that ride really showcases that aspect. My favorite part was how much Petunia loved this trip, but when forced to pick an actual thing we did, I settled on the Animator's Academy. That is where you sit in an auditorium and a Disney animator teaches you how to sketch one of the characters. We did it twice, sketching Goofy one time and Olaf the other. Olaf is a lot harder, and Petunia was pretty bummed with how poorly her Olaf came out. But our Goofy drawings weren't too bad. Here's mine: 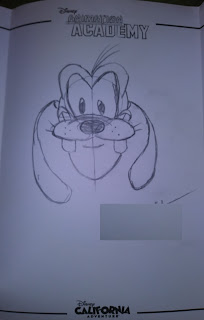 Not great, but pretty amazing given how poor my drawing skills are!

All in all, it was a good trip. The crowds were not bad, even on Saturday (we were there Friday and Saturday — San Diego Unified gives a 4 day weekend for President's Day) and even though our feet were still tired on Sunday, it was worth it.

I would have liked another day "off" — not necessarily in Disneyland, but off from my chores and the things that need to happen around the house, and off from following along with the news. But that wasn't how we planned this trip, so we drove home on Saturday night, and I got up Sunday and picked up my usual chores, then went to work on Monday. And of course, the news continues to be distressing. But the brief respite in Fantasyland was nice.
Posted by Cloud at 7:31 PM