Life in the Time of Coronavirus, Snapshot #2

After I finished work today, I drove Pumpkin down the hill to her friend's house, where she dropped off a box with a gift she'd made inside of it. She left it on the doorstep, not even ringing the doorbell, and then we drove home.

It was like a teenage prank, except it was her wanting to give her friend a gift to cheer her up and this was the safest way.

As we drove down the hill, it seemed like a normal night - people out walking their dogs or just out for a walk, families with kids out for bike rides or playing in the street. But if you paid attention you noticed what was not normal. All the kids were in family groups. No one was playing with friends. The walkers crossed the street when someone approached from the other direction. There were no little clusters of dogs yapping at each other while their owners held their leashes.

San Diego is not on a "shelter in place" order like the San Francisco area is, but life has definitely changed. Our bars and restaurants are closed, serving take out or delivery only. Movie theaters are closed. I don't actually know if all gyms are closed, but I got an email today from the YMCA saying they are closed.

Pumpkin has talked on a video chat with her friends both days this week. Petunia was jealous, so today Pumpkin kept the call open with one of her friends, so that Petunia and the friend's little sister (who is one of Petunia's good friends) could talk. It was nice, and made Petunia very happy. I'll have to work out a way for her to video chat with more of her friends.

My work closed all its offices worldwide today. Many of us had already been working from home. Now everyone is. One of my main clients is in Seattle. They are a couple weeks ahead of us on the work from home thing, and have adopted a culture of "cameras on" in our meetings. Today, I joined them in that. It was fun to see their home offices and they got a kick out of the large collection of LEGO behind me (on top of my husband's desk). Next time, they may get to see my kitchen: My husband and I compare meeting schedules in the morning to work out who gets the office and who moves to the dining room table at different times.

There are news stories circulating saying that taking ibuprofen or other NSAIDs for fever may make COVID-19 worse, and recommending taking acetaminophen instead.  There's a little circle of science/pharma folks on Twitter trying to figure out if there is any data to support this. No one has found any. As close as I can tell, the source is a letter in Lancet describing a HYPOTHESIS about why people with diabetes and hypertension may be at elevated risk. Here is a Twitter thread with the latest, and embedded in it is an earlier thread that led me to that Lancet letter:

I started stressing about this yesterday. I went on Amazon to see if I could order acetaminophen but even as I went there I knew I would not be able to do so.  I seriously considered asking my husband to go to the drug store to try to get a bottle, but he rightly pointed out that (1) there was unlikely to be any on the shelves, and (2) an unnecessary trip to the drug store would definitely put us at higher risk. There is no actual evidence that ibuprofen use would do so.

So I wrote "tylenol" on the list of things to look for next time we go to a drug store, but we decided not to make a special trip out.

And I reflected on human nature and fear and how I'm not really any different from the people who went out and cleared the shelves of toilet paper.

I'll close this snapshot with one of the nice things about this week. I decided to take a walk every weekday, as long as it isn't raining. I usually do this when I'm working in the office, so I decided I should keep my habit at home. One or both of the kids have joined me each day. It was a beautiful day today, so we stopped as we walked up the hill home and admired the view. 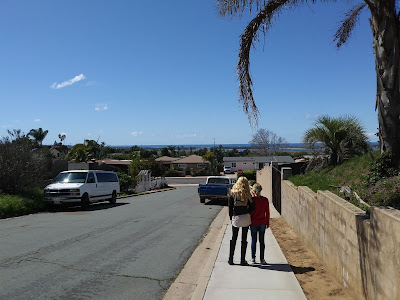 Stay healthy, everyone.
Posted by Cloud at 7:03 PM