I get these hits because I mentioned the differences between American and New Zealand toilet stalls in a post about the differences between America and New Zealand. New Zealand toilet stalls follow the English style, resembling a little room more than a stall. In that post, I noted the difference but didn't try to explain it. In fact, I can't really explain it. This is no doubt disappointing to the English folks searching for answers. If I had to guess, I'd guess that the American style started as a cost-saving thing- stalls are probably cheaper to build than little rooms. However, I'd also guess that there are Americans who find the English toilet stalls as disconcerting as some English visitors apparently find our stalls. If you tend towards claustrophobia, some of the English stalls would probably be difficult to handle. I've been in some so tight that you have to straddle the toilet to get out the door. These tight toilets are usually in pubs, too, which means that you're performing contortions to exit the stall while drunk.

People who find the American stalls disconcerting should probably avoid the toilets at the Sun Cafe on Palau Langkawi, in Malaysia. 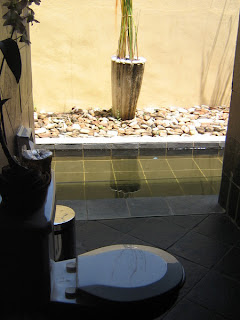 The entire back wall is missing. There is a high wall a few feet away, so no one can see in, but you get the definite feeling of being out in the open. I found this a bit surprising, but once I got over that, I thought it was a nice idea. It made the bathroom feel fresh. In fact, I think some of the beach toilets here in California could benefit from a similar design.

Besides, I was just glad to see a western style toilet in the stall. I got accustomed to squat toilets on our trip around Asia, and certainly do not share the opinion of several of my country women who I met in China: they were happy to wait in a long line for one of the western style toilets at the restaurant we were in rather than use one of squat toilets. Once I figured out that I could jump the queue by going to a squat toilet I did so. But I won't claim that I like squat toilets. I don't have a preference one way or the other about gaps in the stall doors, though.
Posted by Cloud at 7:57 PM