Hubby and I finally have some successes to report in the great day care advancement campaign of 2008.

Pumpkin has never seemed to like her high chair. In fact, at times she seemed to downright hate it- she'd squirm and fight getting in, and she delighted in kicking the tray and sending it flying across the room. I have long argued that we should try a different chair, but Hubby has resisted on the grounds that she might hate the new one just as much as the original one. However, her reaction to her original booster seat (a shower gift) gave me more data from which to argue: I think the problem with both the high chair and the original booster seat is that she is too small for them. She is small for her age, and neither chair gave her much support. Hubby finally caved, and we bought a new booster seat. I thought $20 was not too much to pay for the chance of easier meal times, and it turns out that I was right. Pumpkin doesn't fight going into her new chair, and she seems much happier in it. She has even been more willing to try new foods in it. 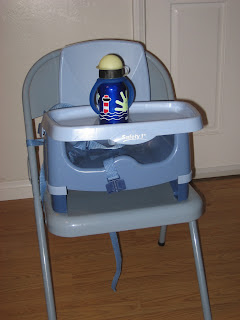 Of course, this could be a coincidence, and she is still not tearing through the new finger foods. However, the new arrangement makes it easier to pull her up to the table, where she can see what we are eating, and (we hope) point at my plate and demand some of the food on it.

Whatever the reason, she is now eating mac and cheese (or, more specifically Annie's Peace Pasta and Parmesan- hubby hates orange cheese, and I had to buy something we would both be willing to model eating for Pumpkin). I send a little tub of it to day care every day for lunch, and already feel less like a loser.

I've also got Pumpkin drinking a little bit of cow's milk every day. I poured some in a fancy SIGG cup we'd bought Pumpkin for Christmas (displayed on the not so fancy new high chair in the picture above). I was planning to drink from the cup to get Pumpkin interested, but it turns out there was no need. She saw the new cup and immediately started pointing and saying "a-a-a-a", which is her way of letting us know that she wants that, thank you very much. Apparently, she just didn't approve of the cup in which we were serving her the milk. The plastic sippy cups are only for water. How could I not have known that?

This experience made us wonder if we needed a breastmilk-specific cup, too. We were looking through the cup options on Amazon last Friday night when we saw the perfect thing to try. We use Avent bottles for her breastmilk. They sell a "training kit" for training babies to use a sippy cup, which consists of little plastic handles to go on the bottle and the sippy part of an Avent sippy cup, which you use in place of the nipple. Well, Pumpkin doesn't care much for sippy cup handles, and can in fact already hold her own bottles. And we have a couple Avent sippy cups (which Pumpkin never much liked), so we could steal the sippy tops from those. Yesterday, Hubby asked if the bottle + sippy top would meet the requirements for moving Pumpkin to the next room, and was told that it would. So today, we sent one of her bottles with the sippy top. If I'm reading the notes from the day care teacher correctly, Pumpkin happily drank four ounces of breastmilk from that bottle with the sippy top. Could it really be that easy?
Posted by Cloud at 7:48 PM