We've been taking Pumpkin to Mission Bay, as an introduction to the beach. The bay has several nice sandy beaches with no surf and shallow water- perfect for babies. Given Pumpkin's aversion to trying new foods, I suppose it shouldn't have surprised me that she didn't take immediately to the bay. The first two times we went to the bay, we couldn't even convince her to get wet.

The first time, she shrieked and pulled her legs up when we tried to put he down to walk on the beach. Of course, this was at De Anza Cove, where the beach was essentially mud. Pumpkin isn't too fond of squishy food, so perhaps she didn't like the squishy mud, either.

The second time, we drove to Bonita Cove, a part of the bay with a sandier beach. She liked the sand. We spread out towels and spent an hour happily playing with our sand toys. We tried taking her down to the water, but she got frightened and clung to whoever was holding her whenever we got near the water.

The third time seemed to be doomed to have a similar outcome. Hubby stayed home to work in the garden while my parents and I took Pumpkin to the beach. We spread out towels and got out her toys, and she happily played in the sand. We took turns going down to the water and splashing our feet in the "big bath", but Pumpkin wasn't convinced. She whimpered and whined whenever one of us would head to the water, clearly still afraid. Then I got the idea to bring some water to her in her buckets. At first, she was suspicious, but she was soon playing with the water in the buckets. 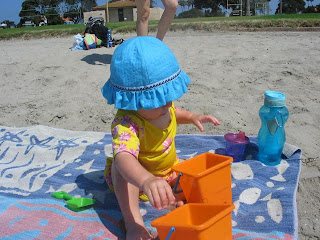 I figured that was progress enough for the day. We could come back next weekend to try again. Then Pumpkin got up, and started walking towards the water. She'd stop every now and then, and you could almost see her debating whether she should turn back. But she kept going, and eventually had her feet in the water. It wasn't too long before she was happily playing in the bay. 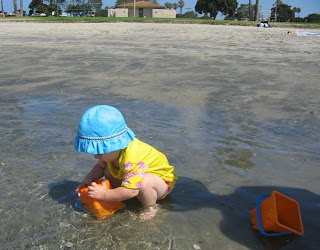 She went in deeper, too. A "wave" even knocked her down, so that she was sitting in water up to her chest. And she just laughed and smiled. She didn't want to leave the beach when it was time to go to lunch.

Pumpkin had a great time at the beach, but I think I had even more fun than she did.
Posted by Cloud at 8:51 PM