One of the (many) reasons I blog is that it captures some of the little things about motherhood and my children that I wouldn't otherwise write down. This post is about that- if you're looking for anything deeper, click away now.

I've been struck recently by how grown up Pumpkin is seeming. For one thing, she finally had her first haircut yesterday. Can you tell which is the before and which is the after picture? 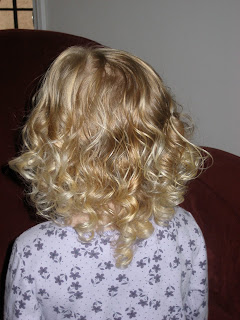 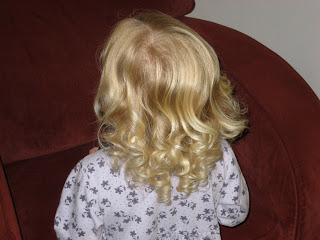 But the first haircut milestone- the last one in her baby book- is just an outward symbol. The growing up that is really amazing me these days is in what she knows and understands. For instance, one day last week, I took a slightly different route to our house after turning off the main street. I was avoiding some traffic on our usual route, as I explained to Pumpkin when she asked "why are you going this way Mommy?" I went straight instead of turning left, and turned left one block later. I drove up that street and turned right onto our street. She announced the name of our street as I turned onto it, and then, as I passed the next cross street (the one we walk down to get to the park), told me "we could have come up this street, the park street, too, Mommy. That would have worked, too." She was right, of course, and I was surprised by the sudden realization that she has a little map of her neighborhood in her head, marked with the important things, like our street and the park.

Petunia is growing fast, too. She already weighs more than Pumpkin did at a year- she is more than 20 lbs. My back and arms feel that weight, let me tell you. But it makes her so cuddly that I forgive her for the extra workout. Well, it makes her cuddly on the rare occasion that she wants to be cuddled. These days, she wants to be down on the ground, trying to crawl. She is so close, and so frustrated by her inability to get the last few pieces to fall into place, it almost breaks my heart.

Pumpkin spent at least a month almost crawling. She took the route that I assume is more usual- from tummy time, she pushed up on all fours, and then rocked and rocked until finally, one day, the lure of my computer was too much and she set off crawling across the floor to get to it.

Petunia is going about it her own way. She isn't too fond of tummy time, and hasn't been since she learned how to sit. She has now learned how to sit up on her own from tummy time, so once she remembers that she knows how to roll over, getting her to stay down in her crib is going to be a challenge. We have lowered the mattress in expectation of this event. Now, if I put her in her crib sitting, she grabs onto the bars and rattles them, or grabs the top bar and tries to pull up and/or teeth on it, all with a grin on her face and a bit of mischief in her eyes.

Anyway, her almost crawling looks different than her sister's did. She starts from sitting, and lunges forward for a toy. She has amazing range- she will flatten herself out into a pose that would make my yoga teacher proud, and then pull herself back up, with the toy clutched in her hand and a triumphant smile on her face. For several weeks, she was getting her right leg stuck underneath her, in half of a cross-legged pose, and then whining because she can't crawl. Next, she figured out how to free the leg, but the weight of her chubby little bottom was too much for her arms, and she sprawled onto her tummy. From here, she is likely to start scooting backwards across the floor- and boy, did that delight her for awhile- until she runs into a cupboard or refrigerator or some other barrier, at which point she will pull her legs into an almost split and then sit up.

Just this weekend, she has gotten strong enough to keep her bottom in the air and reach forward with her arms at the same time. She hasn't actually crawled yet, but she is so close that we're constantly hovering with the camera, sure that this time will be it, and wanting to capture that moment for her baby book. Anyone want to bet how much longer we'll be in this almost crawling stage? And whether we will have given up and forgotten about the camera by the time she actually manages to crawl?
Posted by Cloud at 9:55 PM