I think the hardest part of my day is the time between when I get home from work and dinner. Hubby and I stagger our schedules by about 30 minutes. I go to work earlier in the morning, thereby skipping the struggles over sunscreen and any tears at day care drop off (although those aren't very common these days). However, the flip side is that I have to solo during dinner prep time. We prioritize family dinners- we aren't adamant that Petunia eats with us (although she usually does), but we do want to eat with Pumpkin most nights. That priority, Petunia's bedtime requirements, and my commute time combine to give me less than 30 minutes to get dinner on the table most weeknights.

Here is my weeknight drill: I walk in the door, drop my bags on the table, get Petunia out of her car seat and set up with some toys, start an episode of Dora for Pumpkin and then head to the kitchen to cook dinner- reappearing to do the "We Did It!" dance with Pumpkin. The dance is not optional.

That gives me approximately 22 minutes to get dinner ready.

Oh, and I want dinner to be reasonably healthy, and to include one thing that Pumpkin- whose incredibly picky eating is surely a karmic payback for my own childhood food foibles- might eat.

I've decided to start a series of posts that I'll call "Dinner during Dora", which will have recipes that I use frequently. I'm starting this series of posts with the hopes that some of you might like the idea and do your own "Dinner during Dora" posts. Mimi already has one up (and it looks good- I particularly like the idea that if I time it right, I might actually use some of the gazillion avocados our backyard tree produces every year). I've turned on the "trackback" feature on the blog, so if you link to this post (and not just to my home page), a link to your post will appear at the bottom of this page, and we can all find new recipes. If you don't have your own blog, let me know if you want to send in a recipe for me to post for you. The only requirement is that you can make it in roughly the time of one Dora episode- so 30 minutes, start to finish, is the absolute limit. 20 minutes is better!

I think this may actually get me off the fence about Twitter, too. I'll set up a Twitter account for this blog (what should my handle be? I rather doubt I'll get Cloud. Maybe "Wandsci"?) and start some sort of Dinner during Dora hashtag. It may take me a few days to get that all set up, though.

I'll always list the source of the recipe, and I'll tell you who in the family eats it.

So without further ado, here is the first Dinner during Dora recipe:

Instructions:
1. I start the bacon cooking first. That way it is done and ready to crumble by the time I need it. 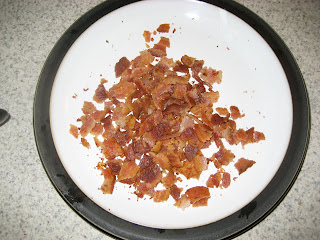 2. Heat the olvie oil in a large skillet or shallow pan over medium heat. (Note: I don't know how this would work in a non-stick pan- I use a regular pan.)
3. Add the garlic and cook for about a minute. I like the garlic to brown.
4. Add rice and stir until the grains are coated with oil.
5. Add broth. Stir and bring to a boil.
6. Reduce the heat to low, cover and simmer for 15 minutes
7. Add corn. Stir and cook another 3 minutes, or until the rice is done.
8. Remove from heat and stir in cheese and bacon. 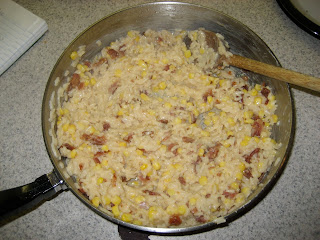 I serve this with a green vegetable- usually either green beans cooked in OJ or zucchini fried in olive oil. I can make either of those while the rice simmers. I'll post recipes in a later installment of Dinner during Dora.

Source: I made this one up. The basic idea for how to cook the rice came from The Working Stiff Cookbook

by Bob Sloan and Michael Klein. The basic recipe can obviously be varied in many ways. For instance, if you like peas (I can't stand them), you could add frozen peas instead of
or in addition to the corn. Our mix-ins were chosen because at one point, Pumpkin has eaten all of them. (That doesn't mean she eats them now- she's gone off bacon for some reason, and despite proclaiming "I like it!" every time she tries corn, she won't eat it if it just shows up on her plate.)


Who eats it: So far, just me and Hubby, but Pumpkin has only seen it 4 or 5 times, and she often takes much, much longer to warm up to a new food. She has in fact never eaten any rice- or at least not at home. She apparently eats the "orange rice" at day care, which is some sort of Spanish rice that they serve with tacos and beans. Two other foods she will only eat at day care.  Petunia is too young for this dish, but next time I make it, I will pull out some of the rice before I add the cheese and bacon and see what she thinks of it.

For some reason the Links to this Post feature isn't working... I don't have time to troubleshoot right now. So just post a link to your post in the comments! I'll try to figure out what is going on with the trackback thingy soon.

OK, the trackback thingy just isn't working, and I can't figure out how to fix it. So here are the other Dinner during Dora posts I know about. Email me or post a comment here to have me add yours to the list: