I've written before about Pumpkin's lack of interest in eating anything resembling a vegetable- we keep trying, but I think that realistically, she is unlikely to voluntarily eat most vegetables for quite awhile.  Petunia, meanwhile, still likes her veggie purees, but has taken to tossing any solid vegetable presented to her off of her tray. Again, we'll keep trying. But in the meantime, I want to get some vegetables into them. This is why I love Carrot Cake Pancakes so much (OK, that and the fact that they are really yummy). Petunia will eat two of those in a sitting. Pumpkin, though, isn't a fan of them, and will only nibble on one- and only if it is covered with powdered sugar and strawberry jam.

So I've been trying other vegetable baking ideas. Knowing this, my Mom gave me the recipe for the carrot-containing cornbread that she used to use to sneak some vegetables into my diet. I've made them a couple of times now, and we've had some success. I usually serve them with soup. I most recently served them with this delicious cream of zucchini soup, but a can of soup would work well, too. In fact, Pumpkin had canned ABCs soup with her muffin: neither she nor Petunia was interested in trying our zucchini soup. That's OK- I believe in gradual improvements and modeling good eating habits.

This recipe is a bit of a stretch for Dinner during Dora- you can't go from start to the table in 22 minutes or less. However, you can easily get these in the oven, some cans of soup on the stove, and the table set during a Dora episode.

1. Preheat the oven to 400 degrees Fahrenheit and prep your muffin tins- the recipe makes 12-15 muffins, so line that many tins with cupcake papers.
2. Shred the carrots. Since Pumpkin turns up her nose if she sees carrots in something, my Mom suggested using my microplane. This works great. 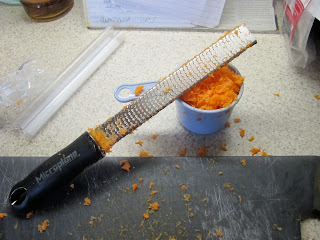 3. Sift together the dry ingredients.
4. Combine milk, egg, and shortening.
5. Add the milk mix to the dry ingredients and blend. The recipe says "until just mixed", but I suspect I blend a little bit more than that, and they turn out fine.
6. Fold in the carrots and the brown sugar. 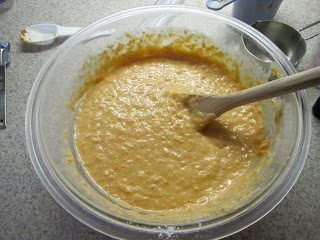 7. Spoon into muffin tins, leaving about a pinky-width at the top.

I forgot to take a picture of this until I had them in the oven: 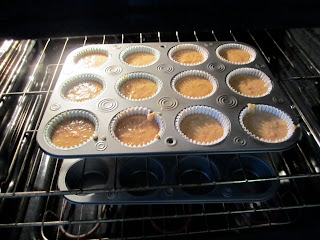 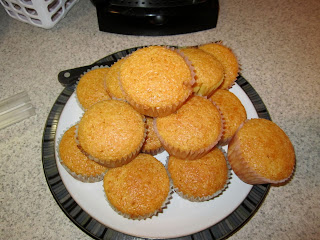 Source: As mentioned above, this one came from my Mom. I don't know where she got it. The original recipe is for regular cornbread. You bake for 45 minutes if you make this as cornbread (probably in a 8x8 inch pan- that is what I remember from my childhood).

Who eats it: Everyone! Yes, even Pumpkin. Petunia likes them, too.

I did a little searching online and found the dietary recommendations and suggested serving sizes for preschoolers. A serving of vegetables is 1/4 cup. I'm not sure if that applies to the shredded carrot or not- shredded carrot is a lot denser that sliced carrot. Anyway, as you can see in the recipe, this has 1 cup of carrots, which gets divided between 12-15 muffins. So I figure that each muffin is roughly 1/3 of a serving of vegetables. This isn't great- but it is a lot better than the zero servings of vegetables I can usually get into Pumpkin, so I'll take it as a start!
Posted by Cloud at 3:15 PM