My husband was helping me troubleshoot a technical issue on my blog last night (if the lack of left padding on the title of my blog was bothering you as much as it was bothering me, you can thank Hubby for helping me find the right section of the CSS to modify). He noticed that Bunny And Me

, by Adele Greenspun and Joanie Schwarz, is up as what Petunia's currently reading. He told me that was wrong- she liked that months ago. In fact, she did like it months ago, but it is back in favor again. Leaving aside the fact that Hubby hadn't noticed that yet (we take turns reading her stories and getting her down for the night, so he has had ample opportunity), this interests me because Pumpkin did the exact same thing. She loved that book as a young baby, and then picked it up again as an early toddler. In fact, Petunia and Pumpkin both seem to respond to the same part of the book. There is a page where the bunny hops away from the baby, and the baby cries, "Come back, Bunny!" 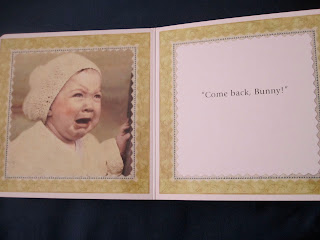 Just like her sister did, Petunia perks up here, and starts helping me turn the pages. We go through a couple of pages where the baby searches for the bunny: 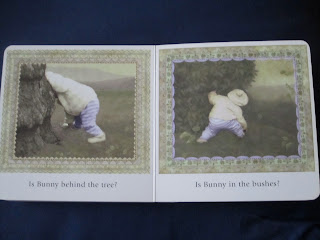 And then the bunny is found: 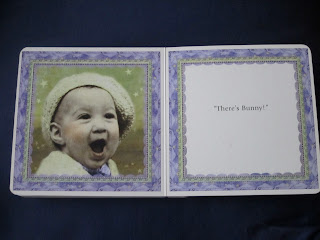 My theory, which of course I can't prove, is that my girls are responding to the emotion on the baby's face in the book.  I am fascinated by the fact that both girls respond in the same way, since in other respects, they have quite different reading behaviors. Pumpkin has always loved to be read to, and would always sit still and listen- even sitting through some fairly long books at an early age. Petunia is a little more restless. She is more of a fan of the books that have things to touch (like That's Not My Puppy

, by Karen Katz). And whereas Pumpkin mostly accepted whatever book we read to her, Petunia has not only favorites, but books that she will push away.

This has made me think about my own reading preferences. I'm a bit like Pumpkin, in that I will generally read just about anything you put in front of me. I do have preferences, though. I enjoy a good story, but if I don't come away feeling like I have learned something, I am disappointed. Perhaps for this reason, I tend to gravitate towards non-fiction books. I'm reading Genghis Khan and the Making of the Modern World

, by Jack Weatherford, right now, and am really enjoying it. I didn't know much about the Mongols or the empire before I started the book, so I'm learning lots of new facts. But facts are not the sort of "learning something" that I really want from a book. For me to really like a book, I need to feel that it has taught me something about my world. This book, for instance, is making me rethink some of my assumptions about violence in our modern society. As violent as our entertainment, and indeed our society, has gotten, it is nothing compared to the casual cruelty and lack of respect for human life exhibited in the time period covered by the book (primarily the 13th and 14th centuries).

The accepted turmoil and uncertainty that the author advances as a motivating reason for Genghis Khan's unification of the Mongol tribes dwarfs the sort of uncertainty we face today- from the common, like losing a job, to the extremely unlikely, like being a victim of a terrorist attack. People living in Mongolia at that time could expect frequent raids to capture livestock and kidnapping was an accepted way to secure a bride. But even this seems like nothing compared to the behavior of some of the "civilized" societies that the Mongols conquered. One passage from the book is particularly horrifying in this regard. It is discussing the campaign of Frederick Barbarossa of Germany against the Lombard city of Cremona, in 1160.


"[Barbarossa's] men beheaded their prisoners and played with the heads outside the city walls, kicking them like balls. The defenders of Cremona then brought out their German prisoners on the city walls and pulled their limbs off in front of their comrades. The Germands gathered more prisoners and executed them in a mass hanging. The city officials responded by hanging the remainder of their prisoners on top of the city walls.... The Germans then gathered captive children and strapped them into their catapults, which were normally used to batter down walls and break through gates. With the power of these great siege machines, they hurled the living children at the city walls."

So, um, yeah. They didn't include that in the history of the middle ages that I learned in school. I guess what I take from this is two-fold. One, that we humans have always had the capacity to inflict great pain on our fellow humans, so it is unlikely that our current culture is making us uniquely inhumane. And two, it seems that we have actually gotten more humane over the centuries, so we should not despair of our ability to improve. If Western culture can get from the point where it was acceptable to fling children at castle walls to the point where the abuse of any child is a crime, then surely we can get to the point where said abuse is so rare as to be unthinkable.

Anyway... back to books. I don't want to imply that I only like to read non-fiction. A good fiction book can teach me things, too. For instance, I recently read People of the Book

, by Geraldine Brooks, and wow- this was an excellent book. If you haven't read it, you should. It was inspired by the true story of the Sarajevo Haggadah, but is entirely a work of fiction. It weaves together the story of a modern day book preservationist/historian asked to examine the Haggadah with the story of how the Haggadah was created and preserved through the centuries. As you might imagine, the latter story is full of heart-breaking events as time and again, religious intolerance brings ruin down on the people in the story. Brooks' genius is to tell this story backwards in time, so you are peeling away the mysteries about the Haggadah like layers of an onion. I think this makes it possible for the reader to absorb each new horror as a tragedy that befell individuals as well as a people, without making the book so dark that you would put it down in despair. In fact, I found it to be ultimately a hopeful and uplifting book. But what it taught me, in a way that none of the facts I knew about the calamities that have been visited upon the Jewish people over the centuries had, is why the state of Israel must exist.

Don't get me wrong, I still look at the mess in that part of the world right now and wish for all sides to agree to a two-state solution, but maybe now I understand a little better the history that has formed the people on the Israeli side, and have a better feel for why they need a Jewish state. If you are finding yourself shaking your head at the newspaper and wondering why the Israelis are being so difficult about settlements and the like, I suggest you read this book. It might help you understand. Now, if only I could find a book that would give me the same understanding of the Palestinians. And somehow magically get the people on each side to read both books... then we might make progress! Hey, a hopeless optimist can dream, can't she?

I just realized that my two examples of books that I've liked are both about violence, and the dark side of human existence. But that is not because I don't like to read lighter books. In fact, books that have taught me about love, family, and the more everyday sort of human interactions are among my favorite books of all time. I am an unapologetic fan of Jane Austen, and have read all of her books at least twice. I have lost count of the number of times I've read Pride and Prejudice (and watched the BBC/A&E edition of it

), although as I get older, I find that Persuasion

is becoming more of a favorite. That probably has something to do with the theme of having a second chance at something important that you missed as a youth, but I couldn't say for certain. Regardless, Pride And Prejudice

was the first book I downloaded onto the Kindle

my husband got me for Christmas- I could get it for free, and since I have parts of it memorized, I thought it would be a good way to test out the Kindle reading experience.

I've really liked reading on the Kindle, by the way. It is one of the technology gadgets I've gotten that has not disappointed me. I thought that it would be good for reading while holding a sleeping baby, and I was right. It also works really well for reading while nursing a baby. In fact, if you need a gift for a pregnant woman or new mother, and she likes to read, the Kindle would be an excellent choice.*  I was able to browse for a book, purchase it, and start reading while pinned under a sleeping Petunia one day. I wish I'd had THAT capability when she was younger and fond of taking three hour naps while being held. I'd have watched a lot less NCIS.

*I think the Nook would work, too, but not, unfortunately, the iPad. I tried a friend's iPad out, and I think it is too heavy for one-handed reading, which is essential for the use as a companion to a new mother.
Posted by Cloud at 4:08 PM