The Universe Gives One Back

Thanks for all the nice comments on my last post. I guess there is some interest in the nitty-gritty details of how Hubby and I make our lives work. I may try to write some more posts about that sort of thing in the future- but I need to think a bit more about where I'll draw the line on what is OK to write about and what needs to stay private, and also about what sorts of details might be interesting/useful to others figuring similar things out and what sorts of details are dull and really specific to our own particular circumstances. But hey, you few people who are interested in this sort of thing, if you have specific questions, let me know. I'll see if I can answer them.

Anyway, as Monty Python would say... And now for something completely different: a short story about how sometimes the universe throws you a bone.

About three and a half years ago, when we moved into our current house, I lost a canvas bag. This was more annoying than you might think, because it was a bag that was a souvenir from our big trip- and we didn't bring that many souvenirs back from that trip, particularly when you think about the length of time we were gone and the number of places we visited. This particular bag was one of our few souvenirs from the Australian leg. We bought it in the Blue Mountains. I liked the colors, and the funky aboriginal-influenced design. And I liked how looking at it reminded me of that beautiful region of Australia, and the awesome hike we took there. I walked down something like 900 steps (this is not an exaggeration), hiked for an hour or so, had a gigantic fight with Hubby about whether or not we were lost (we were- I was right, and he later admitted that he was glad that I had made him turn back since if we'd kept on the path he insisted was the right one, we would have come out some 20 miles from our hotel), and then, having missed the last cable car ride back to the top, where our hotel was, walked back up those same 900 or so stairs. I love that I was once fit enough to do this. I love that we were able to bounce back from that gigantic fight as well as we did- neither of us held much of a grudge from it (despite the fact that my butt was really sore after walking up those 900 or so stairs), and it is not only just a funny story now, it was a funny story by the time we got to dinner that night. I love how much more we enjoyed watching the sunset over the three sisters after that trek. And the bag reminded me of all of that.

So anyway, I was sad to lose the bag. I was sure it was hiding somewhere in our house, and I kept looking for it, off and on.

Then, two days ago, while I was picking up Petunia's things at day care, I saw the bag. It had spent the last three and a half years living in the walking babies room at our day care, being used as a toy. They gladly returned it to me, and it is now back home, stored in with my other bags. 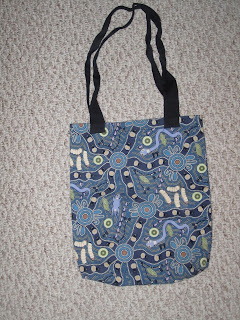 The best part is, I now know exactly what happened to it. We used it to carry extra clothes for Pumpkin in to day care, and left it there. It fell out of her cubby and got mixed up with their toys. And lived there, serving as a play purse to quite a bunch of little toddlers until one day, the universe decided that it was time for it to come home.
Posted by Cloud at 9:56 PM