Petunia's bedtimes have gotten... unpredictable. She's usually pretty easy to get down. We read stories, turn lights out, rock for 10-15 minutes, and put her in her crib. But occasionally, it all goes haywire and she's a bear to get down. This no doubt coincides with some developmental leap- the glory of the second child is that these random sleep freak outs don't freak me out, so I haven't researched it obsessively and don't really know whether we're at a particular milestone or not. All I know is that suddenly, we're rocking her for 30 minutes, and then she's arching her back, whining and shaking her head no (all with her eyes closed, of course), when we stand up from the rocking chair and head towards her crib.  So we've started just taking her into our room and lying down with her.

Normally, we're partial night cosleepers. Petunia goes down in her crib and then joins us in our bed when she wakes up. The first time around the sleeping casino, I would have fought this change to being a full night cosleeper. This time, I've just shrugged and let it happen. And noted that sometimes, when she's in our bed from the start, she doesn't wake up in the night at all. Bonus!

So we're rolling with things on the sleep front. Until last night, when she changed things up again. She didn't want to go to sleep, full stop. If I took her into our bed, she thrashed and kicked and played and giggled. We tried watching some TV with her (that worked the last time she went through an "I don't want to go to sleep phase"). No dice. Finally, two hours after her usual bedtime, I put her in her crib, wide awake, and walked out of the room. She cried a very little, then started talking to herself, and then fell asleep. Hubby, who thinks we should try this more often, gave me a look of triumph.

But then tonight, she fell asleep in my arms after 10 minutes of rocking. So who knows? I think we just need to look at every night's bedtime as a new adventure.

Aside from the bedtime fun, Petunia is pretty darn cute right now. She's talking more and more, although she is not always easy to understand. The signs she knows help- otherwise there is no way I would have deciphered her pronunciation of "cereal". But there is still no guarantee that we will understand what she wants. Frankly, I think she knows more signs than we do. So when we do figure it out, and get her what she wants, she gets a big grin, bounces a little, and says "yeah, yeah!" That almost makes up for the screaming when we don't figure it out.

She's also started giving out kisses. She leans in, and smacks her lips together right next to your cheek. A sweet toddler kiss cures many woes, let me tell you.

Speaking of sweet kisses, Pumpkin has been handing them out, too. She'll throw a massive tantrum about something that is trivial to us but very important to her- like whether or not she has to share her baby doll stroll with Petunia (the answer is yes, if she is going to leave it in the living room)- and then a short time later come give me a hug and a kiss and tell me she loves me. I suspect this is fairly normal four year old behavior, but the hug and kiss never fail to make me forgive her for the tantrum.

Pumpkin is a snacker, much like me. She eats small meals, and needs her snacks (she gets a morning, afternoon, and before bed snack). Petunia is not so dependent on the snacks. She eats far better at meal time, and snack time is hit or miss with her.

We still always offer snack, though, and she'll often accept a few bites, especially if I'll hold her on my lap while she eats. Tonight, she ate a cracker and a few yogurt melts, and then arranged the rest into canapes that could only appeal to a toddler:

When Pumpkin was roughly Petunia's age, my sister gave her a Seek & Slide in the Desert

book. The premise is simple- there is a small amount of text, and then pictures of animals found in various deserts, hidden behind a sliding piece of cardboard with the name of the animal on it.

Pumpkin loved that book, and now Petunia does, too. Like all books they love, it has grown a bit stale for the parents.

Luckily, our copy has a doozy of a typo on the Australian Outback page: 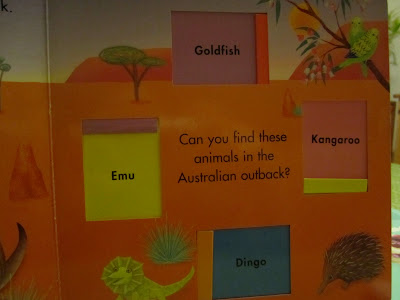 It feels like something from a Monty Python sketch. I chuckle to myself every time I see it. It is the little things that keep you sane as a parent.

(By the way, the animal that is actually hidden behind the "Goldfish" text is a kookaburra. That just makes it funnier to me.)
Posted by Cloud at 9:58 PM