I had so much fun writing the award show version of last year's California car trip that I decided to do it again this vacation. As I mentioned in my last post, we visited San Antonio, Houston, and Austin, in that order. We drove between San Antonio and Houston via Shiner (home of Shiner Bock beer) and between Houston and Austin via Brenham (home of Blue Bell ice cream).

Best hotel: The DoubleTree Suites in Houston. Our suite was really big, and I was the randomly chosen "guest of the day" so breakfast and internet access were free. It is located very close to the Galleria shopping mall, so we were able to walk over for dinner on our first night, when the thought of driving any more was thoroughly unattractive. The pool was really nice. And, like all DoubleTrees, they greeted us with warm cookies, which were yummy and much appreciated by the kids.

But really, all of our hotels were good. We stayed at the Drury Inn and Suites Riverwalk in San Antonio, and that had a great location and the breakfast and internet are free for everyone, not just one lucky guest per day. Their pool was nice, too, and located on the rooftop, which amused Pumpkin. The bathroom was a cramped for a family of four, though.

We stayed at the Embassy Suites in downtown Austin. That had a good location- walking distance to Threadgills and the bat viewing bridge, but our room had a shower, not a bath, which was annoying for Petunia and anyone who tried to wash her. The pool had waterfalls, though, and that was deemed very cool.

Favorite dining experience: Woodrow's in Houston. We drove down to Galveston after our outing to the Space Center, and had originally planned to stay in Galveston for dinner. But the kids got weird about the beach and didn't want to stay there, and it was hot and nothing else sounded that interesting to us... so we drove back to Houston, planning to walk over to the mall again for another chain dinner. But on our way back to the hotel, I saw Woodrow's, and on a whim, we stopped. That was a good decision. It was more bar than restaurant, but they welcomed us and our two kids warmly, found the one high chair they owned for Petunia to sit in, and brought us a pitcher of Shiner for $6. I had to drink far more than my fair share so that Hubby could safely drive to the hotel... that was as buzzed as I got on this trip, and it certainly made the rest of the evening happier.


We had yummy hush puppies to start. I followed with a chicken and sausage jambalaya, and Hubby followed with a crawfish etouffee, and I don't think it was just the beer that made us think the food was good. But the best part of the experience was the feeling that we'd stumbled onto a local favorite (the place was packed).

Most surprisingly good meal: Rita's in San Antonio. I picked it for lunch because it was close to our hotel and therefore provided an easy return for naptime after a hard morning spent cruising the river. But the fajitas were really quite decent. And the margaritas were my favorite of the trip until....

Best margarita: The La Condessa Margarita at La Condessa in Austin. Their regular margarita was really good. The La Condessa was awesome. This was another lunch stop, after a walking trip to the state capitol. It was a higher class restaurant than we usually attempt with the kids- they didn't even have a kid's menu. But they happily welcomed our kids (and they had high chairs), and the kids happily ate plain tortillas and colored while the adults happily consumed their margaritas and food, so everyone was happy.

Best hamburger: The Blue Star Brewing Company in San Antonio. It was juicy and delicious and... yummmmm. The beer wasn't bad, either, and Hubby enjoyed the smoked vegetables. They just tasted like vegetable to me, but he raved about the smokiness, and since vegetables don't normally taste terrible to him, I'd go with his opinion over mine.


Best local beer sampled: Hubby picks the St. Arnold's Elissa IPA. I pick the Shiner Wild Hare Pale Ale. But really, this wasn't a great beer trip. Luckily, the margaritas made up for that.
Most disappointing meal (Mommy): Lupe Tortilla in Houston- not for the food, which was fairly good Tex-Mex, or the margaritas, which were good enough, but for the fact that our guidebook had said there was a playground for the kids, and there was not. They still did fine with their lunches, though, so it was not a bad experience. It just wasn't the awesome, "sip my margarita while the kids play" experience I was expecting.


Most disappointing meal (Daddy): Dickey's BBQ in Austin. Our kids don't eat BBQ and BBQ places don't tend to have kid's menus. Hubby searched and searched and found one that did... and it turned out to be a fast food like chain with good but not great BBQ. The staff were super friendly and I did get to experience a Texas-sized baked potato loaded with brisket, though, so again, it wasn't a bad experience. But in retrospect, we should have just gone to a real BBQ place and hoped our kids would eat the rolls.

Best ice cream: Pumpkin would probably pick the Birthday Cake ice cream at La Condessa, or possibly the vanilla with fudge concoction I had at the Blue Bell creamery in Brenham. I'd pick the French Silk ice cream at The Chocolate Bar in Houston, but I was also really enjoying that vanilla/fudge ice cream before Pumpkin decided it was nicer than the rainbow sherbet she'd picked and convinced me to swap with her. So maybe that is the consensus choice.

Best tourist attraction: The Space Center in Houston. Standing next to the Apollo 18 rocket (it was built but never used) really was awe-inspiring, except perhaps for Petunia. But she did at least enjoy saying "rocket" over and over while I carried her down the hall. 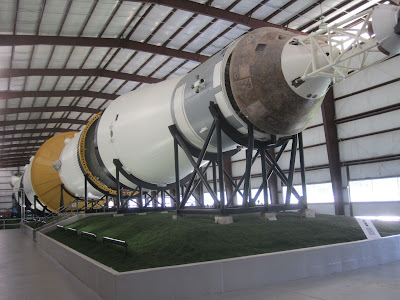 Most disappointing tourist attraction: The bat fly-out in Austin. Perhaps we were disappointed because it took us three nights to actually get to see it- we were rained out the first night and about five minutes too late the second- and therefore over-hyped the experience. But we could hardly see any bats, which annoyed Pumpkin, confused Petunia, and made Hubby and me reminisce about more spectacular bat fly-out spotting expeditions in Brisbane and Bundaberg.

Best parenting moment (Mommy): Noticing the Spanish rice on the Threadgill's menu the first night in Austin, correctly guessing that I'd be able to get it past the owie in Petunia's mouth, and then carefully feeding an entire serving to her- getting her a real meal for the first time in three days. She and I were both much happier after that.

A close runner up was my brilliant plan to get Petunia to watch Pumpkin take a shower that night, thereby convincing Petunia to take a shower without protest and sparing us from having to move rooms (and possibly hotels) on the second night in Austin. Unfortunately, the experience didn't stick, and Petunia screamed through her showers the next two days (we did a lot of swimming, so we couldn't just let her skip the wash). But at the time, I felt like a parenting genius.

Best parenting moment (Daddy): Conveying the excitement of the Space Center to Pumpkin, and hearing her proclaim that she wants to be an astronaut, at least on weekends. (This also didn't stick, but it was nice while it lasted.)

Best kid moment (Pumpkin): Taking photos of... just about everything, but particularly of Petunia. Petunia smiles best for Pumpkin. Pumpkin also took pictures of unusual little details we might otherwise have missed, like the grillwork on the fountain we walked past on the Riverwalk. 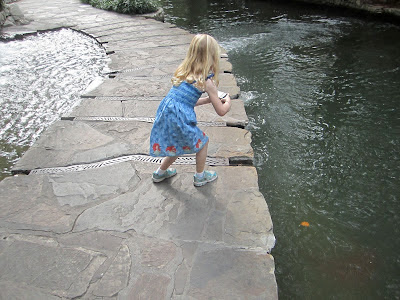 Best kid moment (Petunia): Announcing as we entered just about any restaurant that she wanted "shicken an' fies... AN' KESSUP". (Chicken and fries... and ketchup, with special emphasis on the last part provided by a dramatic pause and a finger held up and waggled at the nearest adult.)

Worst packing error: We forgot to bring a bottle opener for our post-bedtime beers. Which meant that we had to buy one in San Antonio. You guessed it, we now own a bottle opener that says "Don't Mess With Texas".

Most unexpectedly cool thing: The sunken Japanese garden in San Antonio. The main building alone was worth the excursion. 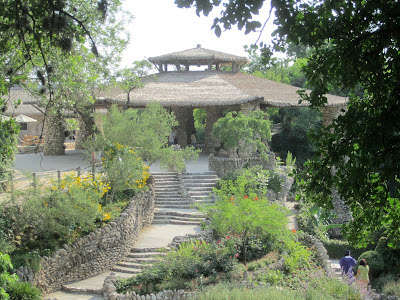 Concept most missing in San Diego: The big shady patio with a playground, beer, some food, and a very laid back atmosphere. Apparently, this is called an "icehouse". We experienced it at The Friendly Spot in San Antonio. The closest thing we have in San Diego is The Station, which is great, but not quite the same. And nowhere near as shady. (Hubby correctly points out that good shade trees are harder to come by in San Diego, but surely someone can solve that problem!)
Posted by Cloud at 10:27 PM