The first stop on our Big Texas Vacation of 2012 was San Antonio, and in many ways, it was my favorite. Our hotel was on the edge of the "interesting" part of the Riverwalk, which turned out to be the perfect location for us. We could walk to almost everything we wanted to see, were close to the most happening part of the Riverwalk, complete with family-friendly restaurants, but it wasn't too noisy or hectic. 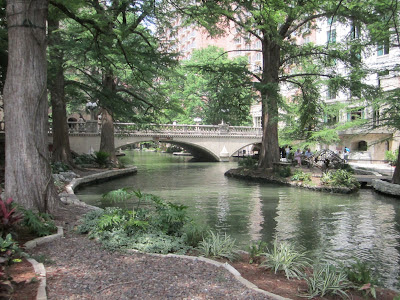 Also, our room was on the same floor as the pool, which was a hit with the kids. And the adults, since we landed in San Antonio during an unseasonably hot spell, with highs in the low 90s.

We arrived mid-afternoon, having missed lunch, so we stopped at an Applebee's by the airport to try to feed the kids. Who didn't really eat. Next time, we should just get ice cream in the airport and have an early dinner. Ah well, live and learn. Except, the lessons I learn on one trip aren't really applicable to the next one, because the kids keep changing the rules on me. I think they call it "growing up."

Anyway, my plan was to go to the Rainforest Cafe on the Riverwalk for our first night's dinner- not because I love their food, but because I figured it would be a good transition into eating dinners out for Petunia. I don't know if we needed the transition, but the kids both really enjoyed their meals. We'd been to a Rainforest Cafe before, in Las Vegas, and Pumpkin found the fake thunderstorm scary. Even though the real thunderstorm that happened to hit Vegas that night was deemed cool. It was a good thing I had already given up trying to understand her, or that would have made my head explode. As it was, I just chalked it up to the fact that young children like to mess with their parents' minds and moved on. This time around, she loved the fake thunderstorm and kept asking when it would come again. That is probably due to that "growing up" thing again.

We did not go to San Antonio just to eat at the Rainforest Cafe, though. We could have done that in Orange County. We went to San Antonio to see the Alamo! Not really, but once we were there, we figured we should see it. 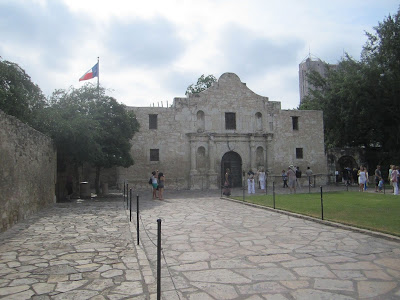 For the record, I failed miserably at explaining the significance of the Alamo to my 5 year old. I was talking about the trip at Pumpkin's soccer lesson last Friday, and one of the other dads was teasing his wife, who apparently visited the Alamo as an adult and still managed to be confused about the sides involved, which made me feel a little better.

We also strolled through the La Villita shopping area, but the shops there were more for me of 10 years ago. Also, they were setting up for some sort of festival, which was distracting. So we headed over to HemisFair park, to play on the playground. Which had, I kid you not, a disco ball. Here is the photographic evidence: 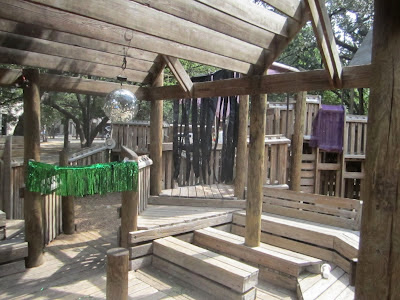 I'm 95% sure that ball was put up for the Luminaria festival, which was starting that night. But we didn't get to see it.

We did, however, get to see this charming little parade, right after our lunch at the Guadalajara Grill, in La Villita. 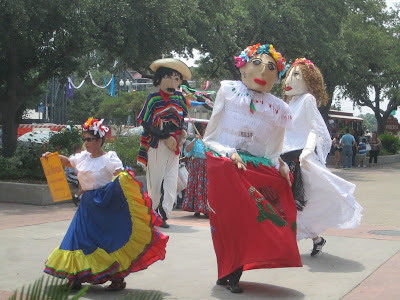 I have no idea what the parade signified, but Pumpkin thought it was cool. Petunia was a little freaked out by the super big people. It reminded me of the parade I saw as part of the Festes de la Merce in Barcelona. There were a lot more people at that parade, though!

After lunch, we headed back to the hotel for a nap, followed by a swim. And then we headed out again and took the trolley down to the Blue Star Arts Complex, for dinner at the Blue Star Brewing Company. The burger was great, the beer was fine... and the walk back along the river was really peaceful. Of course, mosquitoes were savagely biting my legs the whole time, but I was oblivious to that at the time, and just enjoyed the walk. We topped off the night with ice cream by the river. It was one of the best evenings of the trip.

The next day, we did a little shopping in the morning, procuring a pink cowboy hat with built in tiara for Pumpkin and a brown felt cowboy hat silhouette on a headband for Petunia. I wish I could show you pictures to demonstrate the extreme cuteness of that second item, which Petunia insisted on wearing for the rest of the day. People could not help but smile as we passed by. It was like we had our own little goodwill ambassador with us. She brought the hat out again in Austin, to similar effect. We might put it on her anytime we are taking her somewhere where she might annoy someone.

After we bought our ridiculous souvenirs, we took a cruise down the river on a river taxi. We had opted for a taxi ride instead of the tour because we thought the tour might be too long for the kids, and we weren't sure we could keep them quiet. But then we got confused and got on the wrong taxi and ended up cruising all the way up to the Pearl Brewery building, which meant that our ride was at least as long as the tour. Oops. Still, it was nice. And we got to see the art installations that are included on all the bridges in the "new" section of the Riverwalk. These fish were a hit with our girls. 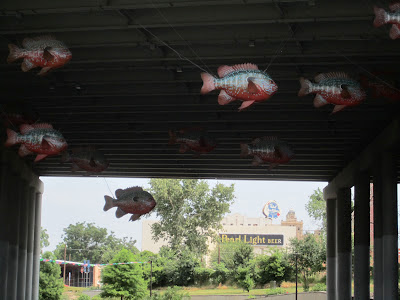 By the time we got off the river taxi, it was time for lunch. We had lunch at Rita's, near our hotel on the "main" part of Riverwalk. We liked the food- but we didn't really try for anything fancy, just steak and chicken fajitas to share. And yummy margaritas. 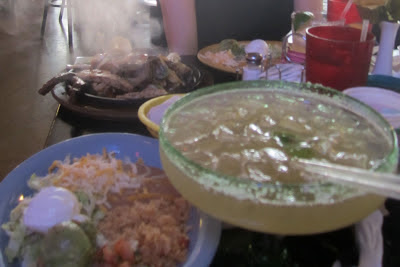 Hubby's was bigger, but mine (which you can't see) had the hand-shaken froth on the top, so I think I won. Rita's is also where we read about the south Texas tradition of the ice house, which was useful when we got to dinner that night. But I'm getting ahead of myself. First, we napped (or Petunia and Hubby did- Pumpkin and I indulged in one of her favorite vacation activities: watching the Disney channel. For some reason, she has not questioned us about why she never gets to watch shows like Austin and Ally at home).  After our sleep/Disney break, we headed out to Brackenridge Park to visit the Witte Museum. We spent the entire visit (about an hour) in the Science Treehouse, which was a huge hit with Pumpkin. It was Sunday, so they closed fairly early. Once they booted us out, we drove on to the Japanese Sunken Gardens, and as I mentioned in my awards show recap of the trip, that was a unexpected highlight for pretty much the entire family. The unusual construction of the main pavilion was cool. 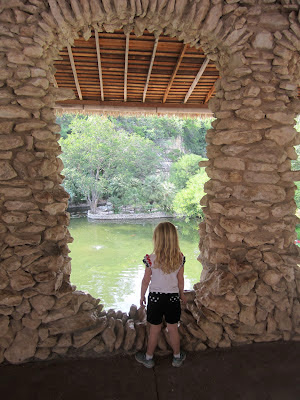 And the gardens themselves were very pretty, and almost irresistible to explore, even in the heat. 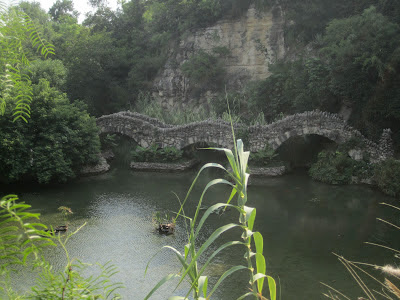 There were a lot of people taking graduation photos there, and we could understand why.

As I mentioned, we had dinner at an ice house. According to what I read (which, let's be honest, came from questionable sources such as restaurant menus), ice houses began as a way to keep milk cold- the standard delivery to the porch idea didn't work so well in the heat, I guess. And then someone had the bright idea of adding beer, and they became laid back gathering places for the whole neighborhood. The one we visited (The Friendly Spot) is apparently a "revival" one- i.e., not one of the original ones in San Antonio. But it was in a convenient location and it had a playground, so I'm not going to worry too much about historical authenticity. It had some decent bar food and beers, too.

After dinner, we went straight back to the hotel. We did some laundry, and packed up for the next day's drive to Houston. I wished we had one more day, just to hang out some more on the Riverwalk or try another one of the kid-friendly restaurants I'd picked out as options (there is one that has an outdoor play area and a laundromat!) but I suppose it is better to feel we left a little too soon than a little too late, so I consider it a successful stay.
Posted by Cloud at 10:26 PM