A Tale of Two Weekends

I intend to finish posting trip stories about our Texas vacation, for myself and the three or four other people who like those sorts of posts. But first, I have to tell you about two recent weekends, both of which involved me untethering from the network.

Weekend #1: I turned 40. To celebrate, my husband and I took two whole nights away from our (delightful, adorable, but energy-sucking) children, courtesy of my parents. We drove up to Newport Beach. The location was picked via a link @Calee sent to me after my crowdsourcing my travel plans post. We stayed at the Hyatt Regency. We had a bit of a rough start to our weekend, as there were three or four weddings being held at the hotel or nearby, and all the guests were trying to check in just as we arrived.  We had to wait for our room- luckily, the bar was fairly nice. However, the lobby was frankly not up to that level of chaos, and I was frankly not up to the required level of "being happy for others" as once I was called to come collect our room keys, I lost my place in line three times to a swarm of happy relatives all kissing the cheeks of the one relative standing in line to the left of me. To the woman who was offended by my exasperation: I'm sorry. My reaction had nothing to do with your ancestry (Middle Eastern? Armenian? I didn't know and only noticed after you got offended.) It had everything to do with the fact that I was tired of waiting for my room and desperately wanted to start my short and infrequent romantic weekend away with my husband. Also, I respond poorly to people who disrupt queues. Ask the people of Rome, if you want verification on that.
Anyway. We did eventually get into our room, and get settled in and changed for dinner. We walked to dinner at 3 Thirty 3, which satisfied my requirement of providing drinks (and dinner!) with a nice view.
The next day, we had a leisurely and large breakfast at The Back Bay Bistro, which is truly right on the water- and just across a parking lot from our hotel. Then we changed into our water gear and headed across the parking lot again and around to a kayak rental place. We paddled out through the bay and up the estuary. As we paddled out past the moored boats, we indulged in a favorite kayaking activity of ours- checking out the puns in the boat names. Our favorite from this paddle was "floating point"- in Courier font, of course. Hubby spotted it first, and laughed, saying "spot the boat owned by a geek."

Once we got into the estuary, motorized boats were banned, and it was a wonderfully peaceful paddle. There were lots of birds to watch, and also quite a few jumping fish. We had decided to go out for a paddle for old times' sake- we used to kayak quite a bit before we had kids. The beauty of the paddle was a nice bonus.

We'd had such a large and late breakfast that we weren't really hungry for a big lunch, so after we cleaned up, we decided to just walk over to Balboa Island and have a couple of Balboa Bars for lunch. Last time I had one, it had been built up to be an amazing treat, and I was disappointed. This time I went in with realistic expectations, and was very happy with my yummy ice cream bar.

We strolled around Balboa Island a bit, and bought some "surprises" for our kids. Then we headed back to the mainland and the margaritas with a view that I wanted for my birthday. We ended up at Sol, a Mexican restaurant that is right next door to the place we'd had dinner the night before. Because of the "old Mexico" styling of the restaurant, the view wasn't as good as the night before, but that stopped mattering after a very large, very good margarita! The chips and salsa were good, too. So I was happy.

We had dinner over on Balboa Island, and ended the day with a soak in the hot tub. We had another late and leisurely breakfast the next morning (at Plum's Cafe- I can't believe we used to think there were no good breakfast places in the OC!), and then we headed south on the Coast Highway, towards home. We stopped for a light lunchtime snack and a beer at the bar that overlooks Doheny State Beach. Sitting there, it occurred to me that this spot better fit what I had said I'd wanted for my birthday- that bar has an amazing view. You sit on the patio or in one of the window tables, and look out across the coast road and the train tracks to a beautiful beach. We've driven along that stretch of road many times, and even stopped in at the bar in an earlier incarnation as a British pub once or twice. But I'd forgotten about it. Maybe next time!

We got home to a house that had been decorated for my 40th birthday party, which was great. 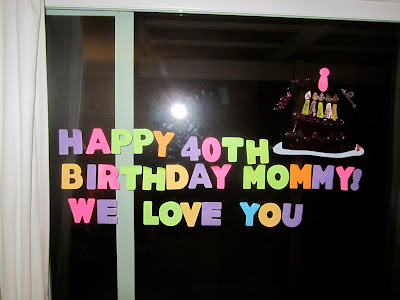 All in all, a great birthday weekend.

Weekend #2: We took the kids on their first camping trip. The parents of one of Pumpkin's day care friends organized a big group of us to go camping at Dos Picos Park, near Ramona. This is a great campground if you have kids. If you don't have kids... well, you'd better like kids. They run all over the place, riding bikes and scooters around the loop road, chasing each other and laughing. There were at least two other large groups of kids there. None of them were obnoxious, but if you had booked into the campground hoping to commune with nature, you were going to be disappointed. Of course, if you booked into a campground this close to civilization hoping to commune with nature, you're a bit insane.

Anyway, Pumpkin and Petunia both loved camping. Hubby and I had fun, too, although I was very grumpy Friday night when I discovered that Hubby (who was in charge of this trip, since I'd organized almost all of our Texas vacation) had not brought pillows. I can see making do with a rolled up sweatshirt if you're backpacking. But we were car camping. We should have brought pillows. On Saturday, I drove into Ramona and bought two pillows at the Kmart. And I slept much better for it.

Other than that, it was fun. They had all sorts of activities for the kids- a nature talk (which I missed due to the need to go buy pillows), a bat hike (which I skipped out of because Petunia was tired and needed to go to bed), crafts time...

Once I relaxed into the spirit of the place, it was great to let Pumpkin run around on her own with her friends, secure in the knowledge that she was always within sight of one of the parents in the group. Petunia needed a little more supervision, but she was also doted upon by many of the parents who do not have a second kid and therefore miss the toddler phase. To be fair, she is almost criminally cute right now, with her big eyes, cute dimples, and almost there toddler speech patterns. On the first night, she and Hubby roasted marshmallows while the adults sat around drinking their adult beverage of choice and chatting and the bigger kids watched a show in someone's RV (yeah, whatever- we can worry about instilling the proper camping ethic later). Petunia passed out marshmallows to all the grown ups, and charmed everyone. During the day, she conned shoulder rides from several Daddies, who all swore they were happy to do it. I didn't quiz them too hard, though, because she is heavy and Hubby kept disappearing whenever a hike was starting, and my arms were getting tired!

Pumpkin, meantime, spent as much time as she could on a borrowed Razor scooter. She had a blast, and desperately wants one of her own. We may oblige, with a rule that the scooter only gets used at the park until she gets good at braking.

So all and all, a fun weekend. But an exhausting one. If I'm honest, I preferred weekend #1... but only because I know that I can have a weekend like weekend #2 whenever I want it.
Posted by Cloud at 10:13 PM