Back when we were in the early planning stages of our Big Texas Trip, we considered visiting the cities in different orders. I had initially thought we would fly into or out of Houston, just to decrease the amount of driving a little bit. But then I did some searching for flights and cars, and I discovered we could save a non-trivial amount of money by visiting the cities in the order in which we did. And then Hubby discovered that if we drove from San Antonio to Houston we could drive through Shiner, and the decision was made.

For those not in the know, Shiner is the home to the Spoetzel Brewery, which makes (among other beers) Shiner Bock, an entirely drinkable beer that a friend of Hubby's had introduced him to not long after he arrived in San Diego. The fact that this particular friend was originally from India, not Texas, and didn't actually like beer much just adds a touch of the surreal to the story.

And so, when it came time to head for Houston from San Antonio, we only took I-10 as far as Seguin. We stopped for a snack and some playtime at a park in Seguin, and then headed to Gonzales for lunch. Our guidebook promised us that its courthouse was pretty. It was. But it was hot and my mosquito bites itched and we weren't in the mood to stop and take a picture, so you'll just have to take my word for that.

We had an immensely successful if uninspiring lunch at a Pizza Hut- the girls were delighted to get pizza, and ate really well. And then we drove on to Shiner.

Shiner is a really small town, and yet it still took us several tries to find the brewery. We kept turning around near a pretty church with a large steeple. Petunia kept asking to stop there, whether due to the fact that she was tied of her car seat, the fact that the building looked interesting, or some innate religiosity, I do not know. Regardless, being the heathens that we are, we pressed on and found the brewery. 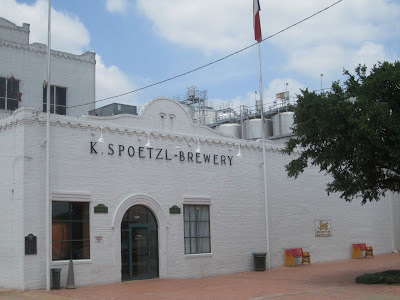 We had originally intended just to get some tasters and maybe buy some souvenirs, but we got convinced to go on the tour as well. It was not too long and reasonably interesting for everyone except Petunia, who passed the time by winning over all the older women on the tour with her big eyes and irresistible dimples.

And then we loaded everyone back into the car and drove to Houston. Our trusty GPS had its worse fail of the trip, as it directed us onto a toll road that accepted only EZ Pass. Luckily, we figured this out quickly and drove only one exit before getting off the toll road. No ticket has yet arrived in the mail. And we still managed to make it to our hotel in reasonable time. So all and all, not a bad day's drive.
Posted by Cloud at 9:25 PM