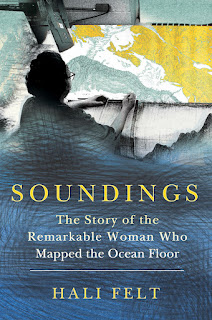 Awhile back, I was contacted by someone working publicity for Soundings

, a book about Marie Tharp, the scientist who had mapped the ocean floor and discovered the Mid-Atlantic Ridge. The book met my requirements for agreeing to accept a copy for review- namely, it sounded like something I'd like to read- so I checked that they were OK with my review policy and then accepted the advance review copy to read.

Regular readers might remember my earlier review of The Discovery of Jeanne Baret and think that I risk developing a bit of a niche in book reviews: forgotten female scientists. They'd be right, but it is a risk I don't mind taking. As niches go, it isn't bad. (For the record, I enjoy reading books about a lot of different subjects and would, in general, agree to review any book that sounded interesting if I had the time to do it.)

But anyway... back to Soundings. I really liked this book! Hali Felt does a great job of bringing Marie Tharp and the other main characters in the book to life, and I liked how she wove in descriptions of geoscience and its progress during Tharp's life. It is a very engaging book. Felt writes fluidly, and has a talent for descriptions that are vivid without being overbearing. The book is written in a style that recalls a novel, in which Felt fills in details from her imagination where the primary sources are lacking. At the beginning of the book, she compares this to the interpolating and extrapolating that Tharp and her colleagues used to create their maps in the face of incomplete data, and that is a compelling comparison.

However, the downside of this narrative style is that it can be hard for the reader to get a firm footing, and evaluate what is known and what is hypothesized. At the end of the book, there is a note that explains the "imagined" scenes are in the present tense, whereas the solid history is in the past tense. Perhaps this should have been obvious to me while I was reading, but it was not, and at times I was distracted by my desire to ground myself in a knowledge of what was real and what was extrapolated. I wish the note had been put at the front of the book.

My other quibble with the book is the fact that there are no pictures. Felt does an excellent job of describing both Tharp and her maps, but I kept wondering why she didn't include a few pictures. Perhaps she wanted to focus on the written word and not distract the reader with pictures, but I found the lack of pictures more distracting. (A little Googling solved my problems, though- there are a few pictures of Marie Tharp and her maps available online.)

I could not stop myself from comparing this book to The Discovery of Jeanne Baret. Soundings dances far more lightly over the clearly extensive research the author did, putting most discussion of sources and other notes at the end, with no anchor in the main text. In The Discovery of Jeanne Baret, not only the sources, but also the lines of reasoning that led to the author's conclusions are detailed in the main text. This difference probably derives from the fact that Felt holds a Masters of Fine Arts and teaches writing and Glynis Ridley (the author of The Discovery of Jeanne Baret) holds a PhD and teaches English. Where Felt focuses on the story, Ridley focuses more on the scholarship and her discoveries and reinterpretations of history. Neither approach is better than the other, and I enjoyed both books. The lighter approach probably makes Soundings the more generally accessible book, though.

Although the two books are quite different, there is a thread that connects them. It is the same thread assigns them to my putative book review niche: both books are about extraordinary women who ignored the role they were assigned by their society, and found a way to participate in- and make significant contributions to- science. Both Jeanne Baret and Marie Tharp had to make sacrifices and compromises to live the life they wanted. Both had to essentially ride the coattails of a man to gain admission into the world they wanted to inhabit.

Since I was finishing up Soundings at the time that the Marissa Mayer story was all over my blog reader, I was struck by the difference in the response women have to stories like Tharp's and the discussion that was raging about Mayer. It seems to me that we have a much easier time forgiving women in the past for the compromises they had to make to work in science than we have forgiving other women living in our own time for the compromises they make in order to have access to the professional life they want. We do this even though we know, from the evidence of our own lives, that sexism is alive and well, and that the unspoken rules that govern most professions are still written by men. Women in science and technology have come a long way since Tharp's time, but we have not reached a point where we can reasonably expect to just stride into careers in male-dominated fields without having to adjust ourselves to the rules the men have in place. We have broken down barriers, but the wreckage of those barriers still remains and can be treacherous.

We should read books like Soundings and be inspired by what women like Tharp achieved in the face of huge obstacles, for sure. But I think we should also read them and be reminded of the fact that the women who broke through barriers and the women who are still breaking through barriers are people and not just role models. Hali Felt does a terrific job of portraying Marie Tharp as a person as well as a scientist, with quirks and faults as well as strengths. We are all a mix of strengths and weaknesses. We will never find our perfect feminist heroine, who never compromises to the patriarchal society in which she lives and works. But by rescuing Marie Tharp from obscurity, Felt has given us another imperfect heroine, who can perhaps remind us that we don't have to be perfect to accomplish great things.
Posted by Cloud at 10:10 PM