Show Us Your Bookcases!

Apparently there is a meme or meme-like thing going on in the academic blogging world around taking a picture of your bookcase(s) and posting it on your blog. I saw it at Nicoleandmaggie's blog, and was persuaded to join in. (OK, I admit it, it took one question and I agreed to do it... It sounded like fun!)

There are two main bookcases for the grown ups in my house. Each child also has a bookcase in her room, and there is a shelf of kids' books in the living room, too. I have had to prune back books rather aggresively since having kids. We just don't have enough space for everything. I have also started buying my books almost exclusively in electronic format. I have discovered that I actually prefer reading on the Kindle. It is easier to carry with me. It is light enough to hold in one hand, no matter how long the book is. And I can make highlights guilt free (I'm the daughter of a librarian, and have a very hard time writing in a book!) and easily find those highlights later. As a bonus, I also don't have to figure out how to store the physical book.

Here is the bookcase in the living room. 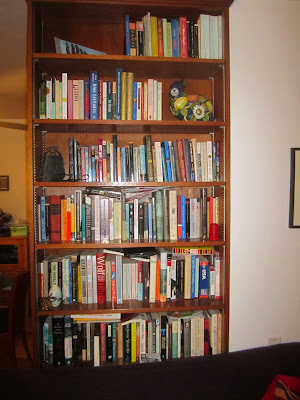 The bottom four shelves are fiction. Those are a mix of mine and Mr. Snarky's, but since Mr. Snarky had to ship his possessions over in a shipping container when he moved here, my books far outnumber his.  The top shelf holds my philosophy books from college- yes, I've read at least a portion of each of those, plus some more that were in a box that was lost in transit between college and graduate school. I took Philosophical Perspectives for my humanities sequence and Classics of Social and Political Thought for my social sciences sequence. I then decided I wanted some different reading and switched to Near Eastern Civilizations for my history sequence, which means I've read large portions of the Koran and the Bible as well as Zoroastrian texts (stored elsewhere, next to my copy of the The Tao of Pooh

Anyway, back to the bookcase. The second shelf from the top is biographies and memoirs. I have a weakness for memoirs.

There are two more shelves that you can't see in this picture, because they are covered by the sofa- we needed more floor space for train tracks, so we shoved the sofa back at some point and decided to leave it there. Those store our travel guidebooks and infrequently used cookbooks.

And here are my bookshelves in the office: 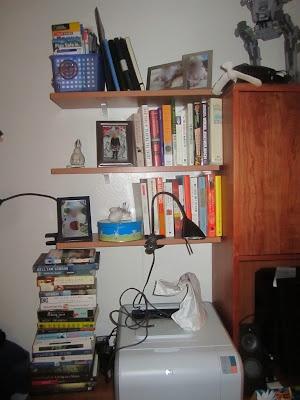 here for some reason. (If you haven't read that one, you should. It is every bit as good as you've heard.) The books on the very top shelf are my journals from our big "circle Pacific" trip, which I am so very glad I wrote. I occasionally get one down and reread a section, and I love how that brings back the good memories from that trip.

The stack by the printer is my physical "to read" stack, consisting mostly of gifts and things Mr. Snarky bought and thinks I should read. Actually, he tries to put every book he reads there, but I periodically give him a stack of rejects and tell him to figure out what to do with them himself- I don't want them.

In other book-related news, The Zebra Said Shhh

now has FOUR five-star reviews (and one three-star review) on Amazon. I'm pretty happy about that, and very happy that people seem to be liking my book. And I'll leave it there before I start a Sally Field-esque gush.

Leave me comments about your bookcases- or links to your own pictures!
Posted by Cloud at 9:46 PM