In many ways, the entire reason we took our family vacation in New Zealand this year was to go to Wellington. Mr. Snarky and I both really like Auckland, and were glad to have the chance to visit some friends there. We had fun showing the girls Taupo. But the purpose of the trip was really to see my in laws in Wellington.

The day we drove to Wellington was the rainiest day of our trip. This made it hard to burn off steam at a playground after our lunch. We made up for that by stopping for afternoon snack at a great seaside playground in Paraparaumu, with several cool toys for the kids, including a huge climbing tower that Mr. Snarky also enjoyed.

I loved the view down to the beach through the flax- quintessential New Zealand.


After we left the playground, it was only another hour or so to my in law's house in the Seatoun section of Wellington. We had a nice evening starting the process of catching up with my husband's family, but we were all pretty tired, so we went to bed early. Which means we woke up early- or at least the kids did, and they woke me and Mr. Snarky up, too. At least we got to see a beautiful sunrise. 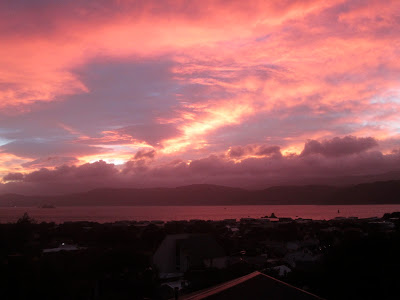 Mr. Snarky took the picture from his parent's back garden. The view was just as good from their dining room and living room. They have a beautiful view.

Our first day in Wellington was chilly, but sunny and not terribly windy, so we headed out for some sightseeing. We found lunch at a mall food court, which allowed the kids to eat cheese scones while the grown ups tried more interesting things, and then we rode the cable car up to the Botanic Gardens. Wellington is an extremely hilly town, so there is a cable car that runs from the main business district up through the university to the Gardens. We thought the kids might enjoy the cable car, and we were right. But they really loved the playground at the Botanic Gardens. I talked about this playground in my "awards show" post on the trip, so I won't describe it again. I'll just show you the view from the cable car stop, which is pretty awesome. 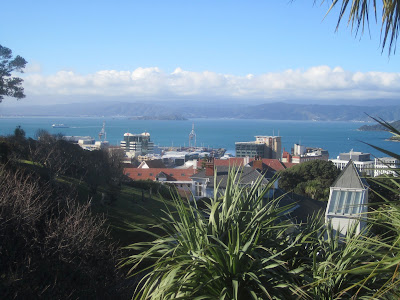 After the outing to the park, we rested at my in law's house for awhile, and then decided to go for a stroll along the beach. The wind had picked up, so it was more of a determined march than a stroll, but the kids enjoyed looking for sea shells- the big storm that blew through the week before we came had left a bunch on the beach. Pumpkin also liked the jetty, which reminded her of the jetty in The Fierce Little Woman and the Wicked Pirate,

a book by Joy Cowley that my in laws gave her a couple of years ago.

The next day was even windier, so we made our outing an indoor one, and headed to Te Papa, the national museum of New Zealand. The kids were mostly interested in the play areas, but there were several of those interspersed among the exhibits, and we had enough adults along that we could take turns nipping out to look at other things. If you are ever in Wellington, be sure to stop by Te Papa. Like most museums in New Zealand it is free (donations are welcome), and it has a lot of cool things to see, including a giant animatronic baby made by Weta Studios (the folks responsible for The Lord of the Rings).

We saw and did a lot more things in Wellington, but this post is long enough, so I'll pick up the story in a later post.
Posted by Cloud at 9:58 PM