The Last Weekend of Summer. Or Not.

Today was the first day of school. It was also the day after Labor Day, so that's two indicators that summer is over.

Except, of course, that here in San Diego, September is one of the nicest months. We will almost certainly continue to do summery things, like going to the beach and eating our dinners outside, for at least another month, possibly two. Dinners outside are actually more likely this month, because with Pumpkin at school instead of her summer day camp, my pick up routine is shorter and I'll have more time to set up the outside table.

Still, the long Labor Day weekend felt like a dividing line between "real" summer and San Diego's bonus summer. We didn't really plan it ahead of time, but when Mr. Snarky and I sat down with our beers on Friday night, we realized we had a pretty great plan for a last weekend of summer. We had two parties to go to- a "back to school" pool party hosted by one of Pumpkin's friends and a birthday party for one of Petunia's friends. They fell on Sunday and Monday, so we had Saturday free.

I'd taken Pumpkin back to school shopping the previous weekend. I am not sure whether Petunia was more jealous of the new clothes or the solo time with Mommy, but she was definitely jealous, so I promised I'd take her out shopping this weekend. Luckily, she isn't quite old enough to realize the difference between a trip to Target and the trip to the mall Pumpkin got, and she was thrilled to head to Target with me Saturday morning. We had a special snack of pretzel and Cheetos, and then grabbed a cart and had a surprisingly pleasant time tooling around the store, picking up the items on our list.

Petunia needed new shoes- she has a lot of hand me down clothes in great shape, but the shoes didn't fare so well- so we headed to the shoe aisle and picked out some practical tennis shoes and black mary janes. And then I caved to big, pleading eyes and added these to the cart, too. 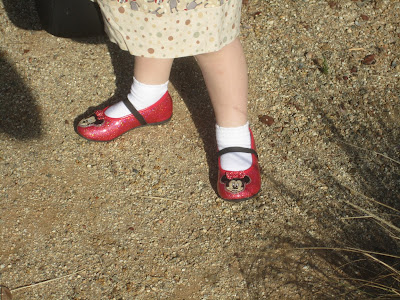 She also convinced me to buy her a new pair of boots. I'd bought her a pair of pseudo-cowboy boots (also at Target) last winter, and she loved them. She wore them a lot, including with her sundresses as the weather got warm. But they are too small, and the sole is coming off one of them, so she can't wear them now. As we stood in the shoe aisle, looking for the black mary janes, she spotted some new pseudo-cowboy boots and I decided that if she is going to mostly wear hand me down clothes, she should get to pick her own shoes.

I did, however, prevent her from wearing her new boots this weekend, claiming that I need to waterproof them before she wears them. This is not strictly true, but we're in the midst of what passes for a heat wave here- coastal highs are in the low 80s, and there is noticeable humidity- and thinking of her wearing boots around made me feel hot and cranky, so I just couldn't let her do it.

Mr. Snarky wilts a bit in the heat, so we decided to spend Saturday afternoon somewhere with air conditioning and headed down to Balboa Park to go to The Natural History Museum. As a bonus, this was on our 2013 Family Fun list- Pumpkin loves the NAT, which she calls "the dinosaur museum." They currently have an animatronic dinosaur exhibit that both kids thought was great.

After the museum closed, we took a quick spin on the nearby carousel, and then headed over to my sister's (air conditioned) condo for dinner.


It sounds like we had a packed weekend, but it didn't feel that way. I slept in two of the three days. Mr. Snarky and I sat in our backyard and chatted over drinks two of the three nights. The kids and I spent Sunday morning doing art projects in the backyard while Mr. Snarky laid new sod in a spot in our backyard that used to hold a shed (we bought a new, smaller shed, that fits in a less obtrusive spot). If you think that sounds like a wildly unfair distribution of labor, you have clearly never done art projects with two headstrong children. Or perhaps you are just good at art projects. I am not, and Mr. Snarky took one look at me when he finished with the grass and offered to make lunch.

I also had time to work on my project, albeit it time in a fairly noisy environment, working at the dining room table while the kids played in the living room. Still, I made some great progress- I think I am to the point where I should pick a target "release date" (really, just a date on which to plan to tell you all about it and provide a link to it), but I can't quite bring myself to do that yet. Still, I am gathering momentum, and finding myself choosing the project over other leisure time activities more and more these days. Posting may be light here because of this.

Or maybe it won't. Maybe this weekend was the harbinger of a new phase, in which the kids are old enough that I can work on things while they play and things feel just a little bit easier, until I get used to the small increment in my dose of freedom, and start feeling restless for even more.
Posted by Cloud at 10:20 PM