On our third full day in Colorado, we checked out of our hotel room in Denver, got in our lovely rental car, started it... and stared in disbelief at the "Check Engine" light.

So our drive from Denver to Glenwood Springs started roughly one hour later than expected. This sadly doomed my original plan of detouring to Breckenridge for lunch and a mine tour, but luckily I had a back up plan in my trip planning document, so we recovered well.

Our first stop on our way out of Denver was the Colorado Railroad Museum in Golden. If you have any train fanciers in your family, I recommend it highly- there were quite a few actual rail cars to explore, and Petunia (our little train fancier) thought it was awesome. So awesome that she decided to spend some of the money my parents had sent her for her trip at their gift shop. I said we'd pay half (but only half) of whatever she wanted to buy, which nixed the giant train sets she had her eye on. She eventually settled on a stuffed dog in a hat with the museum logo on it. She named him Dog Dog.

Pumpkin liked the train cars, too, but she really loved the model railroad. She and I spent ages watching them model trains while Mr. Snarky and Petunia explored the rail cars.

We didn't leave the train museum until after 11, so there was no way we were going to make it to Breckenridge for lunch. We decided to stop at Idaho Springs, instead. It was a nice little town, and we had a pleasant lunch at the Tommyknocker Brew Pub. After lunch, we headed to the Argo Mine and Mill. It is a site with an interesting history. The mill was built to process ore coming from mines that were drained by the Argo Tunnel. Whatever I knew about the history of mining in the US from my classes in school has long since melted into the mists of time... so it was interesting to learn about how mining was done, and about the construction of the tunnel.

The kids tolerated all of that, and the walk through the mill, but for them the highlight was panning for gold.

Note the glasses hooked on Mr. Snarky's t-shirt. This is the last sighting of them. The dropped off during the panning, and he didn't realize they were gone until we stopped at a viewpoint on our drive West. He called back to the mine, but although the glasses had been found, they'd been stepped on and rendered useless. So for the rest of the trip, I had to do any driving after dark. During the day, he could wear his prescription sunglasses. (His vision isn't all that bad, so the only downsides of losing his glasses were the driving issue and the fact that I had to read out the beer lists posted in brew pubs.)

I would also like to note that I spent the entire trip lugging around a truly ginormous purse (bought to provide room for carrying snacks and coloring supplies), and could easily have fit his tiny little glasses into my purse, if asked to do so.

Anyhow, here is the view from the viewpoint where we discovered the glasses were gone: 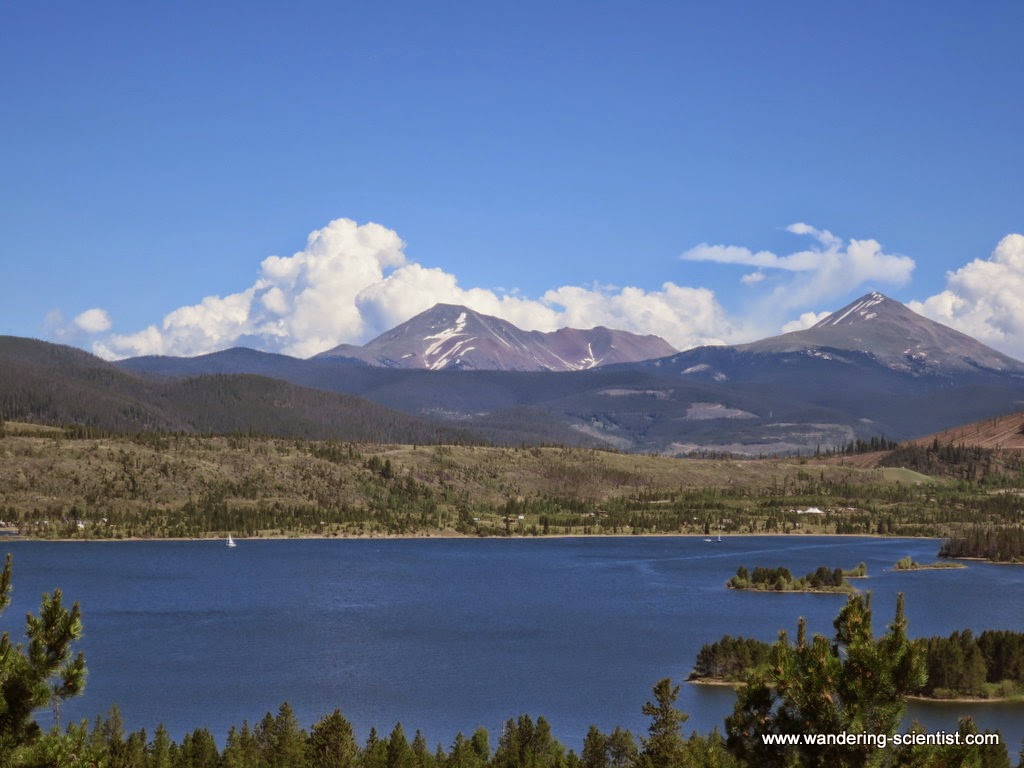 I can't remember exactly where this was. It was before we got to Vail, where we took our afternoon break. The kids played on the wonderful Pirate Ship Playground that I mentioned in the awards show post, and then we had a drink and a snack at Mexican restaurant at the base of the chair lift.

After our stop in Vail, we drove straight through to Glenwood Springs. The drive through Glenwood Canyon was beautiful, but I did not get any good pictures of it. I am not a particularly good "out the car window" photographer. I'd say no one is, but Mr. Snarky actually manages to get some nice pictures that way. I have no idea how.

We were delighted by our hotel when we arrived in Glenwood Springs... but that is for the next trip story, all about Glenwood Springs itself.
Posted by Cloud at 10:00 PM