Weekend Reading: The I'm Not Going to Talk about That Shirt Edition

I have spent the last couple of hours working on setting up my development environment so that I can try my hand at app development, and I am well and truly blocked. So I think it is time to look away for awhile and do something else. Like write my weekend reading post!

My links are completely lacking in theme this week, so I won't try to pretend otherwise. Pretty much the only theme is I'm not going to talk about that damn shirt. If you wonder what shirt I mean, search Twitter for #ShirtStorm. I just don't have the energy to really engage with that level of cluelessness, either in the wearing of the shirt or in the over the top response to the initially fairly lighthearted critiques of the shirt.

So, what will I talk about? LOTS of things.

First of all, Petunia, the Girl Who Was NOT a Princess is featured in Laura Vanderkam's latest newsletter.

Here's a nice post from Kristina Halvorson on (not) doing it all and being yourself.

Andie from Blue Milk wrote a nice article about (among other things) the way caring work gets hidden from view and the costs associated with that.

Now that I'm not just a working mom but an entrepreneur mom, I find myself paying more attention to stories about being a mom and an entrepreneur. There were two in my Twitter feed this week, and they both strike me as fairly honest reports of what it is like to be leading a venture-backed start up as a mom.  Jeni Axline is a cofounder of Parenthoods, and Kristy Sammis is a cofounder of the Clever Girls social media agency.

Both of their articles are worth your time. Neither of them describe anything like what my current life looks like. There are a lot of possible reasons for that. I'm just now really starting to push on the non-contracting part of my company, after all, and I can't really tell yet what kind of work schedule I'll end up with as I start to try to make my Big Ideas happen. But I suspect on of the big reasons for the difference is that I'm not trying to be a venture capital-backed entrepreneur. When you bring in venture capital, you sign on to a different sort of timeline. This is not necessarily because it HAS to be that way, but because the venture capitalists MAKE it that way. They have timelines on which they want their investments to pay out, and that creates time pressure that may or may not need to be there for other business reasons.

I've chosen a less hectic approach. Only time will tell if my way works, too.

Mr. Snarky sent me a link to a pretty decent post about how if you want to follow your dreams, you have to not pursue other things. It has some good points, but I think it suffers from the common problem of taking what works for the author and over-generalizing. Sure, you need to focus. But I don't think there is some natural law that says you have to focus on only one thing. I prefer a different approach, to spread my financial risk around a bit so that I can have time to play a longer game on some of my goals.

Again, only time will tell if my way works, too. If it does, I'll have to come up with some cute illustrations for my approach and try to market it as The One True Way. Or not.

I cannot decribe how much I love this quote from Anne Lamott. So much that I'm not going to try to summarize it, and will just tell you to go read the whole thing.

Women in tech: Cindy Alvarez is collecting stories about the nice things people said or did that made you stay. I'm sure I have some of these, but I can't come up with any, and that is making me a bit sad.

Speaking about things that make you want to stay in tech... or actually, about their exact polar opposite: It turns out Twitter can silence the trolls if it wants to. Of course, there are worries about Twitter using this capability to impinge on free speech. And you know what? I actually sort of agree. Not that there is any right to say vile and threatening things to people on the internet, but that the decisions about what constitutes protected speech don't really belong with the tech companies. It would be far, far better, in my opinion, if we simply enforced the laws we already have against threatening people. But we don't do that. I think this snippet is very telling:

"Last week, Wu put up $11,000 as a reward for information leading to the identification of a perpetrator. Since then the threats have nearly stopped.

Wu says the proliferation of online threats and harassment will continue unless people think there are consequences and there is a real likelihood of getting caught."

On a happier note... sort of: here is an article from Ashoka Mukpo about getting and surviving Ebola. I started following him on Twitter when he started tweeting again during his recovery. He is trying very hard to get people to focus on the suffering this disease is bringing to the people in West Africa.

On a definitely happier note: check out this interview with a guy who designed a font to help dyslexics read more easily. Also check out his font: dyslexie.

And of course, we have to end with some fun.

I think this may be my next hoodie.

Mr. Snarky sent me this picture: 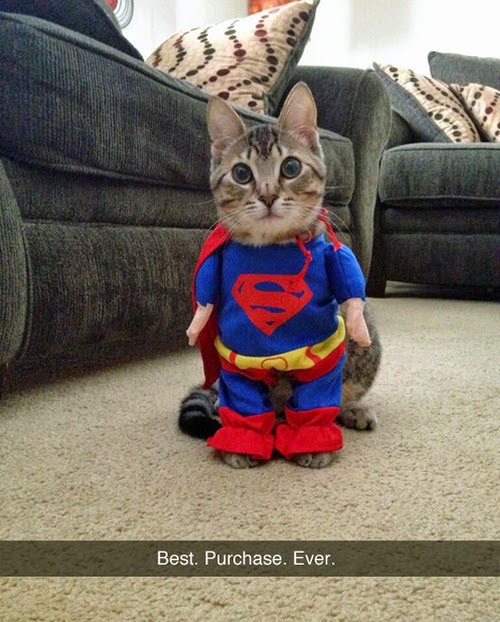 I went searching for the source, and it showed up on a bunch of tumblrs, never really well attributed. Here's one possible source. But, go do a Google image search for "tumblr cat in superman costume" and enjoy what you find. You're welcome.
Posted by Cloud at 4:33 PM