How about some good old fashioned show and tell? I've been threatening to post some pictures for a long time, so those can be the "show" part of the post.

Here is the new fishy pet and his snail buddies: 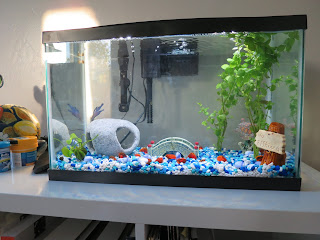 He was not cooperating for the camera, but I finally got a closeup of him next to the smaller snail: 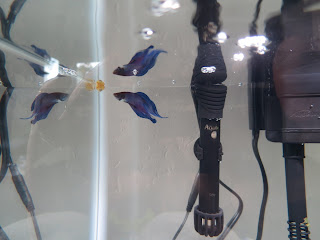 The snails gave me a scare this weekend by ceasing all movement for roughly a day. The internet told me that the way to tell if they were actually dead was to scoop them out and smell them, which I did with much trepedation since the internet also informed me that dead snails smell really, really bad. They didn't smell like anything, which was good news.

Since I was taking pictures, I also took some of the office, but then I realized that there are a gazillion pictures of my kids up on all the shelves I took pictures of, and I can't be bothered going in and smudging out all the faces tonight. So those will have to wait.

I will show you my crocheting progress, though. 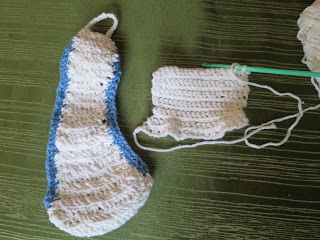 My first attempt is on the left, and it clearly shows my trouble with dropping stitches. It makes a passable Elsa doll cape, though. My current project is on the right. As you can see at the bottom, I was still struggling with dropping stitches, but I think I've got that sorted now. Also, I have figured out how to do a proper single crochet, as opposed to whatever weird made up stitch I was doing on the Elsa cape. I still struggle with turns, but my Mom (who is also learning to crochet right now) passed on some advice from a friend of hers, and maybe I've got that figured out, too. A few more rows and I should be able to tell.

Speaking of tell, let's move on to the "tell" part of the post.

I'm in the formatting phase of my next taster flight book. It is called Love and Other Happy Endings, and has stories by Katherine Mansfield, L.M. Montgomery (I really like a lot of her short stories!), Wilkie Collins, F. Scott Fitzgerald, and James Oliver Curwood. I'll be looking for advance readers soon. I don't have the final cover yet. Once I get it, I'll put up the official web page and post the form for advance readers to sign up.

I am also working on another original book. This one is about Indian film and is called Don't Call It Bollywood. I really enjoyed reading it and learned a lot about Indian film, admittedly from a very low starting point. I would really like to find an editor for this book who is familiar with Indian film, since I am not. It would be awesome if the editor spoke enough Hindi to check some translations, too, but I can also find someone else to do that. If that sounds like someone you know, please point them to me! They can email me at wandsci at gmail dot com. This is obviously a paid gig.

Finally, I've decided to take the time management workshop I gave a couple of weeks ago and shorten it into a one hour seminar that I can give online. If that sounds interesting/useful to you, you can sign up for the Management Monthly newsletter to make sure you get the announcement. Or you can watch this space for the next couple of weeks, because I'll probably post a link to the sign up page at least once.

From all of that, you might think that I am experiencing no doubts at all about my career choices. That would be wrong. My main contract has asked me to frontload the hours I have for this year, so I suspect I'll be finished with it sometime in summer rather than late fall, as I originally thought. This makes no difference in terms of my total income for the year, but I find it does make me think harder about how I should be spending the time that is not yet under contract. I have a plan... but I am questioning it a bit. If I weren't the one who has to work through the questions, I'd be fascinating by how the change in the scheduling of the same number of hours has changed my thinking.

I think some of the questions are also prompted by the fact that Mr. Snarky started a new job a few weeks ago, and is really loving it. He is in the phase where everything is great and cool, and he's super energized by what his team is doing and what the company is doing... and I look at that and I'm a little wistful for that feeling of being part of a team working towards a big, audacious goal.

And yet, when I think about the things that energize me right now, and that I enjoy working on the most, I keep coming back to the plan I have. I love giving the seminars and workshops. I love building books. I had a new idea for a book project this weekend that I'm really excited about. I think I'm doing the right thing, but things are uncertain enough that I can get distracted by doubts.

So here's what I'm going to do. I'm going to spend some time thinking about my own big, audacious goals. I have them, but I've let them get fuzzy and obscured by the day to day concerns. I'm also going to work a little harder to build a work community. I can't have a team yet, but I can have a community. I have the beginnings of one, and I think I should connect with it more.

I also need to face down my fear of self-promotion. I love doing workshops and seminars, but that won't pay the bills unless I figure out how to promote them. Some of what is holding me back is that I need to find a method of promotion that feels authentic to me. But some of what is holding me back is fear. I'm still sorting through what, exactly, I'm afraid of. I think it is a mix of fear of failure and fear of annoying people. I have to ask myself whether I want to let that fear get in the way of what I want to achieve. OK, I already know the answer to that. So I just have to figure out how to ignore the fear and do it anyway.

So, that's what's up here. What's up with you? Share your own show and tell (or talk about mine) in the comments!
Posted by Cloud at 10:24 PM