I don't want to write about politics right now. I can't promise not to write anything more about politics until after the election, but I can promise I probably won't write much about politics. I don't think I have anything particularly insightful to say, and at this point, we probably already all know what we plan to do in the ballot booth, and in the time until election day.

So, let's talk about other things! For instance, I decided to tweak the design of this blog. I'd like to migrate to WordPress someday, but that would take more time than I want to invest right now, so I settled for decluttering a bit. If there's something that you really liked that has gone missing, let me know. Otherwise, enjoy the less crowded layout.

I realized as I made this dish last Tuesday (Tuesday night is pasta night....) that I had never posted the recipe. It is one I invented. I was trying to make a cheese-free pasta, although I'm not really sure why. So, this recipe doesn't call for any cheese. If you want to sprinkle some on, I guess a cotija would be most appropriate, but I tried some of the pseudo-cheese in a green can that my kids like and honestly, that was pretty good.

So, anyway, here's the recipe for Tequila Pasta:

Cook the pasta. While the water's coming to a boil and the pasta is cooking, make the rest of the recipe.

Toast pepitas in a skillet. No added oil is necessary, but watch they don't burn. When they're toasted, set them aside.


Add the olive oil to the skillet and then saute the carrots and zucchini in it. Sprinkle dried choped onions (from the spice aisle), salt and pepper on the veggies while they cook.

About 3 minutes before the pasta is done, add the corn.

Cook ~2 minutes, then add the tequila and let it boil off.

When the pasta is done, reserve ~1/4 cup of the cooking water and then drain it.

Add the reserved water and veggies to the pasta. Stir to mix.

Add the pepitas and cilantro, and stir to mix. 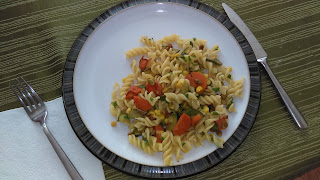 Source: I invented this one. It was probably inspired by something, but I can't remember what at this point.

Who eats it: Just me and Mr. Snarky. The kids eat plain pasta that I set aside before I add the disgusting veggies.
Posted by Cloud at 5:58 PM