One year, on New Year's Eve, I had a random idea. I decided we should have a "family fun list" for the next year, and we should write it as part of our family New Year's Eve celebrations. The kids and Mr. Snarky went along, and it was a big success, so much so that last year, when Pumpkin was asked to write about a family tradition in school, this is the one she picked. It may be my best parenting idea ever.

If you want to follow the entire history of the Family Fun List, you can click back one year at a time, starting with last year's list. The short version is: each family member gets to pick three things to put on the list. That gives us twelve things, and we try to do roughly one per month. Last year, we had a bonus item that we all agreed on, and this year that morphed into an item that we all agree on, but suggested by the person who had the fewest of their items done in the previous year. Because, yeah, we've never made it through the entire list.

We came close last year, though! We just fell one item short. Here are the details:
I usually link to the posts I wrote about our fun things, but I didn't write any last year. I'll try to do better this year!

Here are some tweets from the fun list outings:

The kids' favorite part of the San Diego Botanic Gardens is never the plants:

The kids ran part of the way home from the doughnut shop outing:

My feed's been a downer today. So, here's a picture of my kids running a race on our way home from getting doughnuts pic.twitter.com/ZMxk7fL5Ng
— Wandering Scientist (@wandsci) May 22, 2016

The pit of corn was on the San Juan Capistrano trip. There  is a petting zoo near the train station, and they also had a pit of corn.

I can't believe I didn't write up a post about visiting the Friendship Park, so I'll put some pictures here.

The beach on the US side is very empty! This is a popular place to go for a horse ride on the beach in San Diego county. There are stables nearby where you can rent time on a horse. 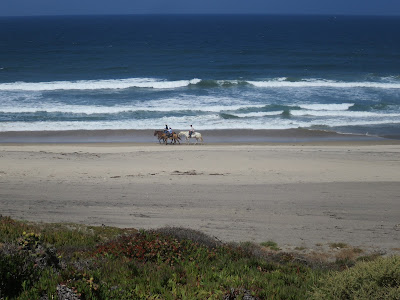 Here is the "friendship" part of the Friendship Park. Families and friends separated by the border can meet here and talk. 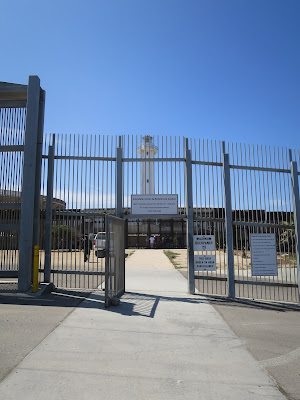 Only a small number of people are allowed in past this first fence on the US side at a time.  The inner fence is where the people get to meet and talk. I hear that it used to just be a chain link fence. Now it is a tall, fairly solid fence. You can see through it, but you can't touch through it. We didn't spend long in the inner area, because there were people waiting to talk to people on the other side, and we didn't want to delay them.

This is the border meeting the sea. 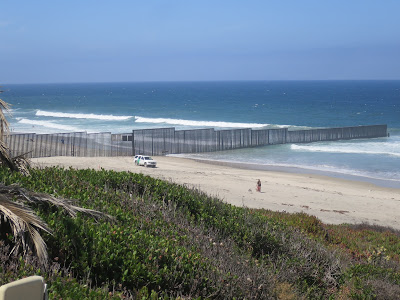 On the Mexican side, there is an art project where part of the fence is painted so that it disappears. Someday, I want to go see that.

This is the border headed east. 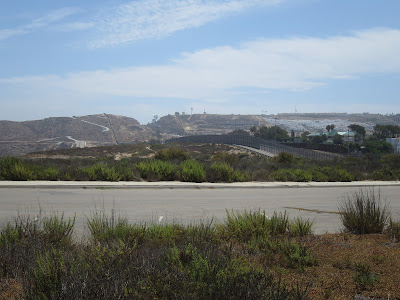 For readers who have never been to the US-Mexico border, I'll mention that this is some of the more hospitable terrain. Inland from San Diego, it gets very rugged in places. If Trump really does build a big wall, it won't be cheap. But that is politics and for another post.

Now, on to this year's list:
As you can see, there are some favorites that were repeated onto this year's list. I put Legoland on the list because my kids are approaching the age where they won't enjoy it as much and I want to get at least one more visit in. We may be able to time it during a promotion where we can get two visits for the price of one, and then we'll go twice. I can always convince Mr. Snarky to go to Legoland. The only downside is that he usually buys himself a big set when we go.