I think it is time to start posting stories from our 2017 road trip!

Our vacation this year started from Mesa. We'd left our kids there the week before, after celebrating my grandparents' 75th wedding anniversary with my family. We enjoyed a kid-free week at home before once again making the ~6 hour drive to Mesa to pick up the kids and start vacationing.

The plan was to leave Mesa mid-morning and drive to Sedona for lunch. My Dad warned me that there were often traffic jams on I-17 and maybe we should take a different route, but I was sure we could handle it. I must officially admit that my father was right. There was a several hour traffic jam on I-17, caused by a car fire. We ended up having to give up on Sedona and instead had lunch in Camp Verde.

(Aside: including the burned out hulk left after the traffic jam-inducing fire, we passed the aftermath of at least five car fires on this trip. Hot weather and mountain climbs are not a good mix, I guess.)

Anyway, our detour to Camp Verde turned out to be a nice one. We had lunch at Verde Brewing Company, a very good brewpub. It was so good that Mr. Snarky was tempted by the lifetime beer offer. 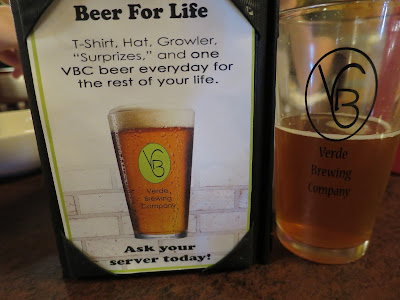 That is not an economical option for people who live in San Diego, though, so he contented himself with what the described as the best BLT ever and a pint of IPA.

We hadn't really acclimated to the heat yet, so no one had much interest in exploring Camp Verde. Everyone whined at me when I wanted to walk half a block to see this old building, which turned out to be the old prison. 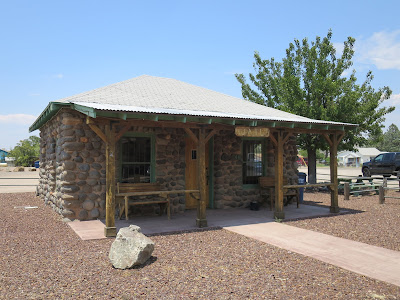 We got back into our air conditioned car and drove on to Walnut Canyon. This is a National Monument, so was our first chance to use our 4th grader parks pass. This pass was awesome, even if you don't consider the amount of money it saved us. Every ranger who saw that pass was very enthusiastic about it, and made Pumpkin feel special. I hope the program is still around for Petunia's 4th grade year.

Walnut Canyon is a beautiful spot, but what makes it really special is the chance to see and even go inside of the remains of Ancient Puebloan cliff dwellings.


I always marvel at how people lived in these canyons. They must have been very good climbers. The ranger explained that one of the reasons Walnut Canyon was a good place for the Ancient Puebloans to live is that the cliffs both offered protections from storms and made it easier to gather water.

After our short hike in Walnut Canyon, we drove on to Tusayan, a small town that is basically a base camp for visits to the Grand Canyon.

The next morning, we took the park bus to the Grand Canyon. We could have driven in, and were in fact up early enough that we would have been sure of getting parking. But the bus stop was right outside our hotel, and we liked the idea of helping to reduce traffic and pollution in the park. This time of year, the road that goes to the most popular overlooks and the in park hotels is closed to anyone not actually staying in the park, so we would have just been driving in to park our car, anyway. I think this is great: the buses ran frequently and the lack of cars made the visit a little more peaceful, even though there were still hordes of people.

I am rather pleased with how my plan for our Grand Canyon visit worked out. We started at the visitor center to pick up our Junior Ranger books. Every National Park, Monument, or Historic Site we visited had a Junior Ranger program: the kids complete some easy exercises, take a somewhat hokey pledge to protect the park and educate others about it, and then they get a badge. Our kids love collecting those badges!

After we collected our books, we set out to walk a portion of the Rim Trail. This was a long walk, but there were plenty of places to refill our water bottles, and I'd brought lots of snacks. We stopped frequently to admire the view, take pictures, and work on the ranger books. 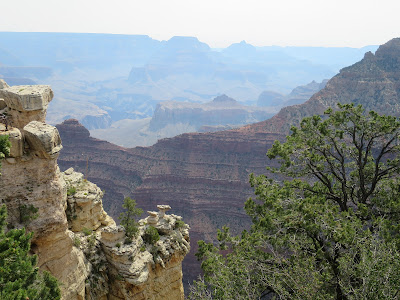 Visibility wasn't terrific for our visit, due to a wildfire in the region. We still got some nice views, though.


We did not do any hiking into the canyon, but we did get a great view of the famous Bright Angel trail. This is the trail that goes to the canyon floor.


Bright Angel is, unfortunately, a killer trail... literally. People die trying to hike to the floor and back in a day, particularly in the summer. It was a warm but not uncomfortable 90 degrees on the rim. On the floor, it was probably over 110. The signs the park service puts up warning people about hiking into the canyon are really explicit about the risks, and still people do it and get in trouble. People die of heat exhaustion and also of hyponatremia. People who are not accustomed to a dry heat don't always realize how much they are sweating! Still, some day, I'd like to hike that trail. I would not try to make it back up on the same day. The people I know who hike it and enjoy it always spend at least one night on the canyon floor.

Anyhow, we didn't do anything like that, and just stayed on the nice, flat, paved Rim Trail. We made it to the Village by lunchtime, and had lunch at the Bright Angel Lodge. The food was nothing special, but the old lodge is pretty cool. After lunch, we boarded a bus to Hermit's Rest. The wind had picked up, and so we didn't end up lingering at this stop or doing the short walk part of the way back that I'd planned. Instead, we had a snack, I failed to buy the water bottle in a leather pouch Petunia really wanted (I was sure they'd have it back at the shop at the Visitor's Center. They did not. I heard about this for the entire remainder of the trip.) and we got back on a bus. We got off to admire a couple of viewpoints, but then went back to the Visitor Center to get the kids their badges. From there, we got back on the bus back to the hotel.

On the way out of the park, the bus screeched to a halt. A car had stopped in the middle of the road. This seemed odd... but it turned out the occupants were admiring some wildlife.


The kids got their swim in the hotel, and we had dinner and decent margaritas at Plaza Bonita, a Mexican restaurant near the hotel.

Then next day, we drove into the park. We turned right at the Visitor's Center and drove to see the Tusayan ruin (pretty cool, the grown ups thought) and then the Desert View Watchtower.

The kids were more impressed by the Desert Watchtower, even though it is not nearly as old as the ruin. They liked climbing all the stairs, and Pumpkin liked taking pictures of the view. The watchtower was built in the 1930s, and was designed by architect Mary Colter, who drew from inspiration from the Native American buildings she had seen in the region. Some of the interior artwork was done by a Hopi artist named Fred Kabotie. It is an interesting reminder of the history of tourism at the Grand Canyon, and of our changing opinions about how to accommodate it. If you're curious, you can read more about the watchtower on this NPS site.

After admiring more views of the Grand Canyon and the desert to the East of it, we headed on out of the park. I'll pick up that story next time.
Posted by Cloud at 11:04 PM