In my last post about our 2017 Summer Road Trip, I wrote about our visits to Walnut Canyon and the Grand Canyon.

Not long after we left the Grand Canyon, we came to the Little Colorado River Gorge overlook. We were tempted to skip it. After the Grand Canyon, it was sure to be underwhelming, right? No, it wasn't. I'm glad we stopped. It is a much more compact gorge, but also a beautiful spot.

Our next stop was at a set of dinosaur tracks just outside of Tuba City. There is something awe-inspiring about standing and looking at the tracks of creatures so long extinct.


However, Petunia, our resident dino-lover, was underwhelmed. I think she prefers dinosaur bones.

Or maybe she was just getting hungry. We were running a bit later than I'd hoped, and she'd been promised McDonald's for lunch. She got her Happy Meal once we got to Tuba City, and perked up for our visit to the Navajo Museum, which was across the street from the McDonald's. This museum was not in existence the last time I came through Tuba City, and I was glad we got a chance to visit it. It provided a great introduction to Navajo culture and history.

On our way to Kayenta, we stopped to admire the Elephant Feet: 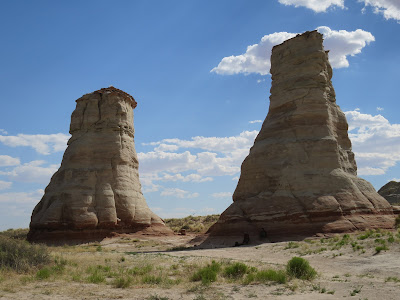 The drive to Kayenta and from Kayenta to Monument Valley was beautiful. I can't do justice to describing the scenery, with dramatic mesas and buttes, red rocks, and a brilliant blue sky dotted with fluffy clouds. It was the sort of scenery that made me wish I could paint. I could imagine retiring to the area and living out my days trying to capture the colors.

We pulled into Monument Valley not long before sunset. We had booked into The View, which is the only hotel in the tribal park, and promised that every room would have a spectacular view of Monument Valley. That promise was definitely fulfilled. I put the view from our balcony in the awards show post, so here I'll put a sunset picture Mr. Snarky took from the viewing area near the hotel restaurant.


The next morning, we got up to watch the sunrise from our balcony. It was beautiful and would have been peaceful, except Petunia was annoyed at being woken up early and periodically let us know that. Lesson learned: we should have just let her sleep while the rest of us watched the sunrise!

After breakfast, we met up with our guide from Dineh Bekeyah tours, who took us on a 2.5 hour tour of Monument Valley. This was one of the highlights of the entire trip for me. The tour took in a lot of famous monuments, a visit to a hogan that included a demonstration of traditional weaving techniques (sometime, I'll visit the Navajo Nation when I'm feeling wealthy enough to buy a rug... they are simply gorgeous), a look at some petroglyphs, and a chance to lie back against the cool rock while looking up at "the eagle's eye" and listening to our guide play his traditional flute. 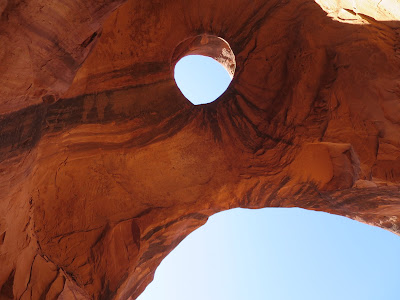 It was a great morning.

After our tour, we checked out of the hotel and headed north. We drove to a little town just outside the reservation, called Mexican Hat. It is named for a rock that looks like a sombrero. We saw its namesake rock as we drove out of toen, but our only stop in the area was at The Old Bridge Grille Cafe, where I had my last fry bread of the trip for lunch.

From Mexican Hat, we drove straight to Moab, a two hour drive through pretty country. We had thought we might try to watch the sunset at the Delicate Arch viewpoint in Arches National Park, but we arrived in Moab to discover that roadworks were underway in the park, and the road would be closed at 7 p.m., well before sunset. So we had a swim and had dinner, and saved the visit to Arches for the next day.
Posted by Cloud at 4:58 PM