In the last installment of my posts about our 2017 road trip, we were in Monument Valley. We drove from Monument Valley to Moab, and stayed a couple nights there. The main attraction of Moab was Arches National Park. I had been to this park before, but Mr. Snarky hadn't, and neither had the kids. Now, late June is not the best time to see Arches. It is hot there in June, usually in the high 90s. And there really is very little shade in Arches. So I didn't plan for any big hikes.

As it happened, it was even hotter than average during our visit, with a high temperature just over 100. We did attempt one short hike, out to see Landscape Arch. The kids got to a patch of shade along the trail, not far from where Landscape Arch comes into view and basically refused to go any further. Since I'd seen Landscape Arch before, I stayed with them while Mr. Snarky went ahead to see the view. 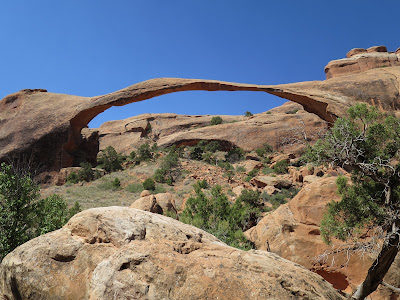 Suffice to say, the kids were not all that impressed with Arches. But Pumpkin was glad to find a lot of license plates for her license plate games- including Alabama, which had so far stymied her attempts to play an alternate version of the game where you have to find the plates in alphabetical order (she is currently looking for Florida). Petunia thought that Balancing Rock was pretty cool: 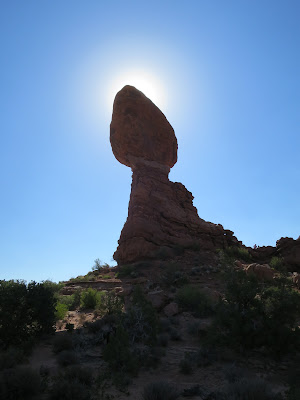 Both kids enjoyed scrambling around at The Organ, in the shade provide by Courthouse Towers: 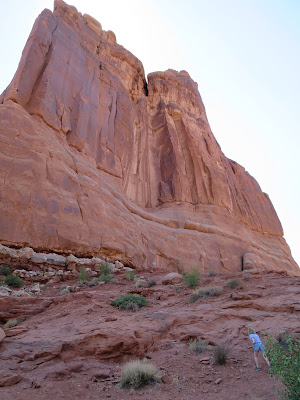 Mr. Snarky was so impressed with the scenery that he didn't complain about the heat. Perhaps I should print out photos so he won't whine when the temperature in our house gets to 80?

Perhaps because I'd seen Arches before, my favorite part of the time in Moab was the other stuff.

We stayed in a hotel called River Canyon Lodge. It had a nice pool, which we all enjoyed. We had dinner the second night at a place called Zax, which had a great upstairs patio. We enjoyed watching the colors change on the nearby rocks as the sunset while we ate. 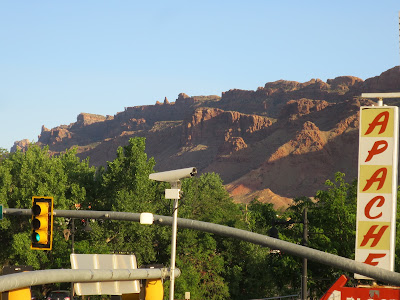 And the final thing we did before leaving town was drive out along Kane Creek Blvd in search of some rock art.

Our inspiration for this was a blog post that I found while sitting on that upstairs deck at Zax. I should have read that post more carefully, because it clearly states that the first rock art panels are on the RIGHT side of the parking area at the Moonflower Canyon campground. We looked on the LEFT side and then set off on a pointless hike up past the campground, on which I gathered approximately eight mosquito bites. OOPS.


But we found the Moonflower panels, and then continued on to the main draw: the rock with the rare "birthing panel." The drive was nice, although part of it was on a dirt road. The river and canyon are quite beautiful.

And we made it to the rock with the birthing panel, and yeah, it is awesome. 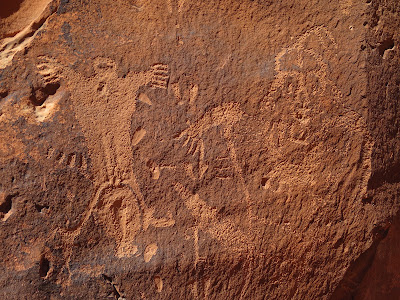 After seeing this, we drove out of town and headed towards Salt Lake City. I'll pick the story up another day.
Posted by Cloud at 10:27 PM