Weekend Reading: The I Guess I'm Getting Old Edition

If you didn't see it go by on Twitter, I'm just back from an absolutely wonderful 3 week vacation in New Zealand. I'll write more about it soon - I'll definitely do an awards show post like I always do, I'm just not sure if I'll put it here or over on Adjusted Latitudes. Then I'll write up a trip story type post over on Adjusted Latitudes as well.

I also want to write about our family fun list and my 2019 goals... and so much more! But I had more trouble getting past jet lag than I thought I would. It is only a 3 hour time difference (actually, a 21 hour time difference, but same thing...) but I really struggled this week. We came home on Tuesday and today is the first day I felt like I was in the right time zone. I don't know why I had so much trouble.

And then this morning, I tweaked my lower back by drying my legs after my shower. I felt it happen in the moment and still can't explain why it happened!

I think the answer to both of those things is that I'm getting old. Oh well.

Anyway, the combination of the two things means I don't have much to post today. Here's what I have:

If you nominate for the Hugos, here's Annorlunda Books' awards eligibility post.

Dara Lind is one of the best reporters I've read on the immigration beat. Her latest article about what is actually happening at the border is really good.

This is also relevant:


Drill down to local government and it's even more stark - in San Diego County, at least. Escondido, long considered one of the most immigrant-hostile cities in America, ousted its Trump-supporting mayor. https://t.co/1bRBIi3YAk
— Sara Libby (@SaraLibby) January 2, 2019

I don't think it is right to call this story about the 1950s TV show with an episode about a scammer named Trump "fun," per se, but it was an interesting read!

I liked this story about the medieval woman with Lapis Lazuli in her dental plaque.

This is a delightful short story about AI, disease monitoring, and birds. Read it!


I love this picture:

And to make up for the short post, I'll close with a picture of what I was doing instead. This is the bit of New Zealand coast where we spent 9 days of our vacation, viewed from the head at the south end. (For those who want details: This is Waihi Beach and the bits just south of it, viewed from the Bowentown Heads). I'm the person in the red shirt trudging up the hill. Pumpkin is next to me. Mr. Snarky and Petunia were faster than us. 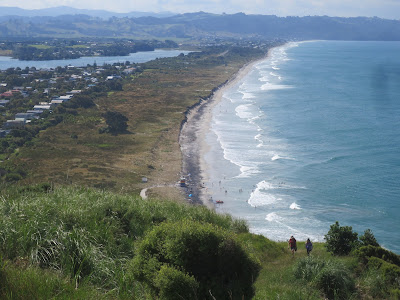 Note how few people are on the beaches below. It was a beautiful day during high beach-going season. One of the most striking things about a NZ beach holiday for a southern Californian is how few people there are at the beach!
Posted by Cloud at 5:02 PM