I have a nice long list of things I should be doing but I feel like writing one of my random update posts instead, so I will do that first.

My work had a holiday party this week. Inexplicably, given the lovely San Diego climate, it was indoors at an Italian restaurant. It is probably the riskiest thing I've done in 2 years covid-wise since my work (inexplicably, since we are a science-related company) does not have a vaccine or test mandate. I think all of the people at the party were vaccinated but I've been surprised by anti-vaxxers before, so I can't be sure. I bought some of the Binax rapid antigen tests and I used one this morning because I wanted to check before I have my daughter's Lego team over for a meeting today. We meet outdoors (in our garage with the doors open) and masked.  But still... I wanted to check. I did the test this morning and it was negative.

I don't think the party was worth it and I won't do anything similar anytime soon. I made the decision to go before news of the omicron variant came out. I don't know if my decision would have been different had I known about the new variant.

The home test is easy to do and doesn't take long and I wish we were making more use of these tests as a country.

My little family isn't changing much about our behavior due to the new variant. We were still masking indoors in public places, and we'll keep doing that. I may be more inclined to pull out one of our KF94s instead of using a cloth mask when I'm going shopping. We'll keep having the kids tested at school every week. We'll still visit indoors with other people we know are vaccinated and reasonably careful but we won't be eating indoors at a restaurant anytime soon. We may use the home antigen tests if we think we've done something potentially sketchy. Otherwise, we wait and see.

The news of the omicron variant came out the day after we bought tickets to fly to New Zealand next summer. We were all so excited about the chance to go see our New Zealand family again! Now we are in a "wait and see" on that, too. New Zealand has a very impressive vaccination rate, so I suspect we'll still be able to go. But I think it will depend on how the new variant ends up behaving and whether we've all had omicron-specific boosters by summer.

In more prosaic news... when we had to switch to cleaning our own house during the early days of the pandemic, we realized our kids didn't really know how to clean things well. They've gotten better with practice, but Mr. Snarky and I think it might be a good idea to keep cleaning our own house for the time-being, to let them practice some more. We also decided that the kids should get some immediate benefit from this, mostly because I thought that would minimize the whining about it but also because the decision is going to save us some money and since the kids' labor is making that possible, it seems fair they should get something for it.

So we presented it as a choice: we can keep doing the chores and we'll double your allowance or we can find a new cleaner in January. Pumpkin was on board right away. Petunia was skeptical, but came around when I said we could use some of the money we're saving to fund another theme park trip sometime next year.

I typed up a new chores rotation this morning and the deal is that everyone just looks at the list and does their chores without me having to hassle them. We'll see how it goes. The cleaning itself doesn't take much time, since we've divided things up among four people. But if I find I have to hassle/remind people I may cancel the deal and hire a cleaner again.

We put up our tree last night. 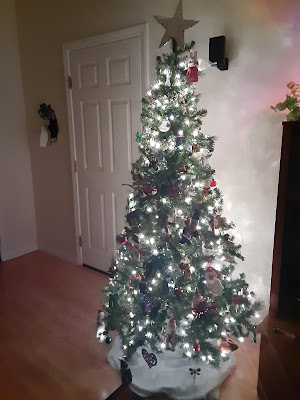 I hope you all are having a good weekend! And I hope to write more soon. Next up will probably be an Adjusted Latitudes post about the recent weekend getaway Mr. Snarky and I took. Stay tuned...