We took Pumpkin to Seattle last weekend. The weekend had a lot of firsts in it: our first trip to a city other my hometown with Pumpkin, Pumpkin's first plane ride, Pumpkin's first boat ride (the ferry to Bainbridge), Pumpkin's first night in a hotel.... One of the most surprising thing about the weekend was how well it all went. We did several things right:

1. We had bought a cheap umbrella stroller to take on the trip. However, at the last minute, 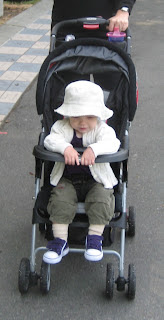 I decided that we should take her regular "city" stroller (also a relatively cheap stroller, at least compared to her off-roading jogging stroller), because the seat in her regular stroller reclines. I had a vision of Pumpkin napping in her stroller while we sat in a brew pub and drank beers. This didn't really happen- she certainly napped in her stroller. She likes to sit very upright, with her arms on the tray that hooks across the front of her stroller (as shown in the photo). When she got tired, her little head drooped down, until it was resting on her arms. I would stop, gently tilt her back into the seat, and then recline the seat before continuing on her way. However, she almost always woke up when we stopped for drinks. I still got a beer or two, though- Pumpkin was generally happy to sit in a high chair and eat crackers while the adults drank beers.

Even if my vision did not come true, taking the reclining stroller was a very good idea, because it meant that Pumpkin could nap while we walked around and were tourists. The better touristing definitely compensated for the little bit of extra hassle in the airport (the stroller only folds flat with the seat reclined, so folding it down for security or when boarding was not as fast as it would have been with the umbrella stroller).

2. We took lots of snacks. We had all of her favorites with us, and this meant that she would always eat something when we were at a restaurant, even if she wouldn't eat the restaurant food.

3. We made an effort to find places where she could run around. On Friday, we stopped after a long stretch of stroller time and let her explore Pioneer Square. For those who don't know Seattle, this is a pleasant square with trees and chairs... and homeless guys. Pumpkin made friends with a lot of the homeless guys, who seemed to appreciat eth joy she took in the birds in the square. One guy in particular just broke into the biggest grin every time she came near him. Several also offered her advice, mostly along the lines of listening to her mother. She has not shown any signs that she plans to heed their advice.

4. We requested a crib for Pumpkin. This allowed us all to sleep better. Pumpkin is a very active sleeper, and since we aren't regular co-sleepers, I don't tend to get very much sleep when I'm sharing a bed with her. We did bring her into bed with us when she woke up at 5:30 on Saturday. She nursed, and then snuggled in and went back to sleep- and we all slept until 7:30. The quality of sleep was one of the biggest surprises of the trip- Pumpkin slept better than she does at home. It was wonderful.

There were also some things we could do better next time:

1. We didn't eat dinner early enough. We always had the best intentions, but things kept coming up that kept us from getting to dinner "on time". This meant that Pumpkin was pretty hungry by the time we sat down at a table, so she tended to fill up on the bread at the table or the snacks we had with us.

2. We didn't think to ask about a fridge or a bath tub when we booked the hotel. A fridge would have meant that we could have had cold ice packs to use to keep milk cold for Pumpkin during the day. As it was, we had to keep asking restaurants to rinse out her sippy cup and put fresh milk in it. And no matter how carefully we asked, they always filled the cup to the top. Pumpkin had no hope of ever finishing all the milk they gave her.

No bath tub meant that we had to try to give Pumpkin her first shower on Friday night. She was NOT impressed, so we skipped it the next night, and made a note to practice taking showers at home.

3. It would be better to get Pumpkin her own seat on the airplane. She would still probably have wanted to walk up and down the aisle several times on the flight to Seattle, but having her own seat would have made it easier to entertain her while we were seated. She is just a little too big to sit on my lap and have the tray table down, so it was hard to let her color with the special mess free markers I'd bought, which only color on the corresponding special paper, and we kept dropping toys and books.

On the way back, Pumpkin fell asleep and slept most of the flight. I still wished for her to have her own seat, though, because I could hardly move for the entire flight. However, I did manage to drink a ginger ale, which is more than I managed on the flight up.

Overall, we judged the trip to be a resounding success. Pumpkin really seemed to enjoy riding around in her stroller checking out the new sights. I enjoyed seeing things with her enthusiasm- it has been too many years since I looked at a bird banking in the draft from a ferry with the proper awe or appreciated the giant concrete balls serving as a traffic break for a building for their slalom course potential. Pumpkin quickly sorted me out on these points, and many others. I'm looking forward to more trips with her. I know that can't all be this good,
but now I also know that they certainly won't all be as bad as some of the horror stories I've heard.
Posted by Cloud at 9:02 PM