Pumpkin's day care uses time outs when a child does something particularly bad, like bite another child. We've been making limited use of them at home, too, also only for physical violence. When Pumpkin bites or hits one of us, or pulls my hair, and doesn't stop after a couple of warnings, she gets a very short time out. Hubby, who is the one who started using this technique, decided that the time outs would be performed by sitting in front of the dishwasher in our kitchen.

Lately, Pumpkin has started giving herself time outs. This invariably happens when she's pretty wound up during a play session- giggling and hugging and tugging on us. Sometimes, she'll pull my hair or hit Hubby. Even on the first warning, she will sometimes starting talking about sitting and "no, no", and march herself into the kitchen to sit in front of the dishwasher. Hubby and I will just watch her go, and wait for the (rather convincing) fake crying that starts as soon as she sits down. We'll let her sit there for 20 seconds or so, and then go out to pick her up. About half of the times, she'll immediately pull hair or hit again. When this happens, we just try to redirect her to a calmer activity, since time out seems to be part of the game. The other half of the times, she'll go to the person she hurt, sign sorry on that person's chest ("sorry" is a closed fist circled on the chest) and say "sorry". Then she'll kiss it better, and go back to playing. Sometimes, if I'm the person she hurt, she'll also trace tears on my cheeks. This is the sign for "crying", but she uses it to mean "sad".

We're not really sure what this self punishment routine means, or what, if anything, we should do differently. I think I'll go back and reread some of the parts of Playful Parenting

, by Lawrence Cohen, to see if I get any ideas.

I do worry that she has inherited my generous capacity for self admonishment. I will often (over) analyze events that didn't go exactly how I wanted, and find things to blame on myself. If only I'd said X...., I'll think, or Why did I do Y??? I have worked hard to control this tendency, particularly in the work place. I have always assumed that this tendency is cultural, or at least learned. Has Pumpkin really learned this already? Could there also be a genetic component? Some gene or combination of genes that makes us more prone to find fault in ourselves? I don't know if that is a liberating thought (its not my fault!) or a terribly depressing thought (there is nothing I can do).

However, while a new little self-critic is in the making, the older one is getting better at going easy on herself. Tonight, I made the crusts for the pumpkin pies we'll have for Thanksgiving. I'll make the fillings tomorrow night. We're going to have 13 people here for Thanksgiving, so I'm making two pies. One of my crusts turned out great- it didn't shrink or crumble. The other crust shrank badly in a few spots, so that the top of the crust almost turns down into the center. 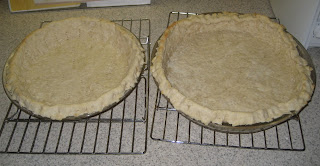 In past years, I might have been tempted to throw away the offending crust and try again. Not this year- I shrugged and moved on to the next task on my list. Maybe my little Zen master is having more success than I thought.
Posted by Cloud at 8:52 PM