Back on New Year's Day, when I was griping about the bad parts of our recent trip to Kauai, I promised to come back and tell you some of the good parts. There were lots of good parts, and it was great to see Pumpkin playing with both sets of grandparents, and to watch her get to know her Nonna and Poppa, who live in New Zealand and don't get to visit her nearly as much as my parents, her Mimi and Boppa, who live in Arizona.

Pumpkin was slow to warm up to the gift-opening ritual of Christmas- it was almost as if she thought having all those people around to dote on her was gift enough. But when I finally did get her interested in opening her gifts, she liked what she got. Due to the distance traveled by all the gift-givers (and perhaps the predisposition of our families), she got more books than toys, but she is not old enough yet to think there is anything unusual about that. And she may never think that is unusual- after all, Hubby and I got a lot books, too! She has picked several favorites from her new collection, and they'll start appearing in the "What Pumpkin's Reading" sidebar and on her reading list soon.

Pumpkin was also slow to warm up to the water, having forgotten that she eventually learned to like the water during our visits to the bay this summer. Once again, the third time was the charm, and it wasn't until our third visit to a beach, on our last full day in Kauai, that Pumpkin got in the water and played. One of the reasons I chose Kauai as our destination was the large number of good "baby beaches" (beaches with natural or man-made breakwaters that create calm conditions), and one of the reasons I chose the beach house we stayed at was its proximity to two baby beaches, so I was very happy that she did eventually get in the water. And she had a blast playing with her Mimi once she got in.

One of the other reasons we chose Kauai was the large number of outdoor activities it offers. It has excellent hiking and kayaking, two things Hubby and I liked to do before pumpkin was born but don't do much anymore. We figured that with two sets of grandparents to provide babysitting, we'd get some activities in. In the end, we only went on one hike. It was too windy to kayak most of the time we were there, and we didn't have as much time as we thought we would. The one hike we did was a good one, though. We drove up to the end of Waimea Canyon Road, stopping to enjoy the view along the way. My sister came with us, but Pumpkin stayed back at the beach house with the grandparents. 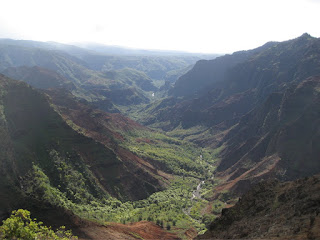 At the end of the road, we set out for a hike. Our plan was to take the Pihea Trail to the Alaka'i Swamp trail. We never made it to the swamp trail, which was a disappointment to me, because the swamp sounded very interesting. Our guidebook said it is the highest swamp in the world and promised other-worldly scenery. Unfortunately, the Pihea trail was quite muddy, which combined with my less than stellar fitness to slow us down. This photo is from a relatively easy part. It may look like I'm waving my arm in a carefree manner towards the tree, but I am in fact holding on, hoping the tree will help keep me upright: 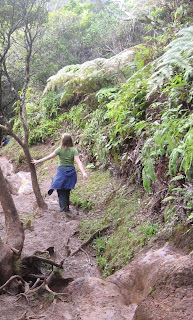 Also, Hubby bounded up the "optional" side trail to the Pihea Vista before I could stop him. The guidebook warns that this is a tough climb up, and it was, requiring me to use my hands and even my knees on occasion. Any trail that is that hard to get up will almost certainly require some butt-sliding to get down, at least for me. Hubby, who is much more of a mountain goat, had fewer problems. For all of these reasons, it took us much longer than we anticipated to get to the turn off to the swamp trail, and we reluctantly decided to abandon our original plans to go down that trail. I'm glad we did, because I was pretty tired by the time we got back to our car. But I'm still disappointed. The hike was good, but I will add my warning about the Pihea Vista to the warning in any guidebook you look at- sure, the view at the end is beautiful, but you can get pretty much the same view from the far less muddy view point at the parking lot at the trailhead, which is in fact where this picture was taken: 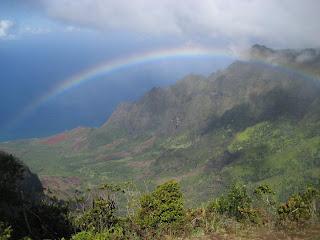 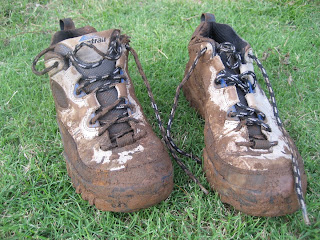 We stayed in Kapa'a, mostly because I couldn't find a big enough house in sunnier Poipu, and because I had read that the North Shore would be pretty rainy in December. We did drive up to the North Shore a couple of times, and it was indeed rainy. But it was also beautiful. We didn't have the time (and, to be honest, I didn't have the gumption) to hike any of the famous Kalalau trail, but we did drive to the end of the road and visit Ke'e Beach to get a peek at some of the Na Pali coastline. We had to take turns going to look at the beach and the razor sharp cliffs above it, though, because Pumpkin was napping in her car seat, and not even beautiful scenery and a wonderful beach made me want to wake her up. Well, I considered it, but quickly decided against it. Perhaps because we were hurrying to minimize the risk that Pumpkin would wake up and not get her full nap, we didn't actually get very good pictures of this spot, which is a real shame- it was fantastic. I'm sure you can find someone else's wonderful pictures if you search online, though.

We also visited the Kilauea Lighthouse (an extremely picturesque bird sanctuary), ate shaved ice at one of the shops reckoned to be the best on the island (it was good), and relaxed on the balcony of our beach house, looking over the odd concrete patch directly in front of us out to a very nice view of the canal and ocean: 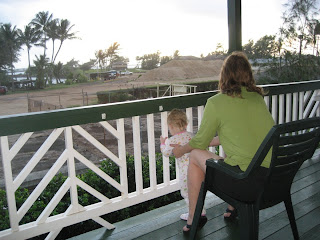 We even found time to go down to Duke's at the Marriott on Kalapaki Beach and have drinks while watching the waves roll in and the other tourists stroll by. (My drink is the ridiculously fruity one with multiple types of rum- Hubby had to drive us home, so stuck with beer, poor guy. I like beer, but I didn't intend to drink it when good fruity drinks were on offer!) 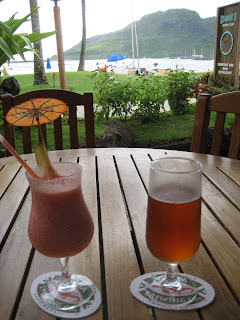 I'm not sure what my favorite part of the vacation was. Maybe it was having that fruity drink in a picturesque location with Hubby, just like we used to do. Maybe it was watching Pumpkin play with the extended family, and getting a chance to catch up with everyone myself. Or maybe it was watching Pumpkin play on the beach and (eventually) in the water. But I know what Pumpkin liked best- the chickens! Kauai has lots of feral chickens and roosters ("Daddy chickens"), and Pumpkin loved to watch them and tell us what they say ("Pok! Pok!" at high decibels). She also liked the nene we saw at the lighthouse. Maybe when she's older she'll have a greater appreciation of the more usual tourist sights.... or maybe she's destined to be a bird-watching tourist, like her Mimi and Boppa. Regardless, it was a good vacation.
Posted by Cloud at 6:47 PM