Petunia is almost 12 lbs now. I'm amazed by this- Pumpkin wasn't that big until she was about 3 months old. Petunia is 8 weeks old now, and she seems simultaneously huge and tiny. Her growth has followed a more "normal" progression than Pumpkin's did- she's gained roughly an ounce a day, sometimes more, whereas Pumpkin was a slow grower. Petunia is a rounder baby, with extra chins and chubby cheeks. Pumpkin never had chubby cheeks, and has always had only one chin.

Still, I can see the resemblance between my two daughters, both in their looks and in their mannerisms. Petunia gets the same little self satisfied look after nursing as Pumpkin did. She turns her head to one side, presses her lips together, and half-smiles. Pumpkin did exactly the same thing. I wonder, is this a universal baby thing? Or is it somehow encoded in my daughters' DNA? It appears almost immediately- too early for it to be something they have learned from me or Hubby.

Pumpkin came home from day care a couple of Fridays ago with stories of a scary movie her class watched. She told us that there were dinosaurs and big cats, and that she was scared and had to cuddle on her teacher's lap, and then leave and go next door to the younger toddlers' room. Hubby asked on Monday, and the movie was Ice Age (although now that I see the synopses, I wonder if it was the third Ice Age movie instead). Pumpkin was the only one in her class who was scared.

Hubby laughs at this, and wonders how in the world this can be an inherited trait. I won't see scary movies, either, and consider a lot of things scary that other adults would just call interesting. In general, I like Sci-Fi movies (sometimes scary, but clearly not real), Jane Austen movies, and kid's movies. (Strangely, I am also a huge fan of British detective shows. I think it is because they are more focused on the puzzle of the mystery than the tension of having a murderer on the loose.)

We were talking about this over Thanksgiving, and I was reminded that I had to be carried screaming from a showing of Fantasia when I was a child. My Dad confessed that he made his parents leave Snow White and the Seven Dwarfs. So maybe it is an inherited trait, but is it inherited via genes or via uprbringing? Nature or nuture? I suspect an influence from both- my sister and I had similar upbringings, after all, but she will go see movies whose trailers I can barely stand to watch. Some studies have found specific alleles of dopamine receptor D4 and the serotonin transported HTTLPR associated with risk taking behavior.* Sensitivity to tension in movies is a bit like an aversion to risk taking.... Of course, Pumpkin is happy to take risks in some situations, and so am I, so it is obviously more complex than this.

When I was a kid, we used to ask my mother for a Christmas wish list. We would roll our eyes at the list she produced: black eyeliner, white socks, nice note cards... We couldn't understand why she didn't have more interesting items on her list.

Two weeks before Thanksgiving, Pumpkin's day care sent us a homework assignment. (I know! The nerve of a day care center to give me, their paying customer, a homework assignment!) We were given the outline of a turkey and asked to decorate it in a way that reflected our family. Hubby had the brilliant idea of turning the front half of the turkey into a kiwi bird, thereby neatly capturing our combined New Zealand-American family. I decided that we should give the turkiwi some construction paper feathers, just like we used to do in grade school, and that each feather would have a picture pasted to it. The pictures would represent something important to at least one family member. Here is the end product: 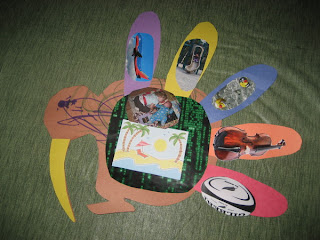 I easily selected a picture of a Southwest airplane (which brings Mimi over to play with Pumpkin and give her parents a much needed break), a picture of Pumpkin going down a slide (her current playground favorite), the rubber duckies from our wedding, and a rugby ball for Hubby (during the appropriate season, we have other rugby fans over once a week to watch a game). The Matrix-inspired background seemed obvious for a family headed by two computer geeks, and we all love the beach.

But what to use to represent my own interests? I was stumped. I eventually settled on a violin, even though I haven't played since before I got pregnant with Petunia, and wasn't even making my post-Pumpkin goal of one Irish session per month before that. It was, however, the closest thing I could think of to an interest that isn't related to my children or my work.

And suddenly, I understood my mother's Christmas wish lists. As I sat at our dining room table, pouting a bit about my lack of hobbies, I realized that my Christmas wish list this year would read a bit like my mom's did when I was a kid: lotion/shower gel set, book of kid-friendly recipes, nice note cards...

At least I'm fairly certain that this trait is not genetically determined.