We just got back from a brief visit to Wichita, Kansas. You're probably wondering "why in the world did they go there?"- at least, that's what everyone in Wichita asked us. We went because a good friend of ours was getting married there. Hubby was also excited to get to cross another state off his list (he wants to visit all 50 states, and he only gets to cross the state off his list if he stays the night).

Regardless of why we went, we had a surprisingly good trip. Surprising not so much because of the destination (although I'll be honest- Wichita was not exactly at the top of my "must visit" list), but because we were taking a short trip across two time zones with two young children- and there was no direct flight from San Diego. There were some rough patches, primarily around Pumpkin's continuing refusal to use the potty when she needs to and her on again, off again refusal to eat her meals. But then I gave in- we let her wear pull ups whenever she wanted, and I stopped caring whether she ate the chicken strips ("they have pepper!") or applesauce ("I don't like this applesauce") or any of the other foods we bought at restaurants because we she normally likes them, and just bought more of the healthy(ish) snack foods we knew she'd eat... and suddenly, we were having fun. Although Pumpkin did discover, to her horror, that it is possible to have an accident in pull ups if you don't let Mommy change them from time to time.

The observant reader will have noted that the rough patches weren't the flights- both girls did great on all four flights. As I tweeted yesterday, it seems that the universe is compensating me for my babies who won't sleep through the night by making both of my girls excellent travelers.  As usual, we brought lots of activities for the plane rides. And, as usual, we didn't need the majority of what we'd brought. Pumpkin mostly drew and colored- including this piece, which may be her first self portrait, done in a sadly impermanent medium: 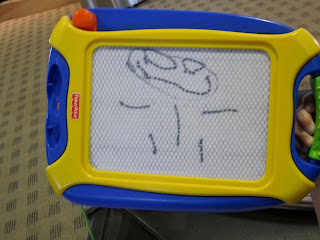 Petunia spurned all of the toys we brought for her, and played primarily with the bag Pumpkin's travel harness

came in and with the empty plastic cups from our drinks. (The travel harness worked great, by the way, as did the travel vest

I bought for Petunia.)

Anyway, we had two days in Wichita. We started the first with a trip to the Sedgwick County Zoo, which is a great zoo. Don't get me wrong- I love our San Diego Zoo, but it is so big that even as a member who can come back as often as I want, there are some animals I haven't seen in years. The Sedgwick County Zoo is a more manageable size. I think that if my kids were a bit older, we would have seen most of the animals. As it was, we focused on the Children's Zoo, which is a cool collection of farm animals from different regions (Asia, the US, and Africa) and the North American exhibits (because there were buffalo and bald eagles and other animals that our zoo doesn't have), with a brief diversion to see the penguins. 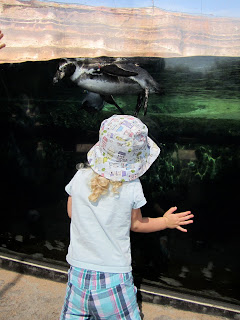 There was a boat ride that looked like it would be nice, but Pumpkin didn't want to go on it, and we didn't see the point in forcing the issue. Really, the only bad thing I have to say about this zoo is that the service in the cafe was terribly disorganized. I think the closest thing we had to a meltdown all weekend was the mini-tantrum I threw, storming out of the cafe after waiting 15 minutes, finally getting to the counter, and having the woman behind the counter turn away to help someone else. Who was behind us in the line. The food did not look inspiring, I was 99.9% sure Pumpkin wouldn't eat anything we bought, and I was fed up- so I stormed out, with a perplexed Pumpkin ("where are you going Mommy?"), an exasperating Hubby, and an unconcerned Petunia trailing behind. We ended up eating at a Texas Roadhouse (the source of the spurned applesauce mentioned above- Pumpkin didn't like the cinnamon they put in it), where at least Hubby and I liked our food, and I was reminded that my job could be a lot worse. I don't have to stop what I'm doing whenever a particular song is played over the stereo and start line dancing.

By the time we finished lunch, it was past nap time. The girls napped in the car while we took a short driving tour of Wichita, and then we returned to our hotel to get ready for the wedding. That also went surprisingly well- Petunia had to go crawl around in the hallway outside the ceremony, but Pumpkin sat through the entire thing quietly. And they both did great at the reception. Pumpkin in particular had a great time. She is still talking about how she got to dance with the "wedding girl" and eat cake when it was dark outside. She also danced a lot with her Daddy, and charmed many strangers with her unique conversational style. The bride was beautiful, the cake was excellent, and it was an all around good night.

The next day, we started off with a trip to see the Keeper of the Plains, which was as striking as it sounded from the descriptions we had read. 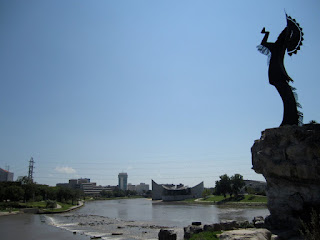 Then we went in search of lunch. The restaurant I had chosen from Yelp was closed on Sundays, so we went to a restaurant we'd seen advertised on TV during the short time we had watched it- Spangles. This was a BIG win. Spangles is a fast food diner, complete with 50s music, yummy milkshakes, a retro highchair on wheels. Everyone had fun.

After lunch, we went to the Exploration Place, which is a science museum aimed primarily at kids. Pumpkin and Petunia both enjoyed the play area- but Pumpkin's favorite part was the exhibit called "Grossology", which was about snot, and farts, and other gross things about the body. It made us think that we really should take her to our local science museum and/or kid's museum sometime- we tend to think of her as too young for exhibits, but that is no longer the case.

We left the museum and took another driving tour for nap time. Then we played in our hotel pool for awhile, and went out to dinner. Pumpkin was again very well behaved, and Petunia slept through most of the meal. We went back to our hotel feeling very happy about our trip... until I realized that I'd lost my (sort of expensive) sunglasses. I'm sure that I took them in to the restaurant with us, but I didn't have them when I was repacking my purse at the hotel. We called the restaurant, but they couldn't find them. That was a bit of a downer to end the trip. But still, if the you can take a trip with two kids, four flights, and one wedding and have the biggest complaint be that you lost your sunglasses.... that's a pretty good trip!
Posted by Cloud at 10:17 PM