Things have been a little hectic here, with her health scare and preparations to get our house tented for termites, so this post is late. I do have a reputation for sending my birthday cards late, so maybe the tardiness has nothing to do with the circumstances and everything to do with the author... who knows?

Anyway, I wanted to write a short post about some of the things Petunia's been up to, since one of the reasons I blog is to try to capture the things in my life and my childrens' lives that I don't want to forget.

But where to start? In her very first photo (which I can't show you, because Hubby and I have agreed that there will be no faces on this blog), Petunia had an expression that can only be described as suspicious- as if she were looking at her Daddy and the bright lights of the OR and wondering why she had been unceremoniously yanked from her cozy home for this?

She still treats us to a suspicious or quizzical look from time to time- it is one of her "trademarks"- but overall, she's a very happy baby. She is quick to give us a big grin (especially now that she seems to be feeling better). She has a wonderful belly laugh that she uses frequently. She plays a mean game of peekaboo. She waves me off to work every day with a big grin, and a big, full arm bye-bye wave. Some times, she even says "buh", too. (Hubby gets the accusatory, "you're abandoning me" tears at day care. I get the big, "glad to see you!" grins at pick up. I definitely have the better end of that bargain... until I get home and try to make dinner. But I digress.)

My parents gave her a walker for her birthday, and the smile on her face when she realized that she could walk with it was beautiful. She definitely enjoys it, but is still finding her walking legs. She often kneels to push it around, and when she really wants to go somewhere, she abandons it and crawls away: 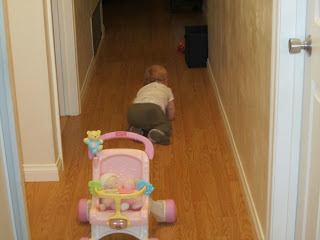 She loves to swing... 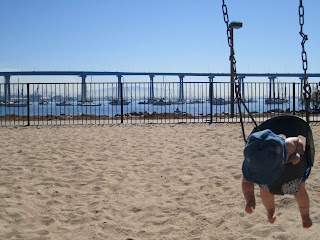 ... and to play in the water, whether that is in the bath, at the beach, or in the paddling pool in our backyard. 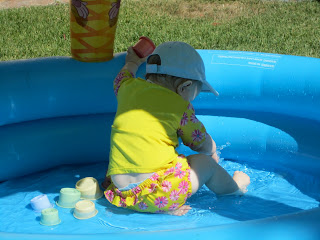 She loves all toys that have buttons she can push to produce music. She bops along to the music, and looks around with a big, expectant grin, waiting for everyone else to dance, too. We always do. It is not clear if she loves the music for its own merits, or because when she produces it, she can make us all react. We don't really care- we love this, and both our gift for her and Pumpkin's makes noise. Yes, we, her parents, bought her TWO noisy toys for her birthday. The force is strong in this one.

Pumpkin's gift was a baby computer

, because Petunia has been trying for months to get her hands on the toddler computer

we gave Pumpkin for her 3rd birthday. About a week before Petunia's birthday, though, Pumpkin relented and said that Petunia could play with her laptop. ("I don't matter if she plays with it" is how she phrased that- the misuse of the "doesn't matter" phrase is one of the few cute malapropisms Pumpkin still has- that girl isverbal. But this post isn't about her.) Pumpkin loves to make her little sister happy. Usually.

Petunia rewards her sister (an her parents) with sloppy, wet kisses. Or she could be teething on us- its hard to say. She has a mouthful of teeth, which she seems willing to use to try out some non-pureed foods. She like graham crackers best, but also eats bread and strawberries with gusto. She won't touch cheese yet. Cooked carrot sticks were an early favorite, but lately, they get unceremoniously tossed to the floor. She had her first taste of piklets, a New Zealand specialty that is similar to a pancake (but smaller and a little sweeter) and liked them. She also likes french fries (of course she's had these- she is the second baby, after all), so she seems to be embracing both her Kiwi and American heritage.

She's not really talking or signing yet, but she seems to be getting close. She's tried out some sounds to indicate that she wants a cracker, and tonight, she may have tried a sign- but she is also very good at communicating with just a meaningful look. She's quite persistent, and usually gets what she wants. She seems like a very mellow baby, but already we can tell that she isn't going to be pushed around. She is very determined when she wants something, and won't be easily distracted. She usually doesn't throw a big tantrum when we prevent her from getting what she wants. She protests briefly (but loudly), but then seems to allow herself to be distracted... but as soon as she gets the chance, she crawls right back to her original target.

She's growing fast, as babies do. Sometimes I look at her next to her sister and am struck by how quickly it is all going. Before I know it, there will be no baby in my house- no baby to chase around taking leaves and rocks away from before she eats them. No baby to play peekaboo with. No baby to nuzzle and rock to sleep. So on the night of her birthday, I rocked her a little longer than I had to before I put her down, and I got a little misty-eyed looking down at her sweet, sleeping face. Happy birthday, Petunia. It has been a wonderful year.
Posted by Cloud at 10:20 PM