Last week, we took a short vacation to Zion National Park in Utah, for a family reunion. Once again, Pumpkin and Petunia were great little travelers- honestly, Pumpkin handled the annoyances of our day traveling to Zion better than I did. Let's just say that I was not too happy to arrive at the San Diego airport and see gigantic lines inside and out. %$#@! cruise ships, I muttered, over and over.  We're going to Utah!, Pumpkin exclaimed to anyone who came within earshot. I should learn from her.

We flew to Las Vegas. The flight was full of very happy people heading off for a weekend of partying. Petunia actually cried a few times, but no one noticed. We were far from the noisiest group on the plane. For anyone nervous about taking their young child on a flight, I'd recommend a short flight to Vegas as a good practice flight. It works on the same principle as the idea of eating in brewpubs- the adults are all pretty happy and a bit noisy, and tend to be far less judgy about what your kids are doing.

We got our rental car, got the car seats in the rental car (always fun), and headed out. It quickly became apparent that we weren't going to make it to our hotel in Utah for dinner with the rest of the family, so we decided to stop in Mesquite, Nevada. We bought our supplies for the weekend at the local grocery store (we'd been warned that booze might be harder to get and more expensive in Utah, so we stocked up on beer as well as the more prosaic essentials like milk and Pumpkin's favorite breakfast cereal- I have no idea if this was necessary) and asked for a good place to eat dinner with the kids. The helpful clerk directed us to our only option that wasn't fast food: a local diner called The Home Plate. It was pretty good. It was also packed with teenagers having their dinner out before homecoming, which required me to try to explain the concept of homecoming to Hubby. I didn't do a very good job. For my international readers: it is a dance and a football game, and some alumni are around. If you want to know more, ask Google. It will probably tell you more than I could.

By the time we left, it was getting dark, and we didn't see the landscape we were driving through. That is a shame, because when we drove back at the end of the weekend, we realized that it is actually a beautiful drive, particularly the little bit in Arizona: 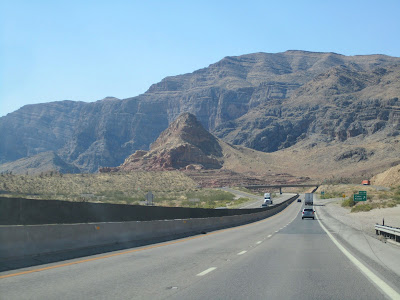 I have now added "the drive from Vegas to Zion" to my list of things that were surprisingly nice (joining Boise, Idaho and Brisbane, Australia and probably some other things if I stopped to think about it).

Petunia slept most of the drive, and was not at all pleased when we strapped her back into her car seat after dinner. It probably shouldn't have surprised us that she was really, really, happy to be let out when we arrived, but it did. She crawled around and around in our hotel suite- which was really like a one bedroom condo- giggling, and smiling, and just generally having a good time. It was fun to watch. Everyone went to bed a little late.

When we got up the next morning, we weren't disappointed with the location. This was the view that greeted us when we opened our door: 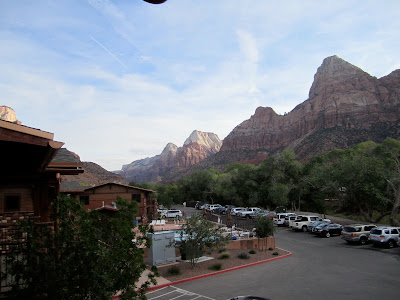 Zion is every bit as beautiful as you've heard. Our hotel, the Cable Mountain Lodge, was literally right outside the park. We crossed a bridge into the park from our parking lot. It was a beautiful spot.

The reunion was great. Pumpkin loved meeting her cousins and aunts and uncles (really my aunts and uncles). We also did a little bit of standard sightseeing. We took the scenic drive out toward the eastern entrance to the park. That was indeed scenic. I took photos from the car as we drove (we didn't stop much because were hoping the drive would make Pumpkin nap- it didn't). Here is one of the many beautiful scenes we drove past: 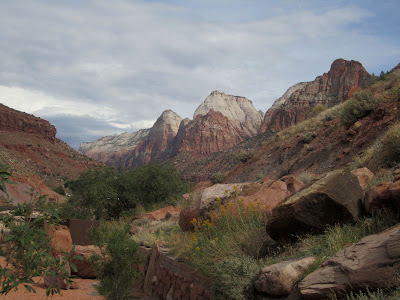 We also took a short (1.5 mile) hike with the kids. Pumpkin was excited to go on the hike, and did fairly well. But it is a good thing my Mom had brought an umbrella stroller for her, because she definitely used it. The hike was to a pool that was supposed to be emerald, but was a little cloudy from the rain we'd gotten the night before. It was still very nice, and there was a waterfall you could walk behind: 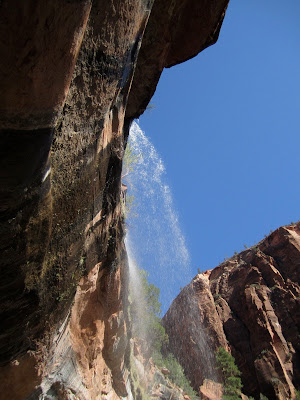 After our hike, my Mom volunteered to watch the kids while Hubby and I went into town to get lunch. Springdale is a nice town, with the shops and restaurants basically spread out along one road. We ate a good lunch at a place called Oscar's. Hubby got to try the Polygamy Porter (from Wasatch Brewing Company), which was something he'd wanted to do. I had the pale ale. Neither were really memorable, but they weren't bad, either. And it is always nice to get to have a meal and a drink without anyone whining at me.

We drove back to Vegas the next day. We arrived early in the afternoon and spent the night... I'll write that up separately, I think.
Posted by Cloud at 9:32 PM